19-year-old sneaks into Anchorage tunnel and sets up apartment, with a table and a cat 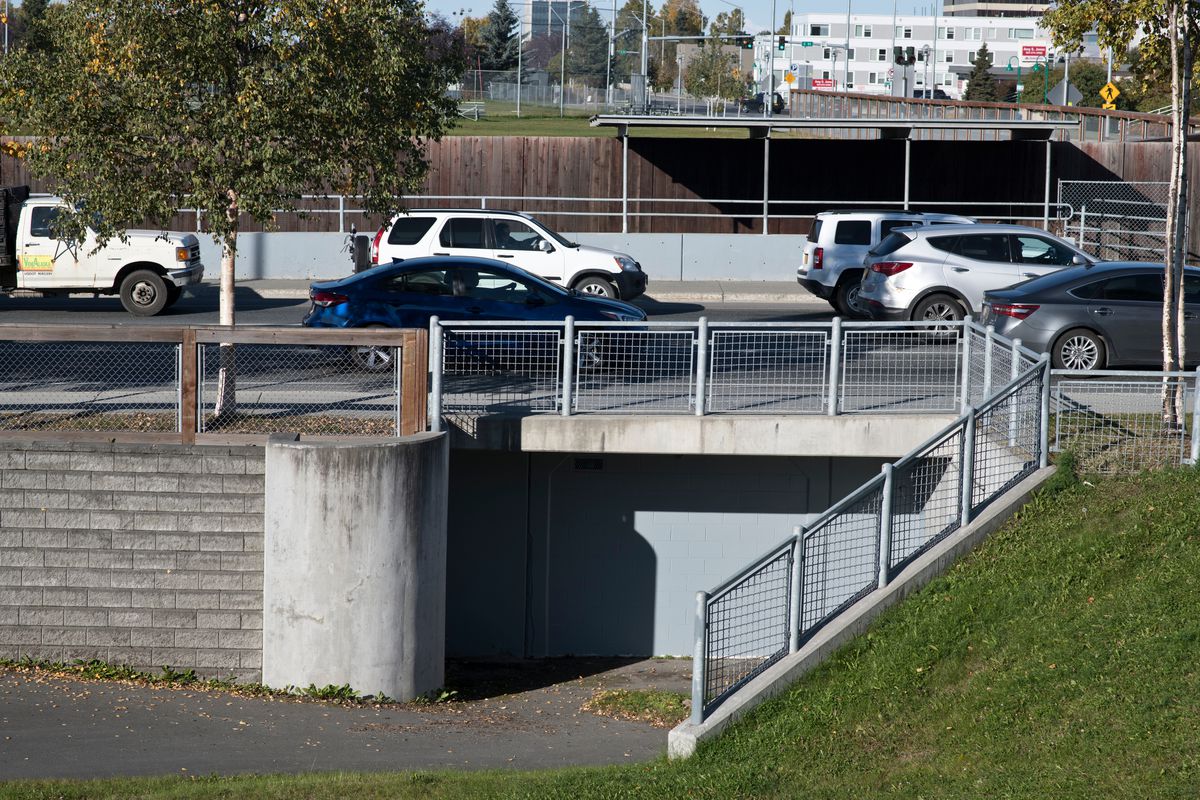 The east entrance to a tunnel under A Street is walled off on the Denali Elementary School grounds. Anchorage Police removed a homeless camp from a pedestrian tunnel under A Street near 9th Avenue on Sept. 13, 2018. Officials said an 19-year-old man from Valdez had been staying there. (Marc Lester / ADN)

The east entrance to a tunnel under A Street is walled off on the Denali Elementary School grounds. Anchorage Police removed a homeless camp from a pedestrian tunnel under A Street near 9th Avenue on Sept. 13, 2018. Officials said an 19-year-old man from Valdez had been staying there. (Marc Lester / ADN)

A 19-year-old snuck into an abandoned tunnel near an elementary school in downtown Anchorage and set up a tidy makeshift apartment, complete with a table and chairs, a mattress and a black cat, officials said.

City officials discovered the dwelling Thursday after a pedestrian walking nearby complained about odors and trash. By Friday morning, the place had been cleaned out and locked up.

A photograph taken by downtown Assemblyman Christopher Constant showed coats hanging from bungee cords strung to the ceiling, a mattress with sheets, food sitting on a red table on a rug with chairs and other odds and ends.

"It was basically like an apartment there," said city homeless coordinator Nancy Burke, who also saw photographs.

The young man had cut the lock on the tunnel entrance and replaced it with his own, said Sally Jones, an officer with the Anchorage Police Department's Community Action Policing Team.

The city had to call a locksmith to cut the tunnel open, Jones said.

The man's location wasn't known Friday morning. He was not being publicly identified by city officials: He had not been charged with a crime, and Burke said the city does not name people contacted through homeless outreach efforts. Constant said he had come from Valdez, which officials confirmed.

When Jones, the police officer, showed up Thursday, the 19-year-old had packed up most of his stuff. Because of his age, Jones suggested he could go to Covenant House, the downtown Anchorage shelter for homeless youth.

The man said that he was no longer welcome at Covenant House, according to Jones. He told Jones he'd applied for a job at McDonald's and was waiting for his Permanent Fund Dividend.

Jones directed him to the team of social workers that has been canvassing Anchorage's homeless camps. She also told him to go to Brother Francis Shelter, the emergency shelter for homeless adults. She isn't sure he did.

She said the system isn't working: There aren't enough places for people to go.

"I wish we could get these people off the street when they're fresh," Jones said.

The social worker team is in touch with the man via cellphone, Burke said. She said they would be looking at options, including ways for him to re-enter Covenant House.

City parks and recreation crews discovered the tunnel shelter after Tom McGrath, a retired business owner who has long been active in local community councils, reported bad smells and a pile-up of trash near the tunnel. McGrath, who lives nearby, said he'd walked past it several times in recent weeks.

The tunnel was built several decades ago as a way for students at Denali Elementary to ski to the adjacent Park Strip across A Street, said Josh Durand, the parks superintendent. But it's been closed and locked for many years, he said.

Durand said the city parks department had no reason to suspect anyone was down there because it was locked.

McGrath suggested the tunnel be filled in. Durand said the tunnel runs under a state road and it wasn't immediately clear who was responsible for it. He said there would be future conversations about what should happen next.

But the makeshift tunnel apartment is yet another sign the city needed to maintain a focus on finding housing and cleaning up parks and trails, said Constant, the downtown assemblyman.

Constant also said it was also a testament to survival skills and potential.

"I've got a lot of hope for this kid. If he can put some of this determination into (his future)…man, he's going places," Constant said.

As for the black cat: Animal control officers came to pick it up, Durand said, but the man returned at the same time and kept it.