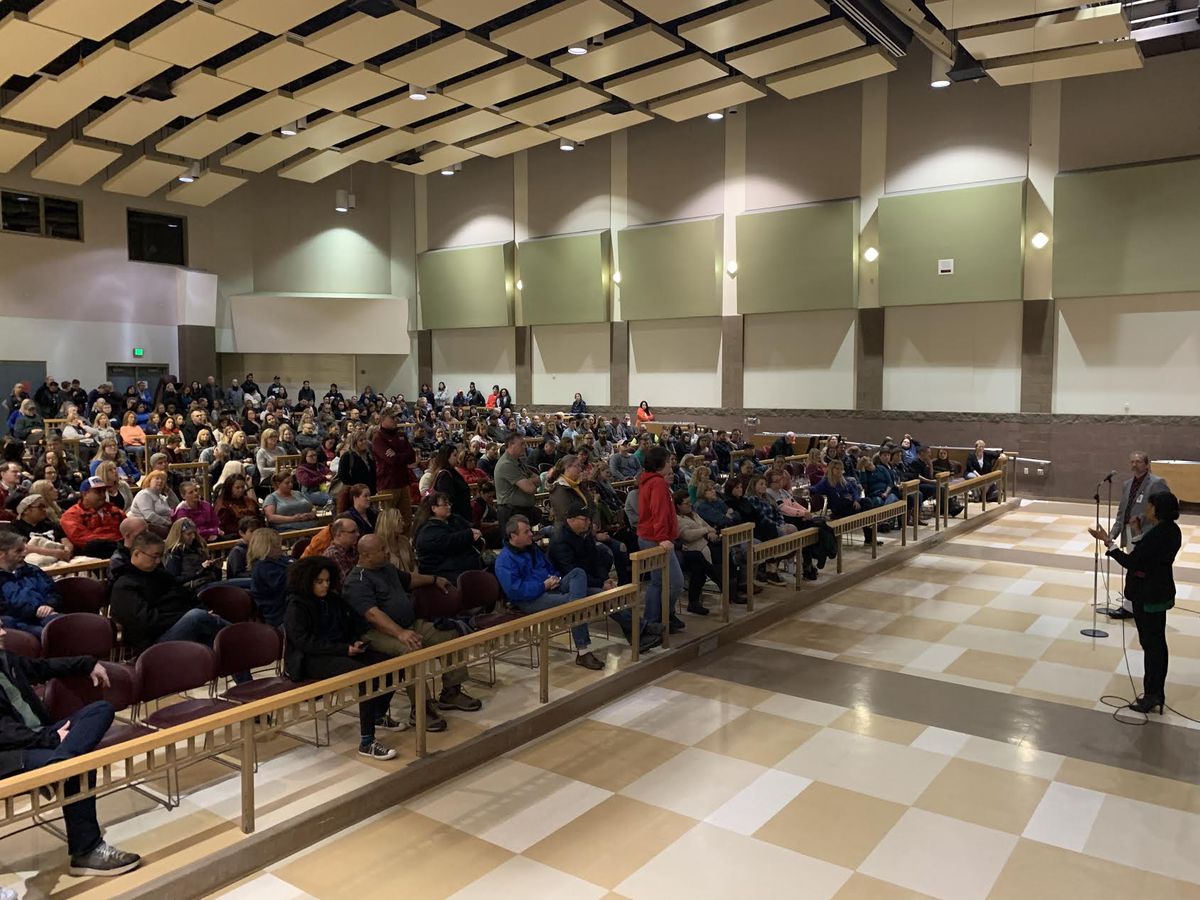 Hundreds of people gathered at Dimond High School on Monday evening for a meeting about written threats found in the school last week.

For nearly three hours, parents lined up to ask an Anchorage School District administrator and the school principal about the threats, school safety, communication plans and more. Many also criticized the way the district and the school handled the threats.

Some parents said they were left without information Friday morning as additional police vehicles remained parked outside of Dimond High. Some said they got calls or text messages from worried children who were held in their first classes.

Parents at Monday's meeting called for better communication from district and school officials. Some called for added safety measures.

"We're just a little afraid of what's going on," another parent said.

Four threats were found in Dimond bathrooms last week, district officials said. One read, "I'm shooting up the school, I'm not joking. I have a gun in my lock," according to an email last week from Dimond Principal Tina Johnson-Harris to parents.

There was an added police presence at Dimond on Friday. Classes weren't canceled, but hundreds of students left school.

Monday's meeting was an effort to ease parents' concerns about their children returning to school on Tuesday, Johnson-Harris said. Students across the district had Monday off in observance of Veterans Day.

Michael Graham, district chief academic officer, and Johnson-Harris said Monday they hadn't known just how many additional police officers would arrive at the school Friday morning. Graham said he had expected a couple more school resource officers to help with the investigation.

"Had we known there were going to be 11 patrol cars out there, you would have been told that," Graham told parents.

Administration and staff take safety seriously, Johnson-Harris said. She said the presence of additional officers on Friday was "an attempt to show a heightened sense of awareness." It did, however, inadvertently create "undue anxiety and ultimately fear" among students, she said.

"It is my regret and sincere apology that this occurred," she told parents. "I certainly did not want there to be a mass exit of students and fear in students because of what they did not know."

By fifth period, about two-thirds of students had requested a pass to leave school or left with no notice, Johnson-Harris said. About 1,520 students are enrolled at Dimond High.

Kendra Doshier, a police spokeswoman, said in an emailed statement Monday that the police investigation continued.

"We cannot stress enough how seriously the department takes threats of any kind. Safety is our number one priority," Doshier said in the statement. "We want to assure the community that we continue to thoroughly investigate this incident in cooperation with the Anchorage School District and will ensure that those responsible are held accountable."

Some parents said Monday they were upset and concerned that Bishop and an Anchorage Police Department representative weren't at the meeting.

Graham said he volunteered to attend the meeting because he had been working with Johnson-Harris. He also read a statement from Doshier during the meeting.

There will continue to be limited hall passes and limited access to upstairs bathrooms at Dimond High on Tuesday as the police investigation continues, Johnson-Harris said. There will also be more school resource officers.

Generally, Dimond High has two officers Tuesday through Thursday and one on Monday and Friday, Johnson-Harris said. This Tuesday, the school will have four officers, she said, and it will have two the rest of the week.

In response to parents' requests at Monday's meeting, she said students' backpacks and lockers will also be searched Tuesday morning.

"When they come tomorrow, their backpacks will be searched," Johnson-Harris told the parents. "I don't have a problem doing that."

Graham said he was sure many parents were wondering Monday: How can you guarantee the safety of our children?

"In this day and age, no school, no movie theater, no shopping mall, no church, no synagogue, can guarantee you 100 percent that your kid's going to be safe," Graham told parents. "Can't do it. But we can tell you that we put every single thing in place that we can to ensure it, because there's nothing more important to educators. We know you're sending us your babies."

Dimond High parent Amber Arias said in an interview Monday that she felt communication from the district was reactionary instead of proactive.

"All it is is them saying, 'We're sorry. This is why this happened,' " she said. "Correcting the rumors."

Arias said her son is also on the Dimond High football team. She said communication seemed the same as during an incident in August, which she learned about through news reports.

"I don't have a lot of faith in the fact that anything better is going to be done regarding communication," Arias said during Monday's meeting.

Three Dimond High School football coaches, including the head coach, were fired and students were disciplined in August in the wake of allegations of what Bishop called "serious inappropriate behavior" during a team trip to Fairbanks. Anchorage police sent the case to state prosecutors in September.

Arias said she hadn't yet decided Monday evening whether to send her son to school Tuesday.

"I honestly feel like he's going to be fine, but it's just, it's kind of nerve-wracking," she said.