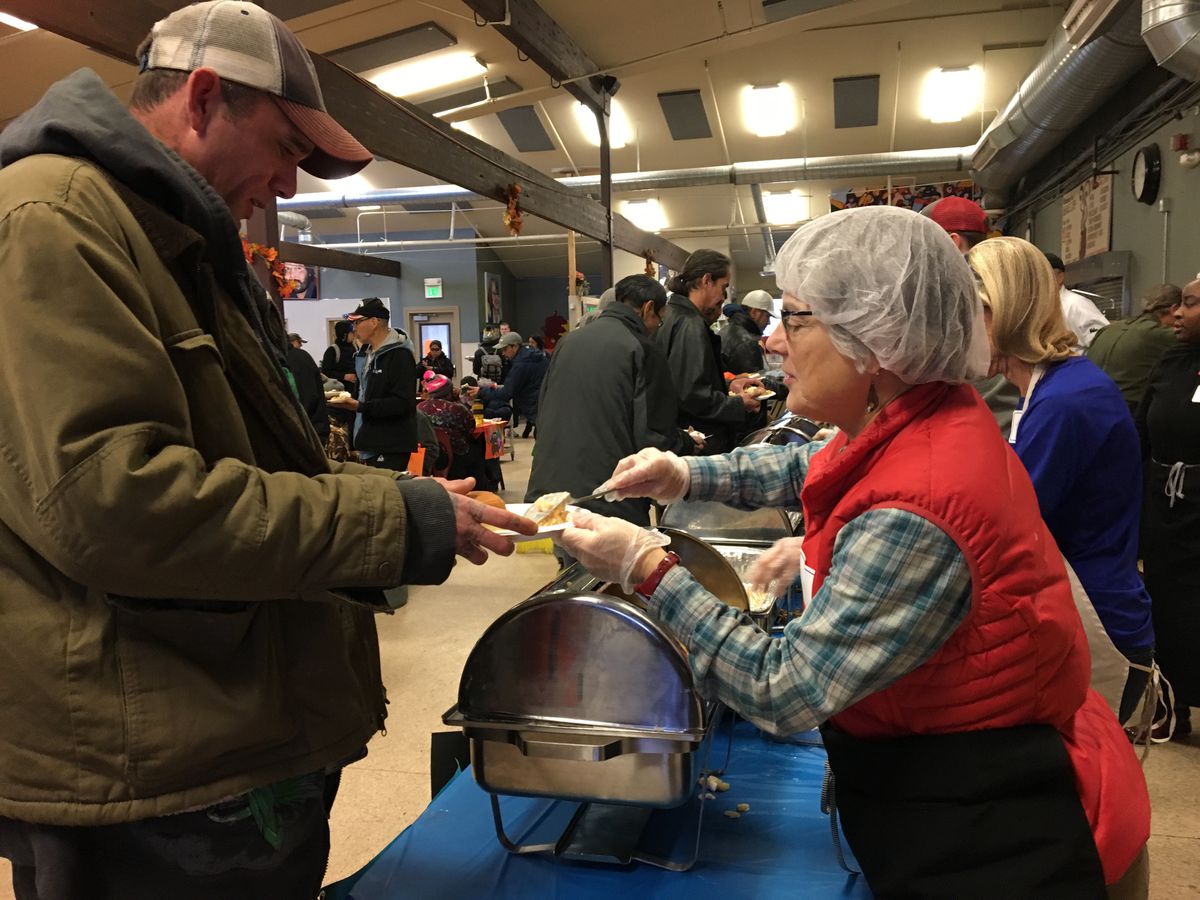 A volunteer fills a diner's plate with a generous serving of fruit salad on Thanksgiving Day at Bean's Cafe. (Madeline McGee / ADN)

A volunteer fills a diner's plate with a generous serving of fruit salad on Thanksgiving Day at Bean's Cafe. (Madeline McGee / ADN)

Thanksgiving Day in Anchorage is typically quiet. Roads are empty, businesses are shuttered and the air is muted, but inside Bean’s Cafe, the scene is very different.

The downtown-area soup kitchen’s main dining room was packed to the walls Thursday afternoon as members of Anchorage’s homeless community lined up to have their plates filled with turkey, mashed potatoes and other traditional fixings. It was a close-quarter, bustling affair filled with live music and laughter, and by the end of the day, more than a thousand meals had been served, Bean’s executive director Lisa Sauder said.

“We want to make sure that everyone gets seconds and nobody goes away hungry,” Sauder said.

But the thing Sauder is most proud of? Everything that made the day possible was provided by the community. The kitchen was receiving food donations as late as Thursday morning, some totaling hundreds of pounds, she said. They received so much, in fact, that they can stock the kitchen’s pantries and freezers even after the Thanksgiving festivities are over — which is no small feat, since the kitchen is open 365 days a year and can serve up to 500 people on a busy day.

“It really, truly is a community meal,” she said.

The food wasn’t the only thing freely given. Throughout the course of the day, a rotating army of more than a hundred volunteers was busy at work preparing food, serving those who came in to eat, busing tables and even performing live music for clients, who submitted song requests.

One of those volunteers was Kurt Haider, an Anchorage radio personality whose nametag wryly identified him as “assistant to the regional manager,” a reference to the NBC sitcom “The Office.”

“More often than not, they have smiles on their faces,” Haider said of the kitchen’s clients. “That in itself is pretty gratifying. I mean, isn’t that what volunteering is all about?”

Some volunteers, like Emerick Higdon, once sat at the same long dining tables now occupied by the kitchen’s current patrons. Higdon, who operates heavy equipment for a living, first came to Bean’s Cafe for help several years ago when he was struggling with alcoholism. He said he’s been working in the kitchen nearly every day for at least the past four years. Client volunteers like Higdon do the bulk of the kitchen’s day-to-day preparation and cleanup work, Sauder said.

Higdon said he tries to act as a mentor and encourage the soup kitchen’s patrons, many of whom also stay in the Brother Francis night shelter next door. His efforts don’t always work, but he said he isn’t discouraged.