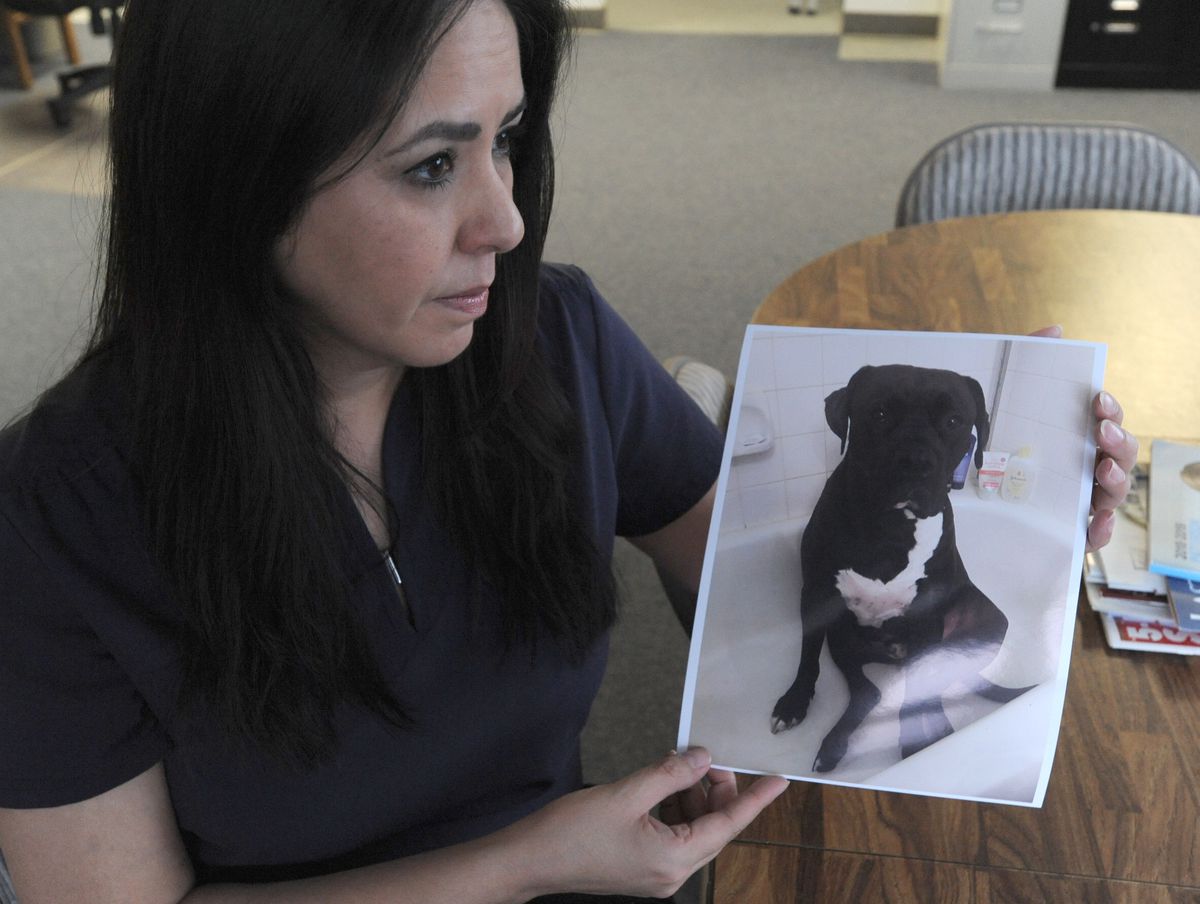 Rosemary Tower holds a photograph of her dog Zeus. Zeus has been missing since he took off after the earthquake, Nov. 30, 2018. She and husband Sean have posted signs, talked to neighbors, worked social media and still have no sightings of their dog. Photographed Dec. 6, 2018. (Anne Raup / ADN)

Rosemary Tower holds a photograph of her dog Zeus. Zeus has been missing since he took off after the earthquake, Nov. 30, 2018. She and husband Sean have posted signs, talked to neighbors, worked social media and still have no sightings of their dog. Photographed Dec. 6, 2018. (Anne Raup / ADN)

PALMER -- Animals across Southcentral Alaska spooked and fled at the clamor and violent shaking of the magnitude 7.0 earthquake Nov. 30.

Wasilla residents Sean and Rosemary Tower still haven’t found Zeus, their 9-year-old, 113-pound “big baby” of a black pit bull who fled through an open door as the Towers tried to make sure the family was safe during the quake.

Sean Tower followed the dog’s trail to nearby Cottonwood Lake and a road. He put up posters and notices on Facebook. The couple makes regular checks with the Mat-Su animal shelter. They worry shifting lake ice swallowed the big dog up.

Tower said he hopes somebody found Zeus and just hasn’t reported it. The family is offering a reward.

A number of other quake-spooked dogs remain missing, according to social media posts. Rescuers say more cats than dogs haven’t turned up.

They also say not to lose hope: It can take months for cats to come home.

‘It was out of control’

The quake’s epicenter was on Point MacKenzie, north across Knik Arm from Joint Base Elmendorf-Richardson. It started just before 8:30 a.m. Nov. 30 and left a trail of damaged schools, buildings and roads that could take months to repair.

Normally, the pet-scaring racket of New Year’s Eve and the Fourth of July are the worst days for reports of missing pets, says Anchorage volunteer pet recovery specialist Cynthia White.

“Honestly, the two put together have nothing on this earthquake,” White said. “It was out of control and we felt like we could barely keep up.”

She helps administer several Facebook lost-and-found pet groups, with the help of a friend.

“I have templates where I cut and paste,” White said. “For three hours, I did nothing but cut and paste tips. It was insane. So many cats. Lots of dogs.”

Many dog owners found their quake-scattered canines in the hours and days after, rescuers say. Some cats are turning up in the strangest places: cabinets, behind the fridge, under furniture. Someone who lost their huge cat at a Spenard hotel before the quake actually found it in the days after: The animal had somehow remained hidden in the room and turned up between the wall and the bed.

Amy Dalton’s border collie mix Freya darted out an open door not long after the quake. Dalton got her back the same day: Somebody spotted her four or five miles from the house.

“It jarred her from her sleep,” she said. “She just started trembling. She was back on that eyes-open, ears-perked, knowing that was what she felt last time this very scary event took place."

White notes that sometimes missing cats don’t turn up for months under non-disaster circumstances. Sometimes they’re even still in the house, wedged in sofa cushions or hiding in the closet.

She advises owners to be consistent and stick with strategies like putting small amounts of food at feeding stations; using live traps; establishing scent stations near the house with clothes that smell like the owner or pungent food items like liquid smoke smeared on a branch; making use of social media; reporting to animal control; and distributing posters.

“Just because you haven’t seen your pet doesn’t mean it’s not out there,” she said. "It’s hiding to stay safe.”

Anchorage Animal Care and Control has a “Lost Pets” link with search tips.

The two spent the day of the quake together, Hemphill said. He took Mac to work at Covenant House. Then he took the dog home to his condo at 13th Avenue and A Street and put him in a bedroom. He closed the door and left to meet friends.

Five days passed. Thursday morning, he got a message: A woman at Third Avenue and Cordova Street had Mac. Her brother had found him. She didn’t want to bring him to the animal shelter in case he fell into the wrong hands. The little dog was capturing her heart.

Then the woman’s sister saw Mac’s photos on social media and called her late Wednesday night: The little dog already had a loving home.

Hemphill said he spent an hour with the woman when he picked up his dog.

“We made a commitment to adopt her as Mac’s grandma and take him to spend time with her at least once a week,” he said.

Even birds eat to feel better

When the quake struck, some animals couldn’t flee even if they wanted to. Zookeepers, wildlife center workers and animal-control employees got to see firsthand how their confined charges reacted.

Laura Atwood could see a cat inside its kennel the morning of the earthquake. The Anchorage animal care spokeswoman watched as the terrified feline responded to the seismic jolts.

“The poor thing was just all over her kennel. Top to bottom, side to side,” Atwood said this week. “When it stopped shaking, she was just clinging to the top.”

Shelter staffers found no injured animals or damage, she said. Kennel technicians left the freaked-out cats alone for a while.

At the Alaska Zoo, the otters “just were very sleepy,” said deputy curator Christin Groth. “We can only assume they were stress-sleeping.”

Well, the birds were stress-eating.

A rescued beaver stopped eating altogether for a few days. But the camels and alpacas just kept chewing hay throughout the quake.

The zoo’s female snow leopard, Malala, bolted from her enclosure as soon as she ate, as if she blamed it for the shaking.

The moose at the Alaska Wildlife Conservation Center in Portage did the same thing.

“Moose ran out of their shelter and stood outside looking in,” development director Trish Baker said in an email. “It appeared they thought their shelter was the cause of the disruption.”

But the musk oxen apparently figured they’d fend off the quake: “Musk ox assumed their protective stance by standing in a circle and looking outward."