For those who lived through Alaska’s Good Friday earthquake in 1964, last Friday was different 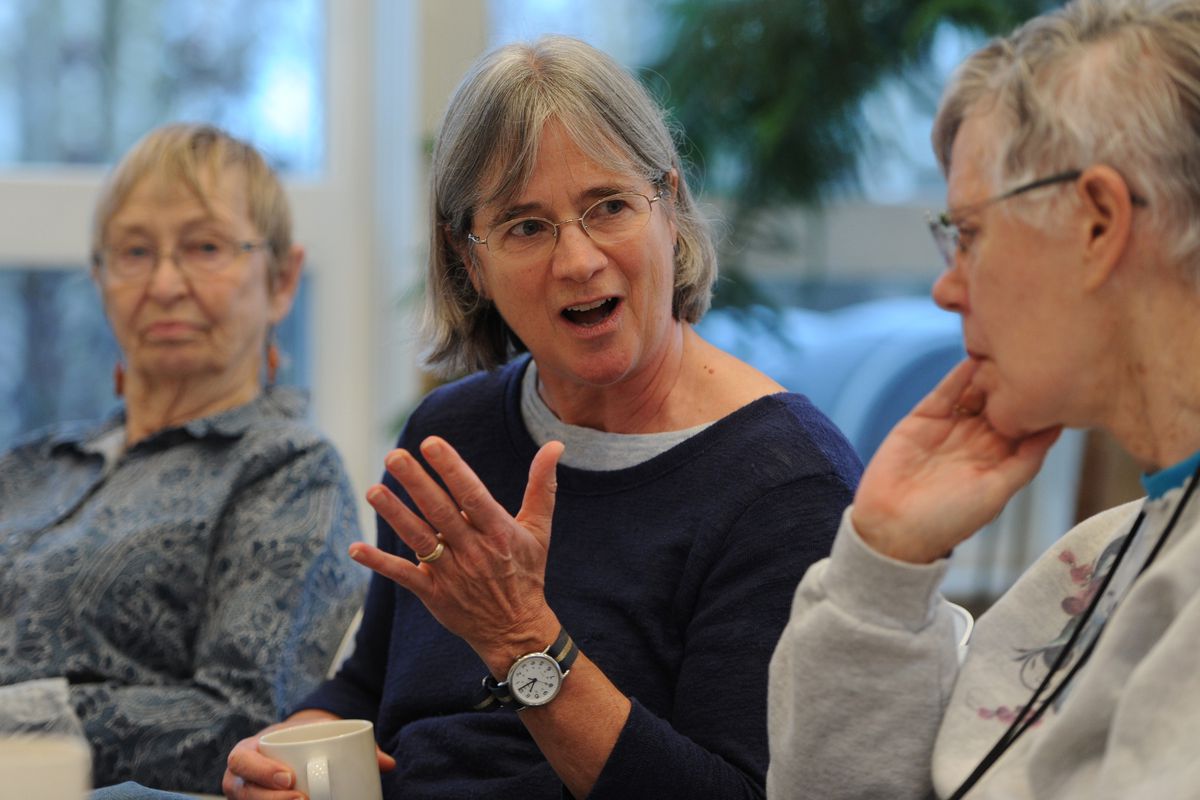 Anne Thomas Donaghy, who lived on Chilligan Drive in the Turnagain Heights subdivision of Anchorage, shared what she experienced during the 1964 Good Friday earthquake with residents gathered around a table at the Thomas Center on Dec. 5, 2018. JoAnn Banta, left, was in Cordova during the 1964 earthquake, and Judy Thompson, right, moved to Alaska the year after the quake. (Bill Roth / ADN)

Anne Thomas Donaghy, who lived on Chilligan Drive in the Turnagain Heights subdivision of Anchorage, shared what she experienced during the 1964 Good Friday earthquake with residents gathered around a table at the Thomas Center on Dec. 5, 2018. JoAnn Banta, left, was in Cordova during the 1964 earthquake, and Judy Thompson, right, moved to Alaska the year after the quake. (Bill Roth / ADN)

“I just went to the bad place,” she said. “I was terrified.”

She had reason to be more disturbed than most.

On March 27, 1964 Donaghy was eight years old and living on Chilligan Drive in the Turnagain neighborhood.

As the quake began, she and her mother and brother ran out of their house, which split in two. The clay soil liquefied, her mother clutching her as they rode a slow-moving landslide of frozen ground toward Cook Inlet.

A crevasse opened and swallowed the two little boys who lived next door, closing behind them. Their bodies have never been found.

[Related: March 27, 1964: The day the earth fell to pieces for one Anchorage family]

A few months later, her mother, Tay Thomas, wrote a detailed account of the family’s ordeal for National Geographic magazine.

Donaghy’s moment of terror clinging to shards of earth upended by the quake was immortalized in a painting the magazine commissioned to run with the article.

The moment was a pivotal, life-changing event for the family. Their house destroyed, they moved to a new neighborhood. Donaghy says she has never been back to Chilligan Drive.

For people who lived through the Good Friday earthquake, Friday’s quake was different.

[All our coverage of the 7.0 Alaska earthquake and aftermath]

For some like Donaghy, it triggered visceral memories of terror that have never quite softened in the decades since.

“When things got really rocking on Friday, when things started falling off the shelves and pictures were smashing, something inside me said, Oh my god, it’s happening again,” she said.

For 54 years, she realized, she’d been harboring a deep dread that the catastrophe of 1964 could repeat itself at any moment.

“With an earthquake, you never know,” Donaghy said. “You don’t know when it’s coming and how long it’s going to last. That’s a terrible fear.”

At least, Donaghy said, she was not alone.

She rents an apartment at the Thomas Center for Senior Leadership, where a collection of former Bush doctors, school teachers, geologists, homemakers and assorted other older Alaskans live together in a light-filled apartment building with a common room, kitchen and garden on the campus of St. Mary’s Episcopal Church, off Tudor Road and Lake Otis Parkway.

The center is named after Donaghy’s late parents Tay and Lowell Thomas Jr., who endowed the project.

Donaghy was surrounded by a higher-than-average concentration of people who could understand some of her fear: Nine of the 17 residents of the Thomas Center lived in Alaska during the 1964 earthquake.

Some are in their 90s now, but the day Anchorage shook and broke apart remains vivid for each one of them.

There was Alex Pinkham, who’d been resting up for a midnight shift as an ambulance driver at the old Native Hospital on Third Avenue during the quake and remembers tumbling out of his bed.

Monte Weaver was a young geologist working for the state transportation department. He remembers making his way home to Bootlegger’s Cove through the wreckage of Fourth Avenue on foot because the roads were broken and driving was no longer an option.

As he passed by the remains of one bar, he saw two men crawl out of the rubble, obviously soused.

“I’ll never forget,” he said. “One guy said, ‘We’ve got to get the hell out of this town.’ And the other guy said, ‘Yeah, I never liked it anyway.”

Joann Banta was a Cordova school teacher. She remembers just how loud the earthquake was, the sound of ice shattering. She also remembers survivors from the devastated village of Chenega, where 26 people were killed by a massive tsunami generated by the earthquake, taking refuge in the Cordova schoolhouse.

Nancy Sydnam would go on to be a renowned doctor serving the Aleutian Islands, but on that day in 1964 she was just a young divorced mother who remembers being home alone with her young children as the ground rolled and bucked, trying to calm her hunting dogs.

Chaplain Judith Lethin remembered being a young newlywed in an Airstream trailer in Anchorage. She returned from a neighbor’s house to find everything broken but the Tupperware.

On Friday, just about everybody was still in their apartment at 8:29 a.m., when the quake began. Afterward, a few residents were stuck inside their units because door frames had shifted, making the doors impossible to open, said Lethin.

When they finally got the doors open, everyone gathered in the light-filled common room.

“We all came down and made coffee, we pulled everything edible out of the refrigerator, and we got together and we ate,” said Lethin. “And we just talked, and we normalized it.”

Soon people were arriving to help clean up broken wine bottles and smashed picture frames. They’re still talking, six days later. Some are still jumpy, Donaghy said. But they’re also proud of how resilient Anchorage has been, in 1964 and today.