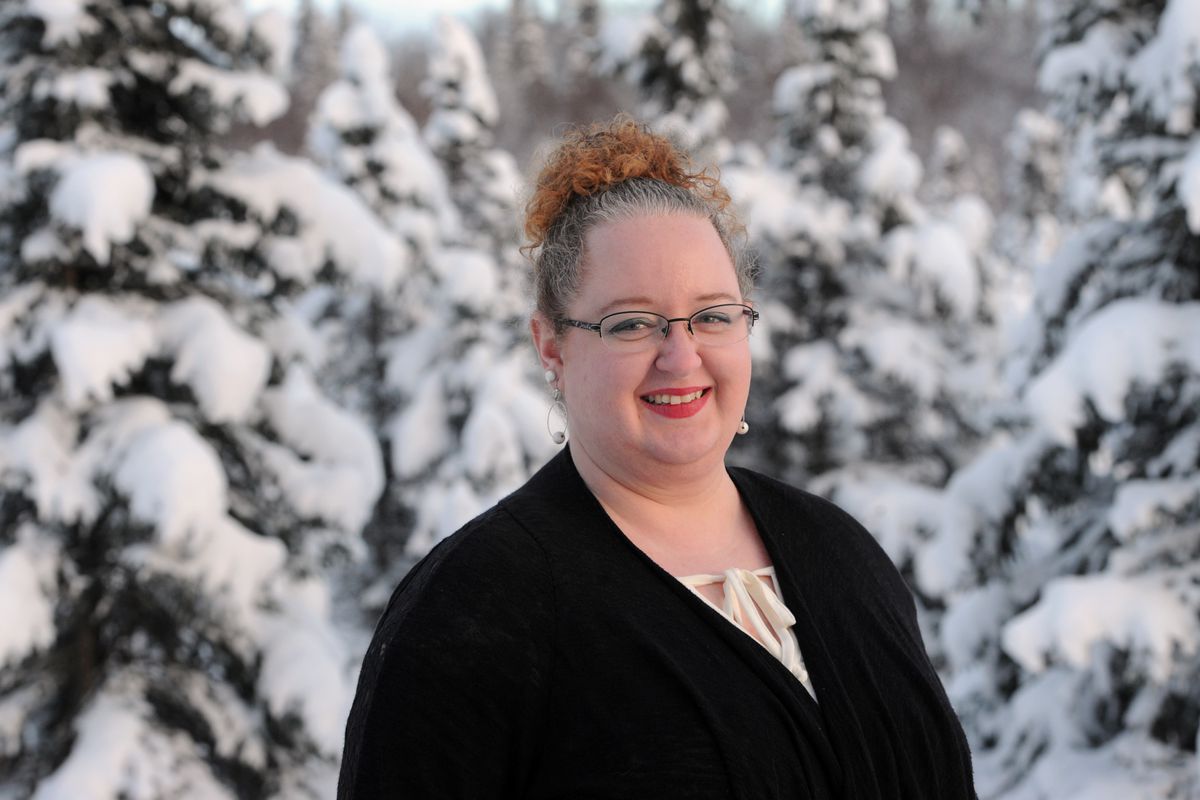 Katherine Irwin, who is graduating with a bachelors degree in journalism and public communications with a minor in art, will be the first deaf student commencement speaker at UAA during the commencement ceremony at the Alaska Airlines Center on Sunday. (Bill Roth / ADN)

Katherine Irwin, who is graduating with a bachelors degree in journalism and public communications with a minor in art, will be the first deaf student commencement speaker at UAA during the commencement ceremony at the Alaska Airlines Center on Sunday. (Bill Roth / ADN)

In some ways, all of Katherine Irwin’s life experiences have built up to Sunday: to getting her college diploma from the University of Alaska Anchorage, to standing in front of nearly 1,000 of her fellow graduates, to delivering the student commencement speech in American Sign Language.

“All my experiences in my whole life have led up to this moment … to be able to face this and handle this and go to college, take classes and advocate for myself,” Irwin said in sign language during a recent interview at UAA, translated by an interpreter.

“If I were born able to hear,” she said. “I don’t think I would be the same person that I am today.”

Irwin, 37, is one of nearly 1,000 students graduating from UAA on Sunday. She’s UAA’s first student commencement speaker who is deaf, and that makes her proud. She wants to show others who are deaf: You can go to college. You can get your degree. She wants show those who can hear: We’re equals. “I’m not less than.”

“For people who are hearing, I want them to see that I’m not below them,” Irwin said. “I’m just like you, I just can’t hear.”

Irwin will graduate from UAA with a bachelor’s degree in journalism and public communications, plus a minor in art and as a member of the Delta Alpha Pi International Honor Society. She’d like to work in a university setting after graduation, either eventually as a professor or with disability support services. She also wants to write a book.

But like she’ll tell the new graduates Sunday: It’s one day at a time.

‘Passionate about what she does’

Irwin describes herself as curious and introverted, but not shy. She was born deaf. Sign language is her first language. She identifies as Deaf, with a capital D, she said.

“I am culturally Deaf and I use sign language, and therefore I’m involved in this minority community,” she said. “So we use a capital-D Deaf to describe ourselves as a cohesive, language minority group.”

Irwin is one of four deaf students at UAA who use sign language interpreters, according to the university’s Disability Support Services. It’s a tiny slice of the roughly 17,000 students enrolled there.

Irwin started classes at UAA in fall 2014. She had moved to Alaska from Colorado with her then-husband and young son about six years earlier.

She had taken some college classes before, but hadn’t gotten the degree she always wanted, both for herself and her son, Dominic, who’s now 14, she said. So she decided to just go for it. She quit her job as a teaching assistant at an Anchorage elementary school and enrolled full time at UAA.

“I was nervous, but after a couple of days, everything just fell right into place and it just felt so natural to be here,” she said. “I think it’s scarier to leave school than to enter school. I’ve come to find this place like a second home.”

Her love of writing propelled her to pursue journalism. Irwin’s professors described her as a determined and passionate student. She’s an advocate and a high achiever.

“She’s looking for ways to empower the deaf community, and I think in many ways, she’s already done that,” said Joy Chavez Mapaye, an associate processor in UAA’s Department of Journalism and Communication. “She’s passionate about what she does.”

As a student, Irwin has focused some of her research on how to improve services for UAA students with disabilities. She surveyed hundreds of students, staff and faculty about the effectiveness of the university’s Disability Support Services, where she also worked.

Irwin came up with ideas for improvement, such as video trainings for UAA faculty about tasks such as how to set up closed captioning.

‘You couldn’t slow her down’

It’s not necessarily surprising to Irwin’s mom that her daughter was selected as the student commencement speaker.

Katherine Irwin has thrown herself at new experiences since she was a child, said her mom, Helen Irwin. She grew up in Arizona and Colorado. She’s always been independent, strong and smart, Helen Irwin said about her daughter.

“We didn’t even know she was deaf until she was 20 months old because she got her needs met her own way,” Helen Irwin said.

As a child, Katherine Irwin learned sign language. She excelled in school. She finished high school in three years and was valedictorian of her class at the Colorado School for the Deaf and the Blind. She spoke at both her middle school and high school graduations, said her mom.

Helen Irwin recounted other memories of her daughter, too, like the time a teenage Katherine Irwin was a cast member in the movie, “Blue Rodeo." Or as a cashier at Target, when she put up a note that said: I’m deaf, just look right at me, I can read your lips.

“You couldn’t slow her down,” Helen Irwin said. “She puts 110 percent in everything she does.”

On Sunday, Katherine Irwin’s mom, son, ex-husband and friends will watch from the audience as she gets her diploma and addresses her fellow graduates, giving them that piece of advice she’s focused on for years: Take one day at a time.

UAA’s graduation ceremony is at 1 p.m. Sunday at the Alaska Airlines Center. Doors open at 11:30 a.m.