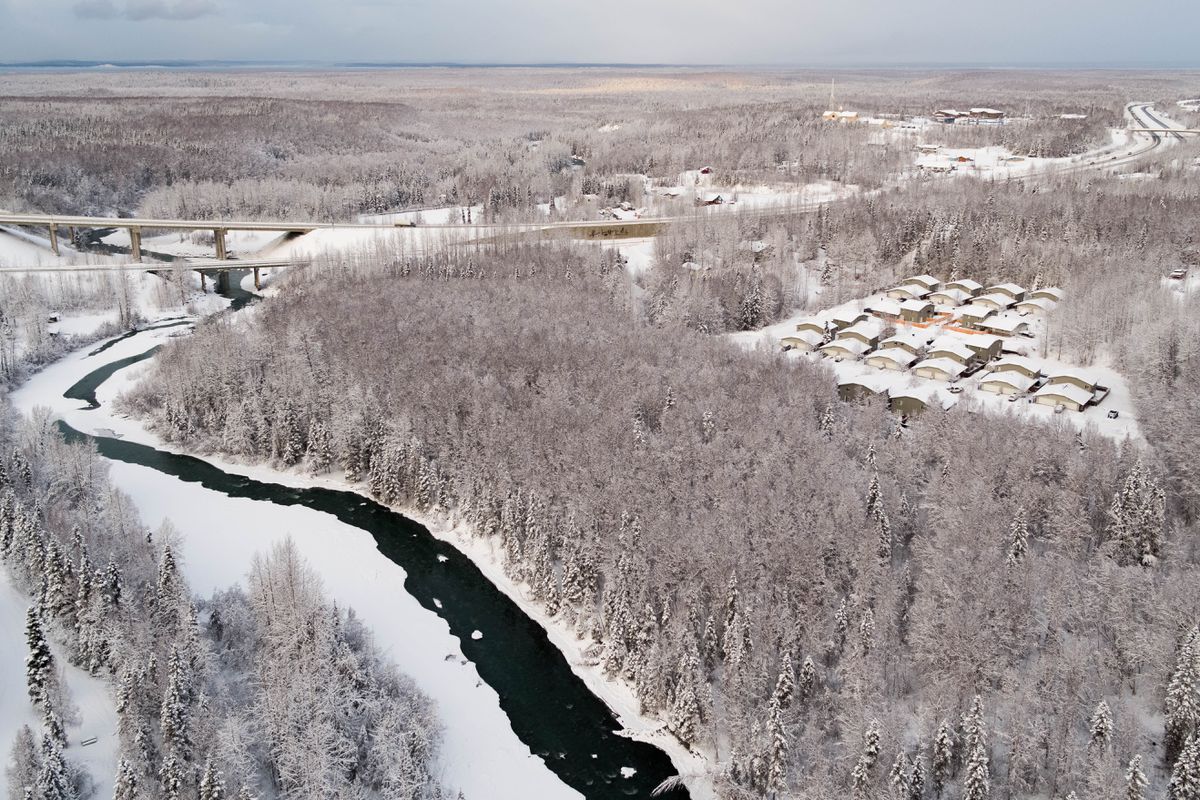 The Rivers Edge Condominiums are seen next to Eagle River on Thursday, Dec. 13, 2018. Eight homes in the development were red-tagged by the municipality due to structural damage that occurred when part of a slope slid into the homes during the Nov. 30 magnitude 7.0 earthquake. (Loren Holmes / ADN)

The Rivers Edge Condominiums are seen next to Eagle River on Thursday, Dec. 13, 2018. Eight homes in the development were red-tagged by the municipality due to structural damage that occurred when part of a slope slid into the homes during the Nov. 30 magnitude 7.0 earthquake. (Loren Holmes / ADN)

Eight red signs were attached to eight garage doors in a quiet cluster of duplex condominiums at the bottom of the Eagle River Valley shortly after a magnitude 7.0 earthquake on Nov. 30.

“UNSAFE,” read each of the eight cards, placed on the homes by Municipality of Anchorage building inspectors. “DO NOT ENTER OR OCCUPY.”

Many Southcentral residents have moved on after the earthquake, but in this pocket of severe damage, one of the worst in the municipality, residents are still trying to figure out the next step. The homes, at the north edge of the Rivers Edge subdivision, stand out as the most tightly clustered group of red dots on a map of earthquake damage in Eagle River. Residents living nearest to a steep slope at the north end of the development have been displaced, those living further from the unstable ground fear for their safety in future seismic events and all are grappling with how they’ll collectively pay to fix the mess.

Nobody can say why the neighborhood was so badly damaged. Experts say that assessment will take months; soils, building codes and earthquake strength are all being looked at by scientists and engineers. But with eight red-tagged homes (and two other condos yellow-tagged) in their neighborhood, Rivers Edge residents are questioning whether the area was safe to build on in the first place.

“Will there be some assessment of the areas where the ground and earth has been weakened by this earthquake to recommend either not rebuilding or possibly turning some into areas where there should be no rebuilding at all?” one resident asked U.S. Sen. Lisa Murkowski during a public meeting on earthquake damage last week at an Eagle River coffee shop.

Neighborhood residents have been reluctant to talk publicly about the situation, but two women who identified themselves as Rivers Edge residents spoke up during the community meeting. Both said the feeling of unease is palpable in the housing development.

“That hill appears to be liquid to me,” one said of the cracked slope at the north end of the development. “And it’s just a matter of time — a month? A year? I’m not sure — but it does not appear to be safe.”

Although the woman’s home isn’t one of the condos nearest to the hillside, she said, she still worries about what could happen if the earth gives way completely.

“I don’t feel safe there,” she said. “My unit’s livable, but every time I feel shaking, I’m shaking because it’s like, when is that hill coming down on me?”

The disaster has displaced several residents who are retirees on fixed incomes. Of the eight homes that are red-tagged, two receive veterans' property tax exemptions and another has a senior exemption. That group includes people like Ed and Holly McClure, a retired couple forced to move in with their daughter, Mallory Valentine, after their home, which had an assessed value of $231,600 before the quake, was rendered unlivable.

Ed McClure has multiple sclerosis, which requires him to use a wheelchair — something for which his daughter’s home isn’t equipped.

“Not without severe renovation,” she said.

Repairs could run into the millions, a bill Valentine said her parents will have to share with the other residents of the 42-member condo association. She’s worried the expense — whether it comes in the form of a one-time payment or increased condo dues — will force her parents and other neighborhood residents out of their homes.

“None of these people are going to be able to sell their homes or pay their dues,” said Valentine, who speculated some residents may have to rent their condos out in order to pay their mortgages.

Many of the people living in the homes are retired or experience physical challenges, said Valentine, who became emotional as she gave a brief tour of her parents’ home last week. Standing in front of her father’s now unused stair-lift chair, Valentine said the earthquake will have long-term, significant impacts on dozens of condo residents.

“My dad’s not the only person in a wheelchair in this back row,” she said.

At first glance, the identical 1,400 square foot homes appear to be fine. The only thing that seems amiss are the signs. In the space provided for building inspector comments on each are ominous notes.

Behind the McClure home, the back porch rests at an extreme angle as the earth itself appears to have kicked its way into the bottom of the home.

“It looked like what would happen if a wave hit a wall,” said the couple’s daughter Mallory Valentine.

The damage in the home’s crawlspace: long, deep cracks running through the foundation that give the impression the walls are caving in.

“Everybody that’s been down here hasn’t wanted to stay very long,” she said.

The thing neighbors worry about most: About 50 feet up the wooded slope behind the row of homes, a large crack cuts across the hillside parallel to the street, causing trees to slump slightly in the direction of the river bottom. At the least, the hillside will need some kind of retaining wall to hold it back.

[Post-quake structural damage isn’t so much a building problem as a ground problem, engineers say]

Kahlstrom said he’s only an inspector and not a geotechnical engineer. Still, he said what happened to the homes in Rivers Edge is plain to see.

“The slope stability on the north side of the units has been compromised and due to liquefaction the bearing capacity of the soil is questionable, at least on the north side where the foundation walls were impacted and in some cases causing them to buckle,” he said.

It’s entirely possible the homes could collapse from an aftershock or heavy snow load on the roof, he said.

Before people move back in, Kahlstrom said a geotechnical survey will be needed to determine how — or if — the hillside can be stabilized.

The condo association has begun that process. Valentine said she’s been informed the association has met with engineers and an attorney to determine what to do next. A team of researchers flew drones over the property to get a handle on the damage, though the team leader said he couldn’t share specific findings. Damage to the complex is widespread, with eight red-tagged units, two bearing yellow tags and many others with issues ranging from cracked drywall to flooded crawlspaces.

Bryan Fisher, Alaska Division of Homeland Security and Emergency Management operations chief, fielded the question, saying state and federal officials are still in the early stages of their research.

“The geotechnical engineers that are going to look at the ground stability, that will be coming, that’s a pretty substantial lift to do that scientific assessment,” Fisher said.

The question of whether or not to build in certain areas, however, he said is one that lies solely with the municipality and its leaders.

“The question to whether areas will be not recommended to be rebuilt in is something that, if you have concerns, I really strongly recommend you get ahold of your assembly member and express that concern to them,” he said.

Concerns about building codes in Eagle River have also been brought to the forefront since the quake, which revealed to many people for the first time the differences between Anchorage and Eagle River building rules. Because Chugiak-Eagle River is outside the municipality’s designated building safety zone, contractors here are not required to submit their plans to the municipality for inspection, nor must they have homes inspected by a municipal inspector. Essentially, contractors must follow the same building codes as Anchorage, but they’re allowed to choose who enforces them.

Kahlstrom said that sets up an unequal playing field in the municipality.

“We have to follow municipal code in Anchorage, that’s the difference,” said Kahlstrom, who stressed that he’s not qualified to render a verdict on what specifically went wrong in Rivers Edge and cannot comment on whether the homes were built improperly or in the wrong place.

Engineer Jake Horazdovsky, who also serves as president of the Chugiak Community Council, thinks the system is flawed.

“Whose interest is at heart?” he asked. “If it’s an MOA inspector, he’s interested in following the code.”

[Here’s why some structures fell in the Alaska earthquake and others didn’t, and how that came to be]

Horazdovsky hopes to push for Chugiak-Eagle River to be included in the safety area. But it’s an uphill fight, he said, in an area where people like to do things their own way.

“If I would have brought this up two months ago at the community council, they’d be like, ‘No way,’” he said.

Horazdovsky hopes the recent earthquake will call for stricter rules in his hometown.

“If they want change, they need to call their assembly member,” he said.

The red placards Kahlstrom placed on each of the eight homes represent the beginning of what could be a long-term nightmare for residents of the subdivision, which was built by Carl Disotell between 2001 and 2003 and “designed for retirees or others on a fixed income,” according to a story in an April 19, 2001 Alaska Star story about the development.

Some of those people may never return home now that massive earthquake damage has rendered their homes unsafe, and their family members are raising questions about whether the riverside development should have ever been built.

“It’s a marsh, and they have damage here that nobody else has,” said Valentine, whose parents, Ed and Holly McClure, bought their home on River Heights Loop in 2002.

The 2001 story noted concerns about drainage at the site, which sits just a couple hundred yards from the Eagle River and is cut through by at least one small stream. Those concerns were never fully addressed, said Valentine, who said every condo in the development that’s downslope from her parents’ has had flooding issues.

“Everyone lower than this back row has sump pumps,” she said.

The development has had issues with its septic system, repairs to which recently caused the condo association to levy a special $119-per-month assessment to be collected over the next two years. That’s in addition to the monthly dues of $370 per month, Valentine said.

A spokesperson for Snows Management, which manages the development, said no one from the company or its board of directors was authorized to talk to the media about the earthquake damage.

“The River’s Edge Board of Directors is meeting with experts to address earthquake damage and minimize impact to the owners,” the company wrote in response to a request for comment.

Builder Carl Disotell could not be reached for comment, nor could David R. Owens, the private inspector who approved the plans and inspected the foundations in 2001 and gave final approval in 2002.

Matt Tunseth is editor of the Alaska Star, which covers Chugiak and Eagle River. Email him at editor@alaskastar.com or call 907-257-4274.