The quake made rocks rain down on the Seward Highway. Even before then, DOT was planning fixes. 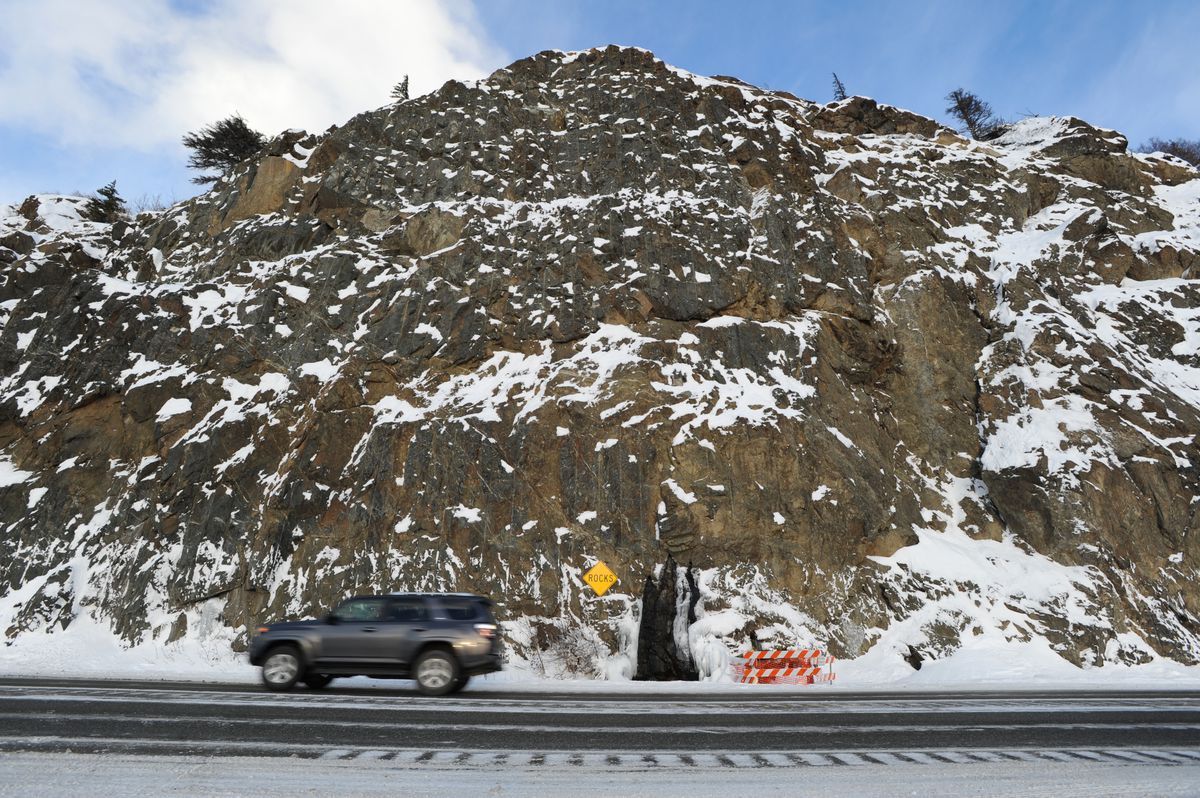 The water pipe at mile 109 on the Seward Highway has been temporarily removed. Photographed Dec. 21, 2018. (Anne Raup / ADN)

The water pipe at mile 109 on the Seward Highway has been temporarily removed. Photographed Dec. 21, 2018. (Anne Raup / ADN)

The big earthquake that struck Southcentral Alaska on Nov. 30 dislodged several dump trucks’ worth of rocks and debris from the steep rock walls that line the Seward Highway along Turnagain Arm.

The event underscored a problem well-known to state officials: This stretch of highway is particularly prone to falling rock. The shaking caused a boulder to crash into a semi truck at Mile 111, damaging the truck but sparing the driver. During an aftershock, rocks rained down on a woman who was gathering water from a popular water pipe at Mile 109, causing state officials to temporarily take out the water pipe altogether.

Even before the earthquake, though, the state Department of Transportation and Public Facilities had set in motion a multimillion-dollar project to deal with rockfall issues between Mileposts 104 and 114. The work, which is early in the design stages, would likely involve prying out loose rock, securing larger boulders with stainless steel bolts and building mesh nets that can catch falling debris.

As part of the project, small streams may be rerouted, and there could be blasting or excavating to get rid of loose rock, said the project manager, Christina Huber.

It’s the first time in more than two decades this type of work has been aimed at this section of road, Huber said. Freeze-melt cycles have changed the landscape, loosened rock and opened up new cracks.

The recent earthquake also confirmed the need for the project, Huber said.

“If anything, the earthquake showed we’re working in the right area with this project,” Huber said.

[The curious popularity of a water pipe on the Seward Highway]

For years, DOT has ranked the vulnerability of different rockfall-prone sites. The ranking reflects how often rocks tumble to the road, how big they are and how much traffic is driving through, Huber said.

Many of the highest-ranked sites fall on the Seward Highway between Potter Marsh and Girdwood. When the highway was first built, engineers put in particularly steep rock cuts, said Craig Boeckman, a geologist with DOT. He said the rock faces wouldn’t be so steep if they were built under current standards.

Meanwhile, most of the ditches along Turnagain Arm are narrow, ranging from 7 to 15 feet, Boeckman said. If the ditches were dug today, they would likely be twice that size, he said.

During the earthquake, the heaviest rockfall happened at Mile 113.9, close to a weigh station, according to Boeckman. In all, the quake dislodged rocks at 25 spots along the highway, adding up to about five dump trucks’ worth of debris, he said.

A video posted on a Facebook forum called My Home Is Alaska showed a driver navigating past a series of boulders.

Officials have already picked out seven sites between Anchorage and Girdwood. All are in the top 20 of the statewide DOT risk ranking and don’t require extensive work to improve safety, Huber said.

Here’s a list of the mileposts where work is planned:

The price tag is currently estimated at about $15 million, with more than 90 percent of the money coming from a federal highway safety program, Huber said.

Federal money would also cover repairs to the stretches of road damaged by rock dislodged by work crews, Huber said. In some cases, air compressors can be used to force rocks loose, Boeckman said.

Construction for the project is slated to start in summer 2020. Officials are currently working on an environmental analysis.