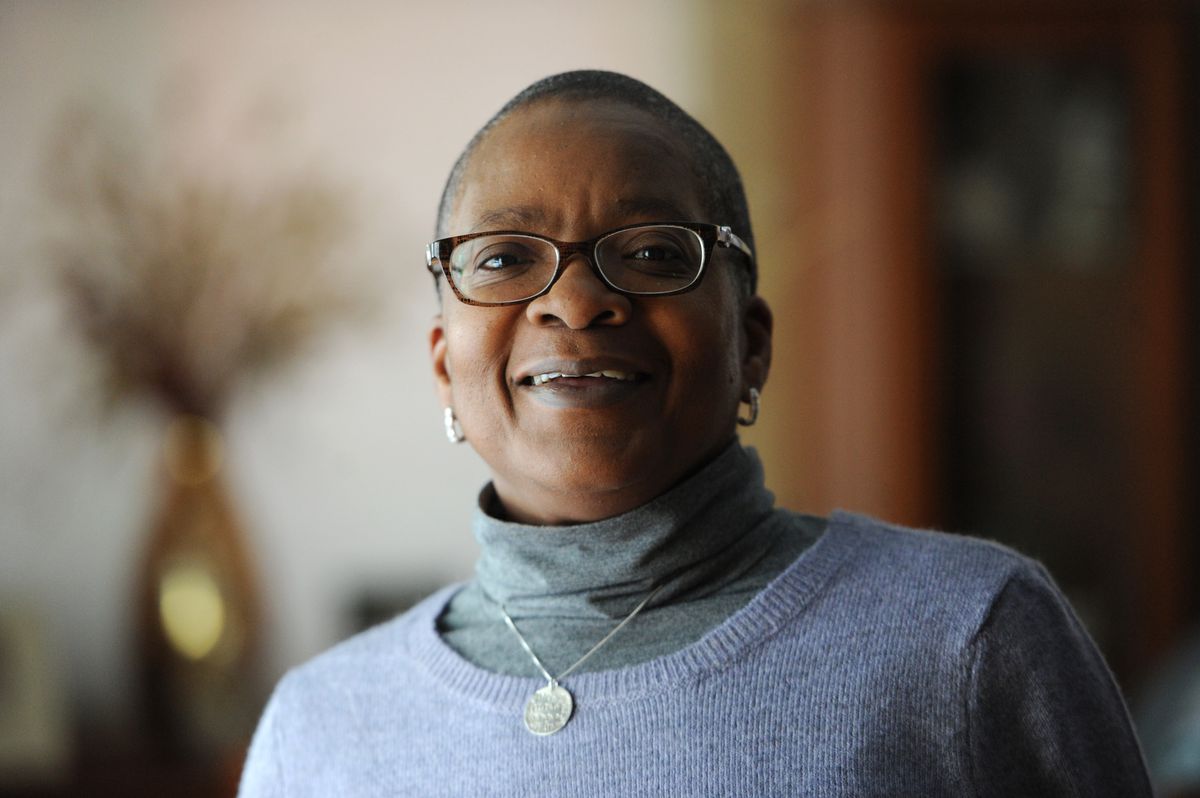 Barbara Spivey at her Anchorage home on Jan. 15, 2019, during the partial federal government shutdown. Spivey works for the Bureau of Ocean Energy Management, within the Department of Interior. (Bill Roth/ ADN)

Barbara Spivey at her Anchorage home on Jan. 15, 2019, during the partial federal government shutdown. Spivey works for the Bureau of Ocean Energy Management, within the Department of Interior. (Bill Roth/ ADN)

Barbara Spivey had planned some time off in December, for Christmas and also for a gallbladder surgery.

But she wasn’t prepared to sign furlough paperwork after the holiday, or for the weeks of uncertainty that have followed.

Spivey works as a government information specialist for the Bureau of Ocean Energy Management, within the U.S. Department of the Interior. She’s hasn’t worked for weeks because of the federal government’s partial shutdown, now the longest in U.S. history.

“I’m getting a little depressed, not knowing when this is going to end,” said Spivey, who lives in Anchorage’s Airport Heights neighborhood. “I think I’m just really stressed out.”

She has a mortgage, and reached out to Wells Fargo to ask what her options are for furloughed workers to manage payments. There’s also the car payment, and the utility bills.

“I’m one of the lucky ones, have savings, but they’re dwindling quickly,” she said.

Nationwide, the shutdown affects about 800,000 workers across nine federal agencies, as President Donald Trump insists on funding for a border wall. In Alaska, more than 5,200 federal employees missed a paycheck earlier this month, according to a representative for the American Federation of Government Employees union.

Kyle Van Peursem is a representative of the National Weather Service’s union, and works as a meteorologist at the agency’s Anchorage office. He's still working during the shutdown, but not getting paid.

His family has savings to last them at least six months, he said.

“So for me, it’s not panicking or anything, just an inconvenience, I guess,” said Van Peursem, who lives with his wife and their three-month-old daughter in West Anchorage. “For other people in our office, it might not be the case. I think if the shutdown starts pushing three, four, five missed paychecks, things will start getting interesting, a little more dire for people.”

In a typical work week, Spivey would be at her office at 3801 Centerpoint Drive in Midtown Anchorage. Alongside federal offices in that building, there are also real estate business offices there.

At the small cafe in the lobby, business has been slow, to say the least. Manager Sheryl Chriest said she’s closed the shop early a few days because it was so dead. Her two part-time employees who work there are going without their usual tips.

The first week without many of the morning regulars was “kind of chill,” Chriest said. But as the shutdown has carried on, it’s harder to deal with. Federal employees are usually her consistent employee base.

“I’m just bored out of my tree,” Chriest said. The slowdown is also affecting how much she orders from her vendors.

“The trickle-down effect is definitely happening,” she said.

Organizations around town are helping as they can. AK Joy Church, which has a small congregation of about 20 members, recently dropped some bags of food off at Ted Stevens Anchorage International Airport for federal employees there who are working unpaid.

Shayna Bialik is a co-pastor at that church — located off East Tudor Road and Lake Otis Parkway, and formerly called Joy Christian Center — and said she recently got back from vacation and noticed a change in demeanor among airport workers.

“The TSA agents were grumpy, and I would be too,” she said. This weekend, the church is working on putting together another meal to drop off at the airport for 180 workers affected by the shutdown.

“It’s one meal, but it’s something,” Bialik said. “We know there’s obviously thousands of other federal employees, but being a small church, we can only do so much.”

The Armed Services YMCA of Alaska has five food pantries in the state that are usually available to members of the military. During the shutdown, the organization has opened that up to every federal worker who has access to the installations where the pantries are.

The nonprofit is helping “fill the gaps in services and needs,” said executive director Sarah Riffer.

“It’s really no different than what we do every single day," she said, “it’s just a bit busier right now.”

Spivey wants to get back to work for more than just her paycheck, she said. It’s also the routine, and the fact that a lot of people in her social circle are carrying on with their jobs.

“I’m at the point now where, I don’t leave the house that much,” she said. “Every time you leave the house, you spend money. You go to the store to buy milk, you leave with $25 of other crap.”

In Van Peursem’s office, meteorologists can only perform essential duties related to the protection of life and property, he said. That means not much else besides the forecast and related advisories.

“They’re going to keep doing the job and putting the forecast out and getting the warnings out and making sure people are aware,” he said. “For them, it’s a passion. ... Hopefully the shutdown ends and we can get paid. But the mission won’t stop.”