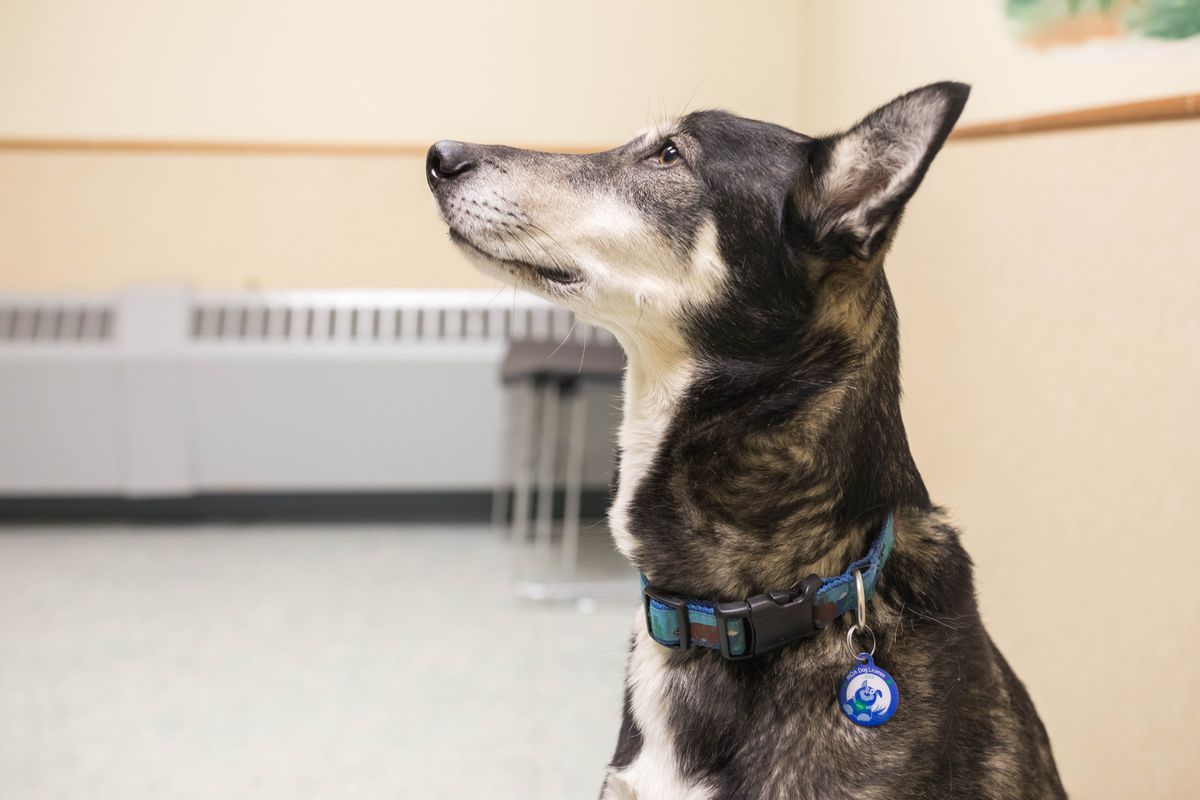 Whisper, a dog owned by Laura Atwood, shows off his new QR-coded license tag on Feb. 12 at the Anchorage Animal Care and Control Center. The new tags can help expedite reunions of lost pets with their families. (Loren Holmes / ADN)

Whisper, a dog owned by Laura Atwood, shows off his new QR-coded license tag on Feb. 12 at the Anchorage Animal Care and Control Center. The new tags can help expedite reunions of lost pets with their families. (Loren Holmes / ADN)

Scanning the tag with a smartphone pulls up a webpage with a profile for the pet, which can include multiple contact numbers, health information and eating preferences.

Shelter communications director Laura Atwood’s husky, Whisper, has a digital tag and a page. The page lists five phone numbers, along with Whisper’s birthday, his microchip ID and a physical description that includes a notch missing from his tongue.

“He is not food motivated so coaxing him with food may not work unless it’s real chicken or turkey,” the page says. “Or pizza.”

If Whisper got lost, his finder could send a GPS location through the page, Atwood said. Atwood would also get a text telling her that the code was scanned.

The tag comes with a red sticker with activation instructions. In one recent case, someone found a lost dog with a digital license that hadn’t yet been activated. The dog ended up staying briefly at the shelter until its family picked it up, according to a post about the incident on the Animal Care and Control Facebook page.

Activating the tag falls to pet owners, not the animal shelter, so the owner can decide what information to provide to the call center, Atwood said.

The tags are the latest example of Anchorage city government tapping into QR code technology.

At the Anchorage cemetery, families have the option of paying $150 for a QR code to accompany the gravesite of a loved one. The codes are mounted on the columbarium wall. A smartphone scan launches a memorial website.

About a dozen families have purchased the codes since the program began a few years ago, said cemetery director Rob Jones.

The cemetery has also purchased a code to be placed near the whale bones that mark the graves of a whaling captain and his wife, Jones said. He said it would be a way to tell the story of the whale bones, which mark the center of the city cemetery.

In the case of the city animal shelter’s foray into digitizing, Atwood said she learned about the digital pet licenses at a conference in 2018.

“It’s just truly a way to help reunite lost dogs more quick with their owners, and without the animal having to come through the shelter,” Atwood said.

Anchorage resident Cynthia White manages two different Facebook pages for lost pets. She spends a lot of time connecting pet owners to resources, making posters and loaning out animal traps. The digital licenses are a good way to use new technology and make it easier for people to track down lost pets, White said.

But White also urged pet owners and animal shelter staff to update microchip data, which she said is often out-of-date.

“So many dogs get lost who do not have a collar on,” White said.

Atwood also said the new licenses do not take the place of microchips. She said the tags are meant to be an additional tool to help pet owners.

The new digital tags can be purchased at the Anchorage animal shelter off Elmore Road, at most veterinary offices or online at lovemewithalicense.com.

If it’s a first-time license application or a renewal, the current fees apply, Atwood said. Duplicating an existing license to add a digital tag costs an extra $5.