To wash or not to wash: Spring melt makes for grimy cars around Anchorage 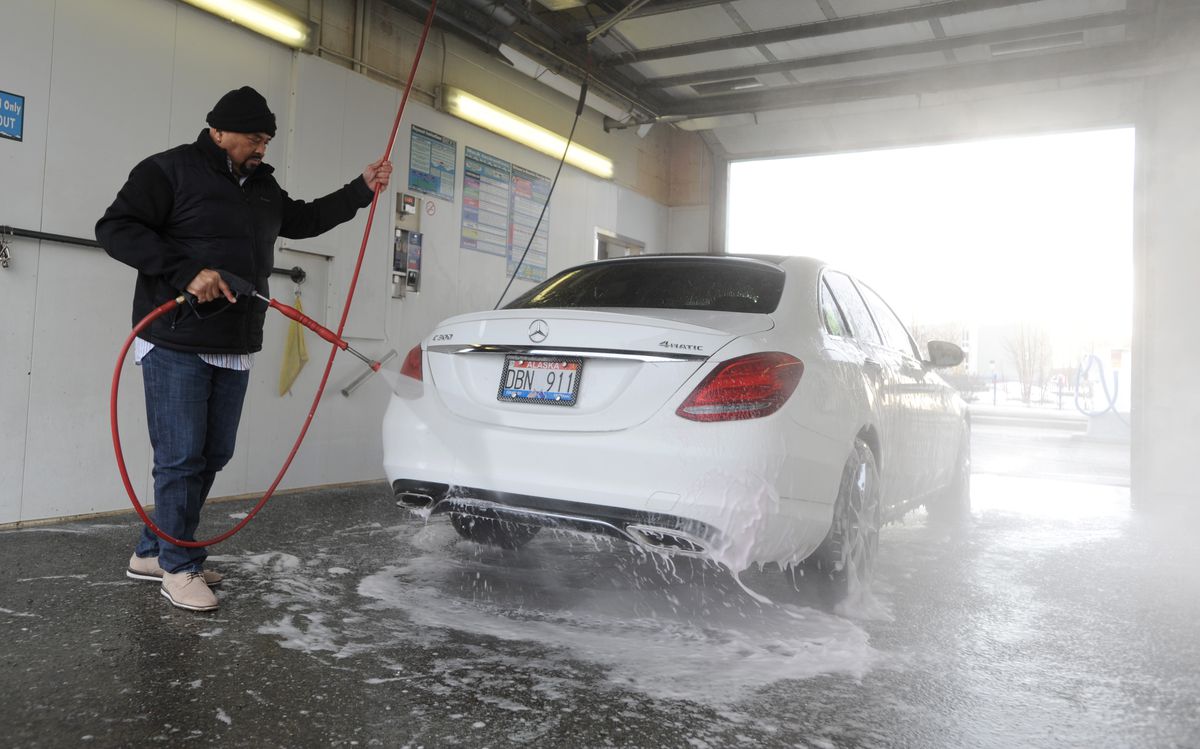 It’s a filthy time of year in Southcentral Alaska, and Lindwood Parker is determined to keep his white Mercedes-Benz pristine.

For about a month in the springtime, he washes it by hand every day at the self-serve Mountain View Car Wash.

Not everyone is so diligent. As ice and snow melt, plenty of cars rolling around Anchorage are covered in solid layers of dust and grime. Water splashes as vehicles roll through mini lakes that pool on residential streets. Some license plates aren’t even readable under all the scum.

“It feels good to drive a nice, clean car when everybody else’s is dirty,” Parker said before he sprayed a layer of suds off his car Thursday afternoon.

Mountain View Car Wash is open 24 hours a day. It’s busy as the Anchorage region moves into spring breakup season, when river ice breaks apart and snow fades away. Cars lined up there Thursday to pull into the bays.

Most people don’t bother so much with deep cleaning this early in the season, said Dwight Bowser, one of the owners. Right now, it’s more about the quick rinse.

“Everything is dirty, and everything is sloppy,” he said. “As things dry up a bit, they spend more time getting things good and clean.”

Noah Gotthardt usually washes his black Buick about once a month throughout the year. But in mucky spring, he shoots for once a week. He was at the Mountain View Car Wash because he prefers the self-service to the drive-thru automatics in Eagle River where he lives.

So does Jan Rogers, who called the automatics a waste of time and money in the Anchorage spring because they “get hardly anything off.”

She lives in Anchorage and drives a white Chevrolet Silverado that she rarely cleans throughout the year. But in the last couple of weeks she’s washed it twice; she has a small garage, and getting dirty sliding in and out of the driver’s seat has become inevitable.

“You touch it and get a pound of filth all over your clothes,” Rogers said as she scrubbed the rear window.

Potholes and huge puddles are season signatures, too. You can call the city’s maintenance line at 907-343-8277 to report a pothole that needs fixing or if you have blocked drains. About two weeks ago, the Municipality of Anchorage started its annual work of sending trucks around town to open up drains to get rid of standing water.

Cars get so dirty because of the winter’s worth of sand on all the streets and parking lots, said Paul VanLandingham, street maintenance manager with the city. In coming weeks, he said, the city hopes to start sweeping the roads to clear sand away.

“We’re not out of the woods yet, but we’re hoping that it’s done and we’re getting ready for summer,” he said.

Almost every day this March in Anchorage has had higher temperatures than the most recent three-decade temperature averages measured between 1981 and 2010, according to the National Weather Service.

“This is an early but slow warm-up,” said Jessica Cherry, a senior hydrologist with NWS. In coming weeks, the agency will put out a formal forecast for breakup season.

The Anchorage Daily News posed the question to readers on the neighborhood-focused social media website Nextdoor: How often do you wash your car this time of year as we move into spring breakup?

“I washed mine yesterday — and it was a lesson in futility!!!” one person commented. “But I couldn’t stand it any longer. I get filthy just trying to get groceries in/out.” Another said she washed her car every day last week.

Careful, though — if your car is gross enough that dirt covers your license plate or registration sticker, you can get a ticket and a $100 fine from the city.

Since January 2015, Anchorage police have issued 136 citations under an ordinance that says your plates and stickers can’t be “obscured or covered by dirt or debris, a tinted or shaded cover plate, any nontransparent covering, or any coating not provided by the manufacturer of the license plate," said police spokeswoman Renee Oistad.

“When people wipe off their headlights and windows, they should also make wiping off both license plates as part of their cleaning routine,” Oistad said. Officers see the problem more around winter and spring, whether from snow or dirt.

During spring melt, people seem to be more interested in cleaning the interiors of their cars than the exteriors, said Daniel Duke-Williams, manager at Purple Turtle Fine Auto Detailing in Anchorage. Parker, with the Mercedes, said he gets his car detailed professionally every six months.

“Most people don’t want to get their outside done until all the breakup’s gone,” said Duke-Williams, “which totally makes sense, because as soon as you leave here it’s gonna get dirty again.”