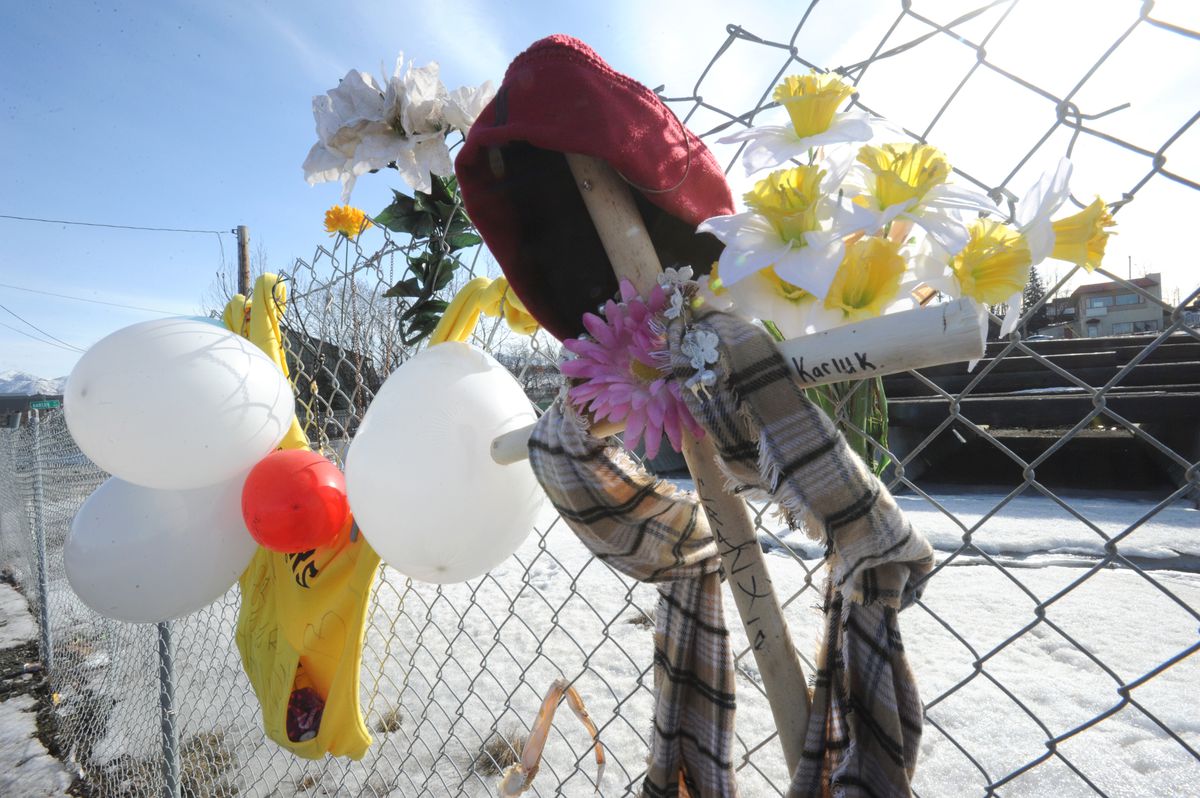 A memorial to Shannon M. Henning hangs on a fence along Third Avenue in Anchorage. Henning was killed Friday when she was struck by a pickup truck, police said. (Bill Roth / ADN)

A memorial to Shannon M. Henning hangs on a fence along Third Avenue in Anchorage. Henning was killed Friday when she was struck by a pickup truck, police said. (Bill Roth / ADN)

City officials are making plans to improve pedestrian safety along the Anchorage road where a woman was killed Friday when, police say, she stepped in front of a pickup truck.

Shannon M. Henning, 25, of Anchorage “emerged from a group of people on the side of the road” on Third Avenue near Karluk Street, crossing in front of a pickup whose driver had a blood alcohol level nearly twice the legal limit for driving, police said.

Henning was pronounced dead at the scene, and the driver, 29-year-old Lagiula Mauga, was charged with operating a vehicle under the influence.

The stretch of Third Avenue between Ingra Street and Post Road where Henning was hit has been the site of multiple pedestrian collisions.

Nine pedestrians were hit on that stretch from 2014 to 2016, according to municipal traffic data. In November, a woman was killed in a hit-and-run at the intersection with nearby Orca Street.

The municipality is planning to reduce the number of lanes along Third Avenue, a westbound one-way street, from three to two in hopes that it will slow the 8,600 cars that travel that stretch every day, said Charles Boyle, a spokesman for the Anchorage public works department.

“What we find is that when the road is wider, people tend to drive faster,” Boyle said.

The $5 million project would open up space for a widened sidewalk, Boyle said, and would also reduce the crossing distance for pedestrians — another risk factor in pedestrian collisions.

Construction is expected to begin on the project in summer 2020, Boyle said.

Renee Oistad, a spokeswoman for the Anchorage Police Department, said detectives are still investigating why Henning stepped out into the road.

Oistad said Henning was not homeless, though Lisa Sauder, executive director of the nearby Bean’s Cafe soup kitchen, said in an email that the she was known to people there.

A representative from Catholic Social Services, which operates the adjacent Brother Francis Shelter, would not say whether Henning had been staying there.

“This sad event shines a light on two important issues in Anchorage: pedestrian safety as well as substance abuse and misuse. I hope we can all work together to address them,” Lisa Aquino, the director of Catholic Social Services, wrote in an emailed statement.

Mauga, the driver who hit Henning, has no prior criminal record in Alaska. She bailed out of jail on Tuesday on $1,000 bond.