The dusty season has arrived early. Here are some things that might surprise you. 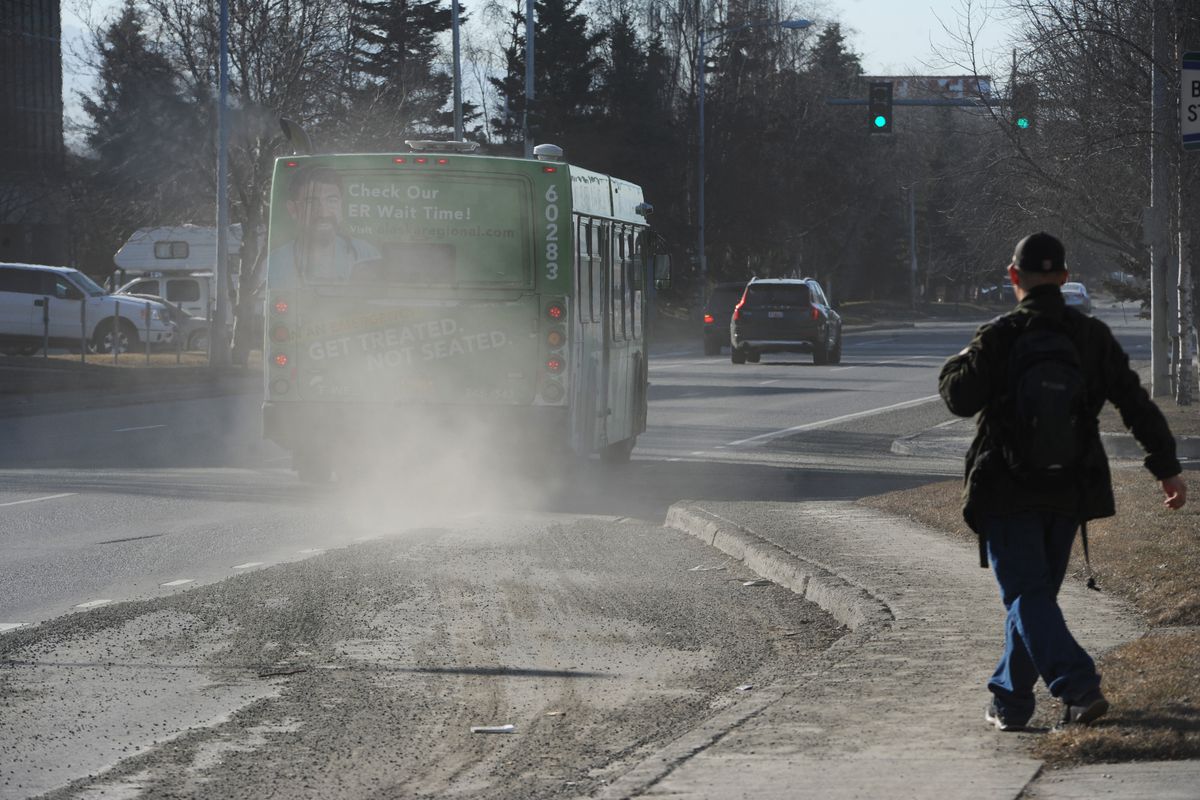 The season of spring road dust in Anchorage is about three weeks early, coming along with the early spring weather. So far, the city hasn’t issued any air quality warnings, but since the roads have been clear of snow, there have been periods in the mornings and late afternoons when the level of particulate matter in the air is not healthy for sensitive groups.

“We certainly have a concentrated dust season because of how rapidly the melt occurred,” said Matthew Stichick, an air quality specialist with the municipality.

Stichick monitors air quality and works with road crews to mitigate dust. He answered some questions this week about dust.

Where does the springtime dust come from?

The dust is made from fine particles of road grit. Large roads with lots of high-speed traffic make the most. The grit accumulates over winter and is suspended in the snow until spring. Snow removal in the late winter is partially about reducing dust in the air in the spring, he said. Rapid melts like the one we’ve had over the last two weeks concentrate the dust in the air.

“It’s a whole winter’s worth is melting out on the street at once,” Stichick said.

What triggers an air quality advisory?

There are two systems for keeping track of particulate matter in the air. The state tracks the air quality in real time and shares the results online, and the city uses a 24-hour average, which is updated daily on its website. (You can also call 907-343-4899 to hear the latest air quality update.) The city issues air quality advisories based on its numbers. When the particulates in the air exceed 100 micrograms per cubic meter for a 24-hour period, the city will issue an advisory for sensitive groups. Over 150 micrograms per cubic meter is considered unhealthy for all groups.

Why are mornings and evenings dustier?

The uptick in dust in the morning comes with the commute between 7 a.m. and 8 a.m. and stays elevated until about 10 a.m., when the air warms up, Stichick said. In the evening, the air compresses as it cools, pushing the particles down and concentrating them. The cool air is also drier. Moisture controls dust, and dry air does the opposite.

“What we tell people, if you are experiencing any discomfort or you know you have sensitivities, avoid major traffic thoroughfares during the morning commute and the evening commute into the evening hours," Stichick said.

How does the city control dust?

The city is presently wet-sweeping the streets using a method called a “sweeper train.” The first truck wets the streets and three sweeper trucks follow. The first sweeper truck picks up heavy materials, the next one sweeps whatever is left and the last one does a slow, methodical sweep, Stichick said. After that, they apply more water to the road. The state waits to sweep larger state-maintained arteries until nighttime temperatures are above freezing, Stichick said.

He said the most effective method for controlling dust is to apply a magnesium chloride brine, a salt solution that temporarily coats the street surface, keeping dust in. The city tends to use that on larger roads, Stichick said.

“We have to judicious about the use of it. It is fairly expensive,” he said.

Magnesium chloride can also be unhealthy for salmon streams because it is a salt, he said. The city sends letters to contractors and owners of large parking lots, asking them to clear the lots of gravel using water. If a homeowner or business is creating excessive dust that is leaving their property, they are in violation of city code, he said.

What can people do to minimize dust?

The main thing, Stichick said, is to keep dust wet. Removing dust using a hose or power sprayer is the recommended method. Leaf blowers lead to lots of complaints because they stir up so much dust, he said.

“Because it is so problematic, we just discourage people from using them at all,” he said.

An earlier version of this story used the incorrect unit of measure for the city’s air quality index, it is micrograms per cubic meter, not parts per million.