An Anchorage man jumped out of a taxi on his way home from a psychiatric hospitalization. He was never seen alive again. 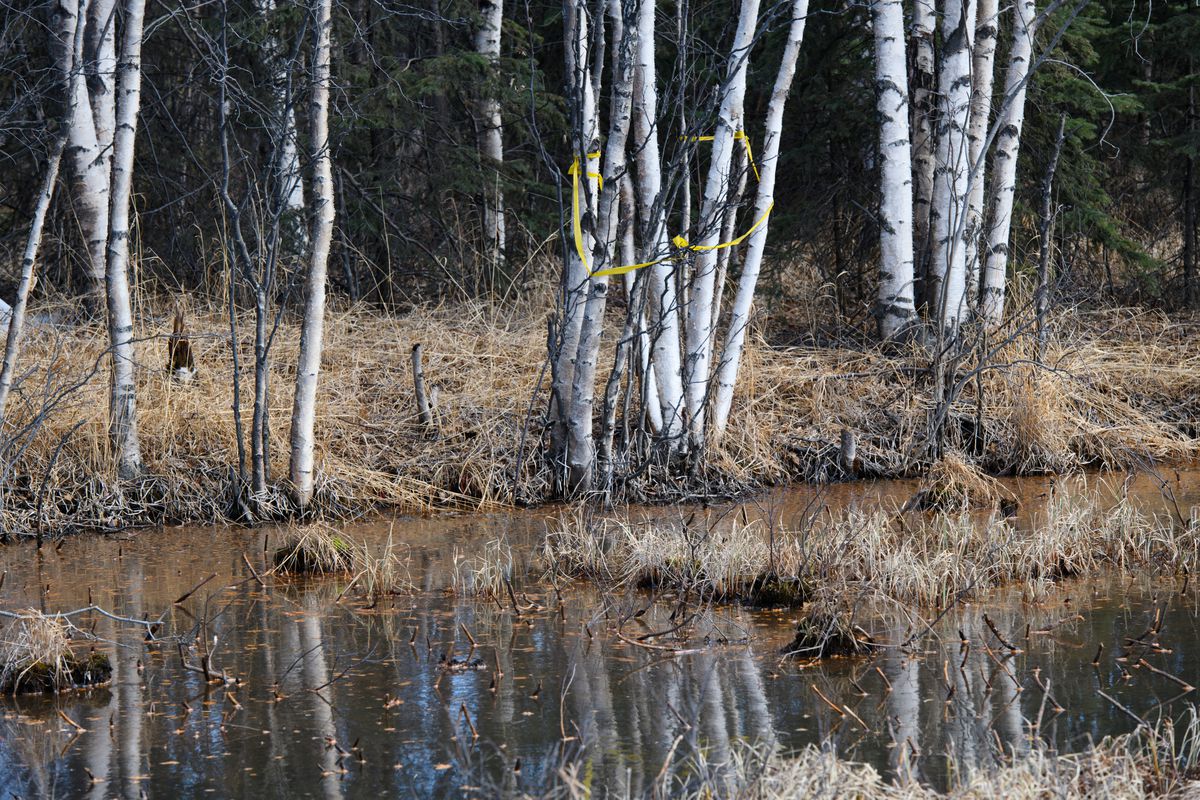 One frigid November afternoon in 2017, Grant Orand left an Anchorage psychiatric emergency department in a taxi.

For a month, the 53-year-old former UPS worker had been cycling through hospitals, gripped by psychosis. A day earlier, he’d been admitted to the Providence Alaska Medical Center psychiatric emergency department after taking off all his clothes in the back of his parents’ car.

On this day, he’d told a medical resident examining him that his “main complaint was visual hallucinations of demons,” according to an excerpt of his treatment records contained in court filings.

The hospital found him not gravely disabled or in imminent danger of harming himself or someone else — the standard needed to involuntarily commit someone in Alaska. He was deemed well enough to leave.

Orand never made it home. The taxi driver later told the hospital that his passenger had jumped out of the cab near the intersection of Tudor Road and Checkmate Drive in East Anchorage.

It was Nov. 19, and 17 degrees outside. The first big snow of winter was falling over Anchorage in the afternoon twilight. No one saw him alive again.

Nearly three months later, in February, his body was found naked, except for a pair of hospital socks, in a stand of birch trees on the edge of a snow dump.

Orand’s death illustrates a complex problem that Alaska’s crumbling psychiatric infrastructure is even less equipped to deal with today than it was in fall 2017: Clinicians must make constant, rapid-fire judgment calls about who is safe to be released and who is not.

Many people cycle through short periods of hospitalization and release, brought to the hospital by bizarre or disturbing behavior but found not to meet a legal standard to hold them against their will. For those who are released, there isn’t much waiting on the other side of the hospital doors at discharge.

Some mental health professionals say Alaska’s laws are part of the problem. They assert that the legal standard to keep someone hospitalized involuntarily in Alaska is so high patients are released when they aren’t really safe to be on their own — and clinicians get blamed when things end tragically.

Today, the whole ragged system is under additional pressure. With less than 20 beds available at the Alaska Psychiatric Institute, there’s a lengthy wait list for a spot in longer-term treatment.

Now, the courts will examine whether Grant Orand’s death could have been prevented — and what it tells us about the way Alaska’s fragile psychiatric care system functions.

A lawsuit that Orand’s family filed in March against Providence Alaska Medical Center charges that the hospital, which operates the only dedicated psychiatric emergency room in Alaska, negligently discharged Orand, leading to a gruesome death.

“It’s a terrible feeling to know your son died in the dark, naked and all by himself,” said Grant’s father Buddy Orand, who is 83.

Providence doesn’t comment on pending litigation. In a statement, the hospital said it was “always concerned for the health and safety of our patients.”

The Orand family’s attorney, Jeff Vance, said the case rests on the question of why Grant Orand was allowed to go home on his own, despite exhibiting dangerous behavior repeatedly at the same hospital.

“He was a deeply mentally unstable man that was prematurely discharged, and was certainly discharged on his own versus in the care of family as had been the practice before.”

The lawsuit complaint is “just painful to read,” he said.

Orand’s death represents a nightmare scenario for mental health care providers: a patient going directly from a hospital to his own death, said Sara West, a forensic psychiatrist and assistant professor at Case Western Reserve University School of Medicine in Cleveland, Ohio.

It also illustrates the high-stakes daily calculus that workers in the world of psychiatric care must make: Does this person meet the legal standard to be released? If so, where do they go?

Ideally, a patient would be discharged to a social worker at an organization that could help make sure they take their medicine and go to follow-up appointments, and have a safe place to stay.

“I think cases like this are canaries in the coal mine,” said David Fleurant, director of the Disability Law Center of Alaska. “There is not a continuum of care for people with mental health disorders, or intellectual disabilities or even dementia.”

Leaving the hospital after a crisis should be a “step-down” process, he said. Instead “it’s like a cliff.”

Joseph “Grant” Orand was born in Texas but raised in Anchorage, the only child of Buddy and Jolene Orand. A leader of the neighborhood pack of kids, he had a mostly happy childhood, according to his parents.

As a young adult, he suffered from bouts of depression but managed to hold down a job at UPS and buy a house in East Anchorage, not far from his parents. He liked to hike and play with his golden retrievers, they said. He was well into his in his 40s by the time he married Marcela Orand.

Then, in 2015, his wife was accused of molesting a child at the day care she’d run out of their East Anchorage house, according to court records. Grant Orand believed in his wife’s innocence. But in 2016, she eventually agreed to a plea deal that sent her to prison for 10 years.

Orand began drinking heavily, consuming a bottle of hard alcohol per day. His behavior became impulsive and bizarre, his parents said. He gave away his big screen TV and appliances to strangers. He lost his job. His parents got rid of almost everything in his house so he couldn’t trash it or destroy it. He asked his dad to take him on a drive one night, then jumped out of the car, found a giant rock and heaved it through the glass window, his parents said.

By fall 2017, Orand became so unstable that his elderly parents began to take turns watching over him 24 hours a day.

On Oct. 17, he slipped into the backyard and stabbed himself in the throat with a kitchen knife. His parents rushed him to the hospital, where he had emergency surgery.

The incident kicked off a month of cycling through the Providence psychiatric emergency room, with brief stays at the Alaska Psychiatric Institute and his parents’ house. To keep him hospitalized against his will under Alaska’s Title 47, medical professionals would need to find that Orand’s illness rendered him “gravely disabled” or a risk to himself or others.

He would meet that standard, and then he wouldn’t, and he would be discharged, his parents said.

Doctors noted that he seemed to be losing his grip on reality, according to the complaint. On Nov. 4, a doctor noted that Grant Orand was “making statements like ‘they want to kill me’ and ‘the demons look like werewolves.’”

A doctor wrote that Orand “had been in and out of API recently. He has multiple ex-partes. (Legal orders for involuntary commitment.) He has elderly parents in their 80s who help take care of him… patient continues to present as gravely disabled, responding to internal stimuli...exhibiting manic thinking patterns, i.e. racing thoughts and fleeting thoughts to harm self.” The excerpts of his medical records say he was diagnosed with bipolar disorder.

On Nov. 18 he was again admitted, naked, to Providence’s psychiatric ER, at least the third time in a month, according to an account in the lawsuit complaint.

That time, a licensed professional counselor evaluated Orand. She noted that he was “reluctant to engage” and at times appeared to be “pretending to be falling asleep” and theatrically apologized when she tried to wake him.

When he was asked about whether he was suicidal or homicidal, he said yes but closed his eyes and made snoring noises, she wrote. The evaluation lasted 28 minutes.

The next day a medical resident visited Orand for an evaluation, according to the treatment record excerpts in the lawsuit.

“His main complaint today is visual hallucinations of demons,” she wrote.

He also talked about the water being poisoned and someone trying to ruin his life, according to the treatment record.

She noted that he didn’t try to harm himself or say anything that indicated he would hurt himself in the future. He had a “sub-therapeutic” level of lithium, a mood-stabilizing medication, in his blood and needed to get more of it.

“Patient is discharged from (the emergency department) with cab vouchers, warm clothing and shoes to return to his home,” the notes from his file said, according to the lawsuit complaint.

Vance, the Orand family’s attorney, says the treatment records suggests Grant Orand should have been found gravely disabled and unable to care for himself. If the case goes to trial, that will likely be debated in court.

‘We couldn’t believe it’

Around the time that Orand left the hospital, his parents were in the car on their way to see him. They missed a call to their home phone saying he was being released. By the time they got to the hospital he was already gone.

They rushed to his house on Checkmate Drive, knowing he had no key and no way of getting inside. Nobody was there. They called the hospital again and learned that, according to the taxi driver, Grant Orand had jumped out of the cab near his home “and was running down the road,” the lawsuit says.

They called the Anchorage Police Department. A dispatch bulletin was sent to the public with Orand’s picture on it. That day, another mentally ill man had also gone missing so the disappearances of the two men shared a single press release.

Buddy and Jolene Orand spent the next months searching for their son. Buddy drove to Wasilla and asked around at the Anchorage Gospel Rescue Mission on Tudor Road. They hoped Grant Orand was simply living on the streets, maybe drinking a lot and off his medications but alive.

They looked and looked until the day in February 2018 when a police officer knocked on their door and told them Orand’s body had been found. They still don’t know where he went that night, how long he was out in the cold, or how he got to the wooded area near the snow dump on Brayton Drive.

Buddy Orand says he blames himself for taking his son to the hospital at all.