This historic South Addition house might get demolished. A neighbor wants to move it a block to save it. 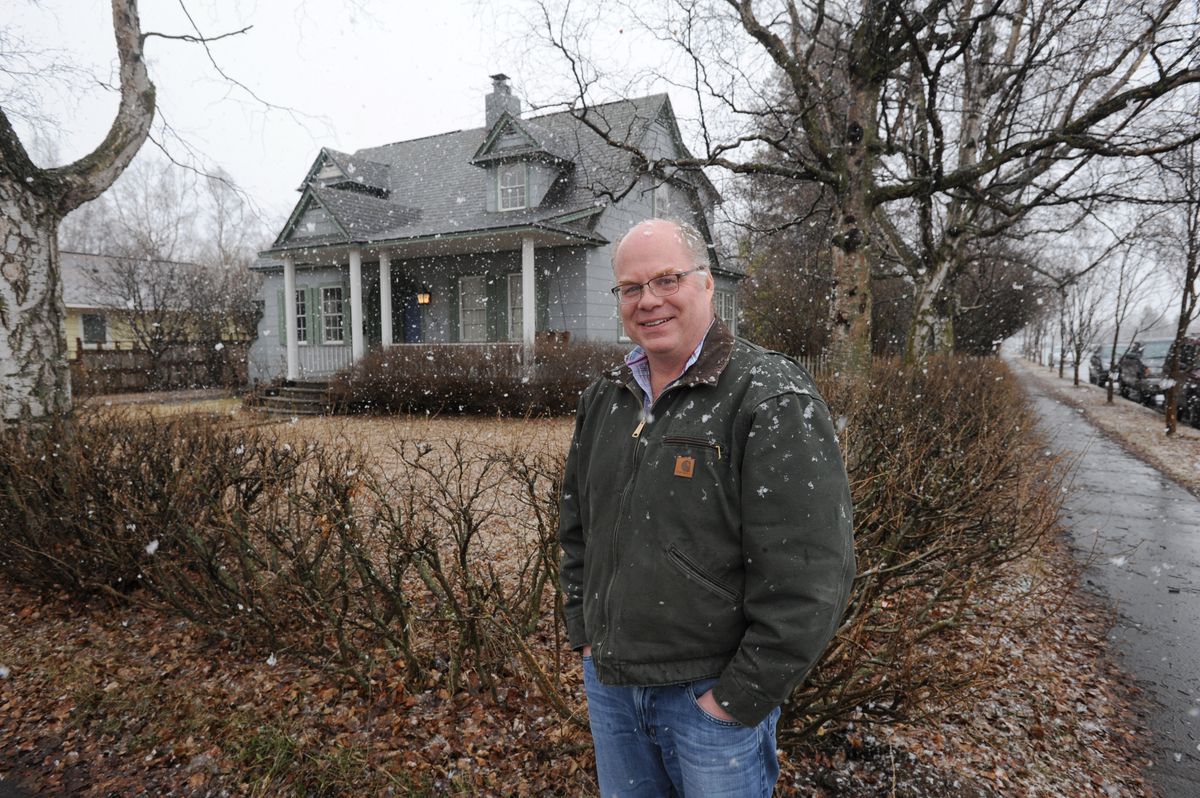 Joe Dugan is trying to save the Shonbeck house across from the Delaney Park Strip from being demolished by a developer who is planning a new development on the property. Dugan would like to move the home to a lot he owns about a block away in South Addition. Wednesday, April 17, 2019. (Bill Roth / ADN)

Joe Dugan is trying to save the Shonbeck house across from the Delaney Park Strip from being demolished by a developer who is planning a new development on the property. Dugan would like to move the home to a lot he owns about a block away in South Addition. Wednesday, April 17, 2019. (Bill Roth / ADN)

The Cape Cod-style house at 1006 G St., a few steps from Anchorage’s Delaney Park Strip, is charming, with white columns on the porch and green trim against a pale blue-gray exterior. Its most distinctive feature is its rounded doorway, featuring thick layers of recessed arches.

The historic South Addition home was built in the late 1930s by Arthur A. Shonbeck, a figure from Anchorage’s early days. It is now in danger of being razed to make way for new townhomes. A neighbor wants to save it, but doing so is complicated.

South Addition was one of Anchorage’s four original neighborhoods — along with downtown, Government Hill and Fairview. Planning began in the early 1900s. Many of the houses are World War II-era and some are older, with distinctive architectural styles and details that you don’t typically see in South Anchorage, Midtown or Spenard. Birches and mature hedges line the sidewalks.

The Shonbeck house is one of 40 properties in the the neighborhood described in the Alaska Heritage Resources Survey, a listing of historic resources in the state.

Arthur Shonbeck, the man who built it, came to Alaska from Wisconsin in the late 1800s. He was in his early 20s and in search of gold, according to a description from the Cook Inlet Historical Society. He later operated a retail, wholesale and outfitting business called Shonbeck General Merchandise. Eventually he became a director of National Bank of Alaska. He was the first among 16 people who “weathered the early storms which determined the town’s destiny," according to a 1957 book about Anchorage by Evangeline Atwood.

Most people know the house by its distinct doorway, which creates something of an optical illusion that makes the door look shrunken.

“In my mind, it’s the entrance to the hobbit home,” said Joe Dugan, the neighbor trying to save it.

Dugan owns several houses in the neighborhood. One of those is a rental with a mostly empty yard on H Street, just around the corner. The plan, he said, is to get a house-relocating company to pick the Shonbeck house up and bring it over there.

“It’s a house that I looked at all of my life,” Dugan said. “Coming into South Addition from the Park Strip, coming down G Street, that’s, like, this very handsome street. That’s the most appealing entrance into a neighborhood I can think of off the Park Strip.”

The problem: City zoning rules say Dugan’s lot is too small to just set the house down in the backyard.

With the help of an architect, Dugan requested two zoning exceptions from the city to allow him to move forward with the project. Those requests were denied by the Zoning Board of Examiners and Appeals last week.

"My interest was like, really, are you serious? We don’t have enough flexibility in our zoning code to do something reasonable?” said Seth Andersen, who lives in the neighborhood and is a member of the city’s planning and zoning commission.

Two single-family homes aren’t allowed on Dugan’s lot, but a duplex is, said Francis McLaughlin, a senior planner with the city. If Dugan does end up relocating the house, he’ll need to make it qualify as a duplex. That will involve making the two buildings touch or be structurally connected in some way.

For some in the neighborhood, saving the house isn’t just about one property. It’s about preserving character in one of the few truly old neighborhoods in a relatively young city.

“There aren’t many historic neighborhoods in Anchorage,” said Moira Gallagher, president of the South Addition Community Council. “A city needs history. It’s an important touchstone for the community. It might seem like just a building, but for a lot of people, it represents how much has happened in South Addition.”

In August last year, Anchorage builder Hultquist Homes bought the property. The plan for the lot is to build four luxury townhomes there, vice president Cody Hultquist said in an email. Those will have a similar exterior design as the sleek, modern townhomes nearby at 804 W. 10th Ave., which Hultquist also built.

The company is “very close” to an agreement with Dugan and hopes to have the house moved in the near future, Hultquist said.

Asked what the timeline would be to demolish the house if it isn’t moved, Hultquist said: “We have not set a firm date as we prefer to make every effort with Joe.”

Jim and Lani Brennan owned the house from 1988 until last year when they sold it to Hultquist Homes and moved to Port Townsend, Washington, where they live during the winter.

They tried to find a buyer who would live in the house and keep it where it is, said Jim Brennan. They even handed out hundreds of flyers around town to get the word out. Most of the people who stopped by were just there to look, he said.

“They would come in and say, ‘This is my favorite house in Anchorage, I’ve been looking at this house since I was a kid,’” he said. “And we’d say, ‘Great, you wanna buy it?’ And we never got an offer approaching what we were looking for.”

So they ended up selling to Hultquist. It was a tough decision, Jim Brennan said, and now they hope it will be saved.

“The location almost doomed the house because the location was so valuable” to developers, he said.

The Shonbeck house isn’t on the National Register of Historic Places, though Alaska’s State Historic Preservation Office has determined it is eligible to be.

“Folks like historic districts, folks like walking downtown and seeing some of the older buildings,” said Monty Rogers, chair of Anchorage’s Historic Preservation Commission. “(But) that’s not necessarily compatible with increased housing demands. An increasing battle across the country.”

A ballpark estimate puts the cost of moving the house at about $40,000 to $50,000, Hultquist said. Dugan would be the one on the hook for that money, and the house itself would essentially cost nothing, he said. He hopes to reach an agreement with Hultquist and get the house moved by May 15.

New development in the neighborhood is wonderful, said Gallagher, on the community council.

“But,” she said, "it’s also nice to see old homes get updated and preserved.”