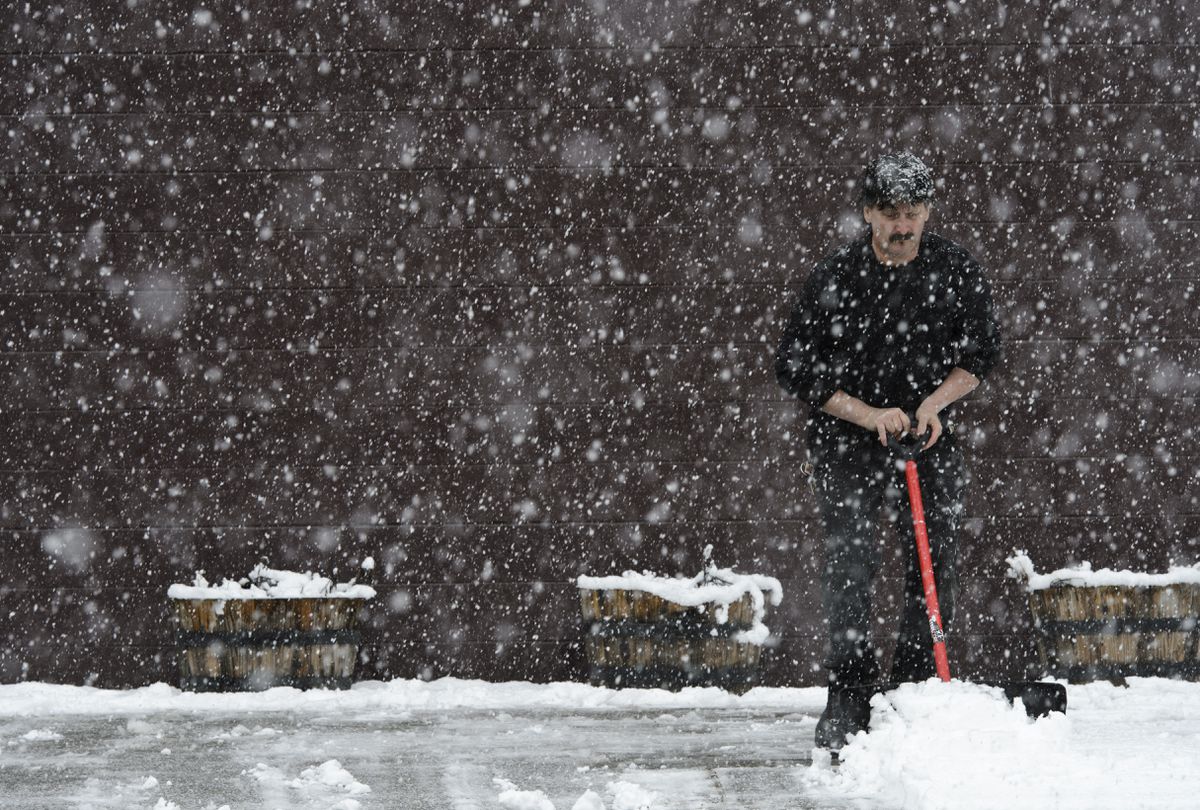 Richard Allred shovels the walkway in front of Sixth Avenue Outfitters in downtown Anchorage during a heavy snowfall on April 22, 2019. (Marc Lester / ADN)

Richard Allred shovels the walkway in front of Sixth Avenue Outfitters in downtown Anchorage during a heavy snowfall on April 22, 2019. (Marc Lester / ADN)

PALMER -- Another round of winter weather Monday dropped a little more snow on Anchorage and Mat-Su, canceling after-school events in the state’s largest city.

The snowy weather came amid National Weather Service warnings of wintry conditions and winds across Alaska, including a winter storm warning through Wednesday for Fairbanks.

Snow fell across the Anchorage Bowl through morning and into early afternoon, with accumulations of 1 to 3 inches and a half-inch of slush on the roads, according to NWS meteorologist Bob Clay. The higher amounts were falling in the eastern part of the city and on the Hillside, with maybe another inch expected in Anchorage and Mat-Su.

Wasilla received about an inch of snow by early afternoon, Sutton a little more, and about 2 inches fell near Eureka, Clay said. More snow -- perhaps 2 to 4 inches -- was expected in the Susitna Valley.

The weather service issued a special weather statement early Monday warning of a potent cold front lifting from south to north, bringing snow to the Matanuska Valley through the northern Susitna Valley and into the Copper River Basin.

Fairbanks was under a wind advisory Monday morning. A rain-snow mix Monday was expected to turn to all snow, with up to 6 inches of accumulation by Tuesday evening and more in the forecast into Wednesday, according to the weather service.

A blizzard warning covered the communities of the Yukon River delta until Monday evening, with 2 inches of snow forecast but difficult to impossible travel conditions.

Wind or winter weather advisories covered the northern half of the state.

Southeast Alaska communities including Juneau were under wind warnings Monday with gusts up to 60 mph in the forecast.