The Anchorage alcohol tax failed, but supporters are considering another round 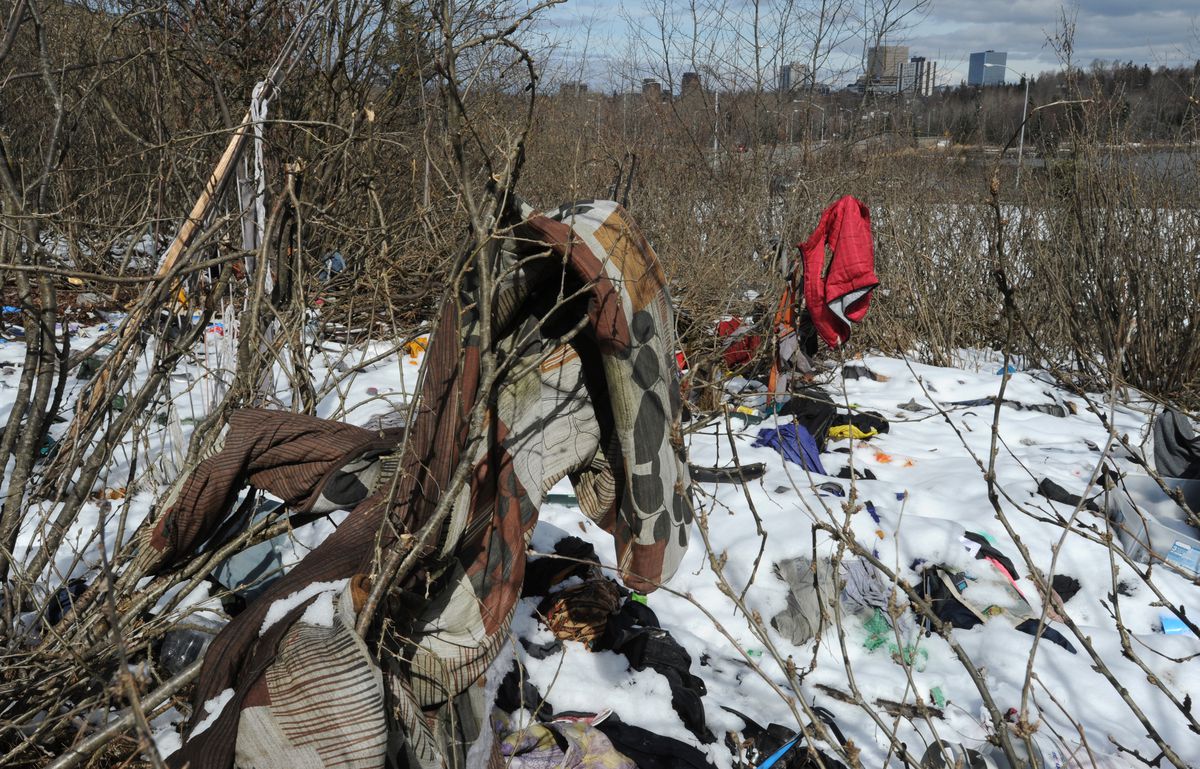 Items hang in the brush at a homeless camp near Minnesota Drive on Tuesday, April 23, 2019. (Bill Roth / ADN)

Items hang in the brush at a homeless camp near Minnesota Drive on Tuesday, April 23, 2019. (Bill Roth / ADN)

A proposed alcohol tax meant to fund programs that fight chronic homelessness failed in the city election earlier this month, but some Anchorage Assembly members and the mayor are discussing the possibility of putting a similar tax on the ballot again if other revenue streams can’t be found.

“The battle is not over,” said Christopher Constant, an Assembly member who represents downtown. “We have to figure this thing out.”

The discussions come as the city is looking for new ways to deal with homelessness — in particular, homeless camps, which have spurred public outcry. The threat of reduced funding from the state because of the current budget situation as well as a proposal to shrink Medicaid funding have added urgency. The alcohol industry opposed the tax, but Alaska CHARR, the Alaska Cabaret, Hotel, Restaurant and Retailers Association, said members are willing to be involved in finding non-tax solutions.

The 5% retail sales tax, which would have increased the price of an $8 six-pack of beer to $8.40, was projected to raise between $11 million and $15 million annually. It failed with roughly 53% of voters opposed but, Constant said, there is support on the Assembly to revisit the tax next year. The public needs a clearer idea of what its taxes pay for, he said. Another campaign could be more strategic and raise more money.

“I think we’ll do a better job of explaining,” he said.

The anti-tax campaign was funded by CHARR members and beer giants Anheuser-Busch and MillerCoors. It outspent the pro-tax camp by almost 10 times, spending at least $300,000, according to the latest available campaign spending reports. The pro-tax campaign was supported by Recover Alaska, a group that seeks to reduce harm caused by alcohol, as well as the liquor retailer Brown Jug.

“The smoking ban took 10 years,” said Tiffany Hall, Recover Alaska’s executive director. “We didn’t win it, but we did get an incredible percentage of the vote for what we spent.”

[Budweiser, Miller and other major companies jump into campaign against Anchorage alcohol tax]

Mayor Ethan Berkowitz, who supported the tax, said he met Monday with Alaska CHARR to look at ways to work together before moving into another tax discussion.

“The liquor industry has an opportunity to come forward and come up with a solution,” he said. “What are they willing to do in support of solving a problem that their industry helps create?”

Sarah Oates, president and CEO of CHARR, said no specific plans came out of the meeting. Her members are interested in fundraisers and participating in homeless camp abatement, she said.

“These are obviously important issues, they affect the entire community and they affect our membership, both professionally and personally,” she said.

“I think the community has made it clear they are not interested in a tax," she said. “I hope we can work on a different approach and find different solutions.”

Berkowitz said he was reaching out to the national companies that helped fight the tax. His administration is also beginning to look at a new tax proposal, including the possibility of a sales tax on alcohol wholesalers that might also give the city the opportunity to sell bonds, he said. That would mean the amount of the tax could change depending on the bonds voters approve.

Members of the pro-tax camp said the public had a poor understanding of what the tax would have paid for. The largest portion of the money was designated to support the development of the Alaska Center for Treatment, said Nancy Burke, the city’s housing and homeless services coordinator.

The city is short on treatment beds, and the reduction of beds at the Alaska Psychiatric Institute has increased that pressure. The proposed treatment program would be have been located on the soon-to-be-vacant site of the Clitheroe substance abuse treatment program, near the Anchorage airport. The center would have been targeted toward a large, difficult-to-serve share of the chronically homeless population: people who have both addiction and mental illness or cognitive issues, like dementia or traumatic brain injury. It would have been large, and built to offer several kinds of treatment as well as transitional housing, she said. The project is on hold for now, and Burke was concerned about how to find treatment for patients with mental health and substance abuse issues, especially with the potential of less support from the state and Medicaid reductions.

“I don’t know what the state will do for that population. It won’t be good,” she said.

The tax would also have supported expanding the city’s mobile intervention team, which brings social workers into homeless camps and shelters, connecting the homeless to services they need. Such efforts have shown success in keeping campers from bouncing between shelters, jails, emergency rooms and new camps.

“It’s really one of the best things we’ve done,” she said.

The proposed tax funding would also have allowed the city to purchase more storage for the property of homeless people, Burke said. Storage is a simple, surprisingly important solution, Burke said. Having storage brings a sense of stability and gives people a place to keep hygiene products and clean clothes.

“People down at Brother Francis (Shelter) have to carry everything they have. It’s really hard for people to get to doctors’ appointments or do anything because they just have everything with them,” she said.

There is no plan for how to fund that kind of storage at this time, she said. The tax funding would also have supported additional shelter beds.

Constant said he looked at how residents voted on the tax by precinct and noticed the people in the areas with the most visible homeless problems supported the tax, he said.

“Those who are impacted know that we have to do something and they are willing,” he said. “Everybody is demanding solutions … it’s tough because nothing happens for free.”