Their daughter died while withdrawing from heroin in an Anchorage jail. They just won a wrongful-death claim against the state. 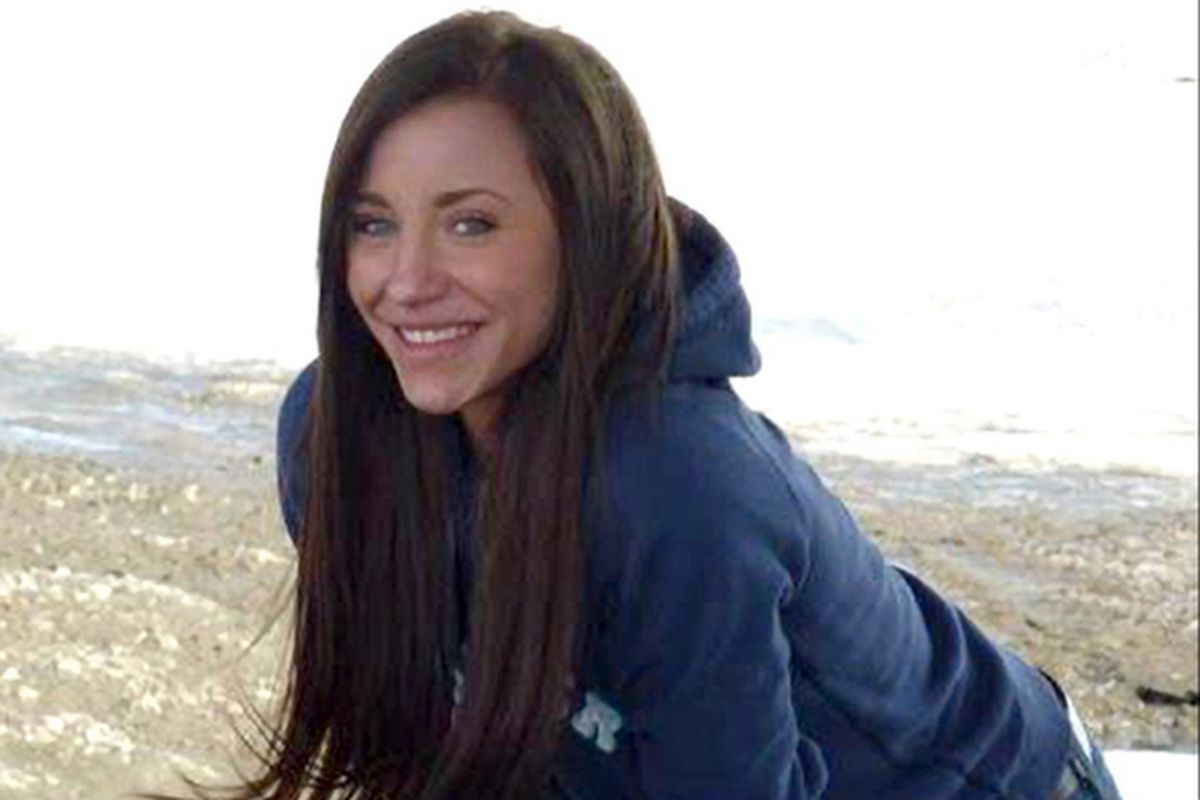 Kellsie Green in a photo on her Facebook page and taken in 2015. Relatives say Green died after she went through heroin withdrawal at the Anchorage jail. Her father filed a wrongful-death lawsuit against the Alaska Department of Corrections.

Kellsie Green in a photo on her Facebook page and taken in 2015. Relatives say Green died after she went through heroin withdrawal at the Anchorage jail. Her father filed a wrongful-death lawsuit against the Alaska Department of Corrections.

WASILLA — The video is grainy, but the image is clear: a young woman, eyes wide open, wheeled out of a jail cell on a gurney with her elbows bent, arms stiff in the air as if reaching out for something, fingers splayed.

The footage shows the lifeless body of 24-year-old Kellsie Green on the morning she died in January 2016, five days after she entered the Anchorage jail.

Alaska State Troopers arrested Green at her parents’ request. With few if any immediate options for drug detox in Alaska, they didn’t know what else to do with the little girl who used to hate needles who’d become a five-year heroin addict, had just stolen her mother’s gun and was on her way back home.

Instead of getting clean, the 80-pound woman with a 4-gram-a-day habit spent her last days vomiting and soiling herself — so dehydrated that she begged for IV fluids — before dying alone in a cell.

A lawsuit filed in March 2016 by her father, John Green, on behalf of her estate against the Alaska Department of Corrections was resolved this month: Both sides agreed to a wrongful-death judgment and a $400,000 award approved by a judge April 19.

But more important to Green, he says, he feels the state took responsibility for decisions that killed his daughter: not immediately starting medically supervised drug detoxification; not providing adequate IV fluids; and not responding to frequent calls for help from Kellsie’s cell while other inmates provided most of her aid.

The Department of Corrections is the state’s largest provider of drug and alcohol detox by default, a spokeswoman said. On any given day, DOC has about 40 inmates being monitored for withdrawal symptoms and an average of 10 per day on medically managed detox protocols.

[She died in the Anchorage jail detoxing from heroin. Her family wants answers.]

Green said he was willing to settle, rather than go to trial, because of the judgment agreement and because the state authorized the release of video, audio and hundreds of pages of depositions and reports that detail how the system failed his daughter.

Attorneys from the Alaska Department of Law worked with his attorney, Jason Skala, for months on the reams of documents and footage to redact the names of corrections officers and others.

The result is what Green hopes will be enough proof of a system-wide failure that Kellsie’s death prompts the state to rethink the way it handles inmates forced to detox in jail.

Kellsie Green would have been 28 last month. She lived a complicated life. She was raped at 14 and started using heroin a few years later, in 2011. She worked as a trained massage therapist and as a dancer at Fantasies on 5th Avenue. Her mother, Kathi Green, said she had a big heart and was her best friend. They got baptized together on Easter Sunday in 2015.

Kellsie Green didn’t have major troubles with the law. She was arrested en route to her mother’s house on Knik-Goose Bay Road after her parents called her in on a relatively minor warrant for not completing community service after driving on a revoked license.

Both parents say they were desperate to help her get off heroin. They’d tried shipping her off to a treatment program in Arizona, but Kellsie walked away after a few days. The only detox facility in Anchorage had a waiting period and Kellsie couldn’t be trusted to call in every day as required, John Green said. Jail was their last hope.

“Even today, this is what people are faced with for their family members that are suffering,” he said.

Kellsie at some point also somehow crossed paths with Bill Stoltze, at the time one of the most powerful politicians in the Alaska Legislature as a state senator and former House Finance Committee co-chair.

Stoltze was listed as a witness by both parties in the lawsuit but not deposed by either, Skala said.

The 57-year-old Chugiak lawmaker knew her daughter for more than a year, Kathi Green said.

The Greens believe Stoltze gave their daughter money, which she later used to buy drugs. Kellsie told her mother she thought Stoltze was stalking her when he showed up outside a Palmer courtroom after one of her court hearings. He didn’t come over to talk to them, Kathi Green said. She never met him.

Green said she doesn’t know what Stoltze’s motives were.

Stoltze resigned suddenly from the Senate in mid-April 2016, a few weeks after the Green wrongful-death suit was filed. Stoltze cited health problems — he has diabetes — as the reason for his resignation.

Stoltze did not return numerous requests for comment for this article. A family member of Stoltze’s didn’t recognize Kellsie’s name apart from news coverage of her death. A friend of Stoltze’s described Green and Stoltze as friends.

Lobbyist John Harris, a former House speaker and friend of Stoltze’s, said he didn’t recognize the name and would be surprised if Stoltze would show any kind of inclination to help someone with drug problems.

‘I wish he would have called’

Green was taken into custody by Anchorage police on the Glenn Highway at 7:15 a.m. Jan. 5, 2016, according to a timeline produced for the lawsuit. She was in possession of heroin and syringes.

Stoltze visited Green in jail the first evening she was there, according to visitor logs and surveillance video released through the wrongful-death claim.

Green called Stoltze from jail earlier in the day, according to an audio file of the almost nine-minute call. The two spoke in a familiar way. Stoltze sounded concerned at times, chiding Green for not finishing her community service.

Green several times asked Stoltze to pay her $2,200 bail. He deferred, saying a plumbing problem needed immediate attention. Then he made it clear he didn’t want to be associated with the payment.

“Well, I hate having my, you know, my name there on CourtView and everything on that stuff, you know what I mean?” he tells her, referring to the public court online database. “You’re listed as a poster there when you secure the bond.”

He offered to give her mother the bail money if Kellsie could reach her. She said no one was answering.

Kathi Green this week said a system she’d set up to accept calls from the jail didn’t work.

Stoltze never called her to ask about bail or tell her Kellsie was sick, Green said. “I wish he would have called.”

Green wasn’t put on special procedures for inmates withdrawing from drugs until her third day in jail, according to John Green and a timeline compiled for the lawsuit.

At the Anchorage jail that morning, Kellsie filled out paperwork indicating she’d last used heroin at 2 a.m. and checked a “yes” box next to the question “Do you have problems that occur after stopping the use of drugs or alcohol?” according to the lawsuit timeline.

She requested detox protocol on her second day at the jail, documents show.

She was jailed with two other inmates who helped her as she vomited and soiled herself, John Green said. Two days before she died, Kellsie said she was throwing up blood but jail staff said they found none.

Jail video the day before she died shows Green too weak to stand during roll call. She stumbles out of her cell to the end of a row of women, then slides to the floor holding her stomach. A correctional officer writes something down and walks past her and up some nearby stairs.

Another video shows her just after a shower, almost naked, collapse into a “boat” inmates use to sleep on the floor. Other inmates hurry over to get her settled and then drag her bed into her cell. Another inmate can be seen with a mop.

Less than six hours before her death, Green was moved into segregation “so she did not vomit on her cellmates or their property again,” according to an incident report filed by a shift commander. The commander voiced concerns as to whether she was safe alone in a cell during detox and was told she seemed less lethargic.

Green was found unresponsive and without a pulse around 9:30 a.m. Jan. 10, 2016, and, despite 50 minutes of CPR at the jail, was declared dead at Alaska Regional Hospital about an hour later.

Asked if jail medical staff followed the existing detox protocol with Green, a nurse deposed in the wrongful-death suit in August 2017 said, “I will have to say, no,” according to a transcript of the session. The standard protocol dictated an inmate’s vital signs be taken before each dosing of medication, “and that was not done.”

She also said medical staff were instructed to disregard parameters for a drug called clonidine because “it was the helpful medication” for withdrawal symptoms. Green’s medical forms included an instruction not to administer the drug if her diastolic blood pressure was below 100. Hers ranged from 69 to 80, records show.

The Greens are still seeking criminal charges against the jail staff who encountered their daughter. John Green said he’s meeting with a trooper next week.

Kathi Green, who works for the Matanuska-Susitna Borough School District, wants the correctional officers involved held accountable. She would be in jail, she said in a message, if she saw a student or teacher begging for help and vomiting blood “and I took them and put them in a closet and shut the door ... instead of calling 911."

“It was terrible what they did to her,” she said during an interview.

The Alaska Correctional Officers Association has disputed the story Green’s cellmates told about requests for help being ignored. A representative said correctional officers tried to get help from medical staff.

No inmate has died as a result of opiate detox since the new order set was instituted, Gallagher said.

The Greens want the state to improve the way Alaska’s jails handle detox and treatment for inmates who are in the pretrial system, not only to help prisoners but also to reduce crime.

“Instead of releasing them out, put them in rehab and try to help them instead of detoxing them and setting them free on the street,” Kathi Green said. “I would hope they have a better system. Because it is an epidemic.”