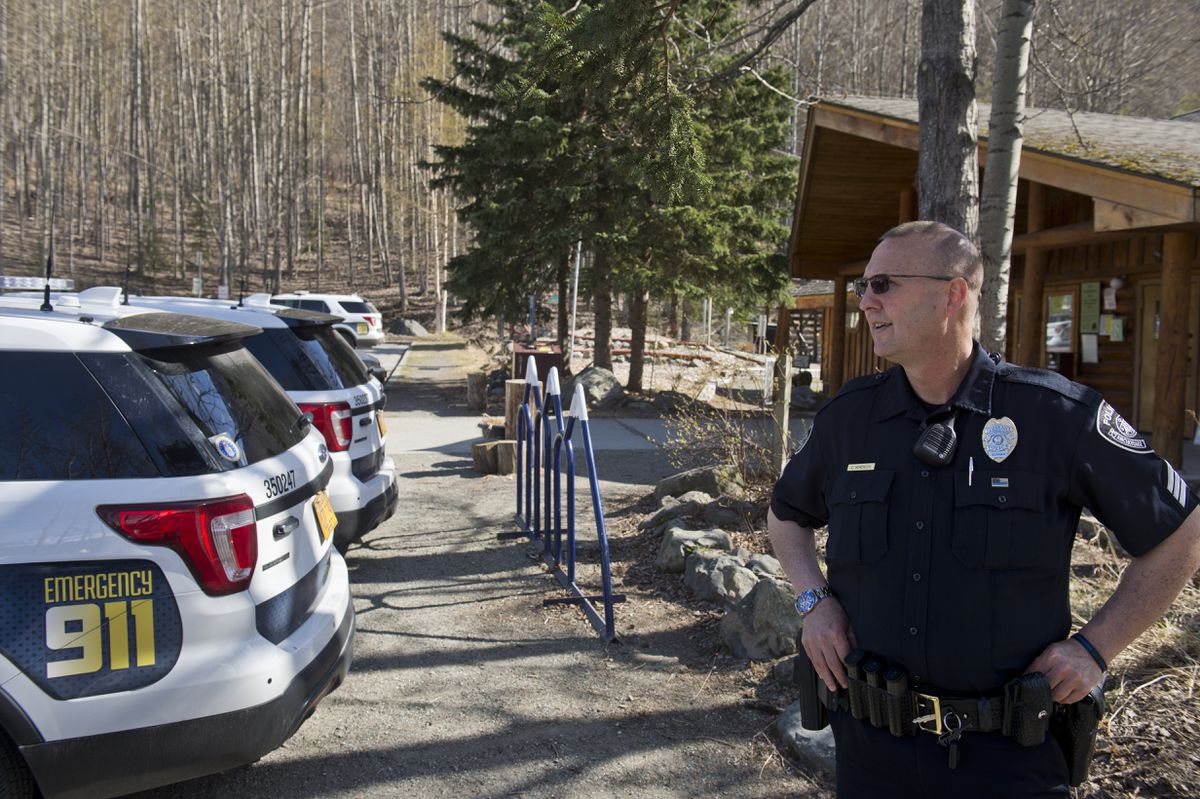 Anchorage Police Sgt. Cameron Hokenson said a search is underway for a hiker reported missing near the Eagle River Nature Center on May 1, 2019. (Marc Lester / ADN)

Anchorage Police Sgt. Cameron Hokenson said a search is underway for a hiker reported missing near the Eagle River Nature Center on May 1, 2019. (Marc Lester / ADN)

The man, 47-year-old Neil Guggenmos, was reported missing by his wife around 8:15 a.m. Wednesday, search officials said. Guggenmos’s wife said he told her he was going to the movie theater Tuesday night but never came home, according to APD Sgt. Cameron Hokenson.

On Wednesday morning, his wife checked the Eagle River Nature Center parking lot because he frequently hikes in the area, Hokenson said, and that was where she found his car.

“There’s nothing suspicious in it or anything — paid for a parking pass, even,” Hokenson said. “No notes to say self-harm or anything like that.”

Searchers were focusing on Echo Bend, an area at the far end of the nature center’s 6-mile Dew Mound Trail loop that Guggenmos was known to favor, he said.

After a full day of searching, though, they still hadn’t found any sign of him, troopers spokeswoman Megan Peters said.

Six people are out searching for the Guggenmos, and so far there is no indication of a bear attack, Hokenson said.

“We’ve not seen any bears, and nobody’s reported seeing any bears,” he said.

Troopers described Guggenmos as 6 feet tall and 260 pounds with brown hair and blue eyes. It’s unknown what he was wearing when he went missing, Peters said.

Police don’t know whether he had any survival gear with him, according to Hokenson.

Although Hokenson said the mostly bare trees make for a better sight line than searchers might have had in the summer, the troopers planned to deploy helicopters Wednesday, including one with infrared search cameras, to aid in the search.

No K9′s were involved in the search Wednesday, Hokenson said.

According to Eagle River Nature Center manager Laura Kruger, searchers were already at the center when she arrived at work at 9 a.m. Wednesday. She said she had no other details about the search.

Missing hikers are an infrequent occurrence at the nature center, Kruger said.

The center is at the end of Eagle River Road at the edge of Chugach State Park.

This is a developing story; check back for details.