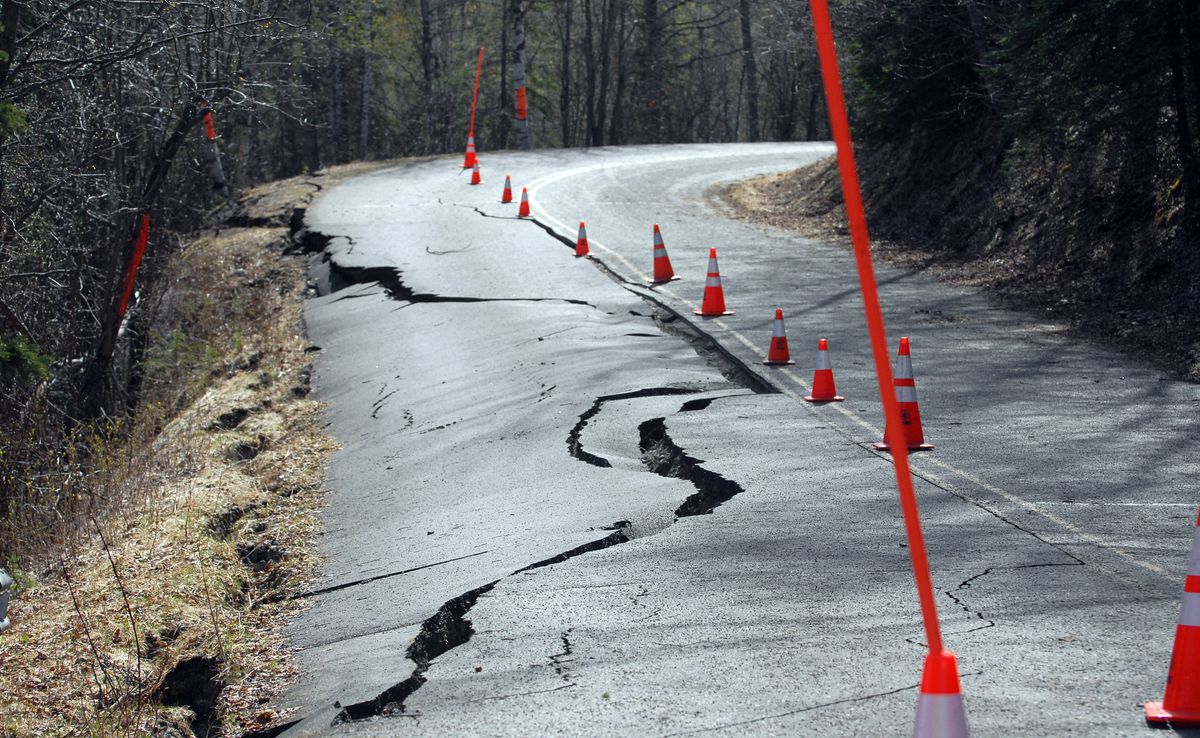 The road leading to the Eagle River Campground suffered extensive damage in the Nov. 30, 2018 earthquake. The road will need to be repaired and the campground will be closed until mid-June, according to state officials. (Matt Tunseth / Chugiak-Eagle River Star)

The road leading to the Eagle River Campground suffered extensive damage in the Nov. 30, 2018 earthquake. The road will need to be repaired and the campground will be closed until mid-June, according to state officials. (Matt Tunseth / Chugiak-Eagle River Star)

Last fall’s magnitude 7.1 earthquake has spoiled the plans of some springtime campers in Eagle River.

The popular Eagle River Campground will be closed until mid-June due to quake damage to the road leading to the riverside park, according to Chugach State Park superintendent Kurt Hensel.

“We’re just keeping it closed until we get it fixed,” Hensel said Wednesday.

The road leading to the campground suffered extensive damage in the quake, according to a prepared statement from the Department of Natural Resources.

“The earthquake left a large fissure in the road that provides the only access to the campground, located off Hiland Road in Eagle River,” the statement said.

Hensel said the Department of Natural Resources is responsible for fixing the road and the project will be out to bid soon.

“The roadbed needs to be tore up and replaced,” he said.

Dan McDonough, whose company Lifetime Adventures manages the 57-site campground for the state, said the spot is usually one of the first places campers can go in the spring.

“Usually we try to be the first campground to open, and we always open by the last week of April,” McDonough said.

The damage was discovered over the winter but state engineers didn’t know its full extent until the spring.

“As the engineering came in and the snow went away, it became more obvious” how bad the damage was, McDonough said.

The damaged section of road is heavily cracked along a roughly 100-yard section, with one lane entirely impassable. McDonough said the state considered leaving the road as a one-lane, but determined that would be unsafe and would only further damage the road.

He said the company will be contacting people who reserved sites in advance to issue refunds. Lifetime Adventures hadn’t been taking reservations through Memorial Day, he said, and the number of reserved spots “isn’t a huge impact.”

“More for the locals it’s an impact because it’s a favorite campground early in the season,” he said.

People can still walk into the campground, but there is no parking available at the site. Although the campground won’t be staffed while the road is being fixed, he said workers will be coming and going while the repairs are being made, and the company will also be making periodic checks on the area to make sure it’s ready for campers when the road is reopened.

“Our goal is to have it 100 percent ready to go so that the day they open the road it’ll be open and everything will be operational,” he said.