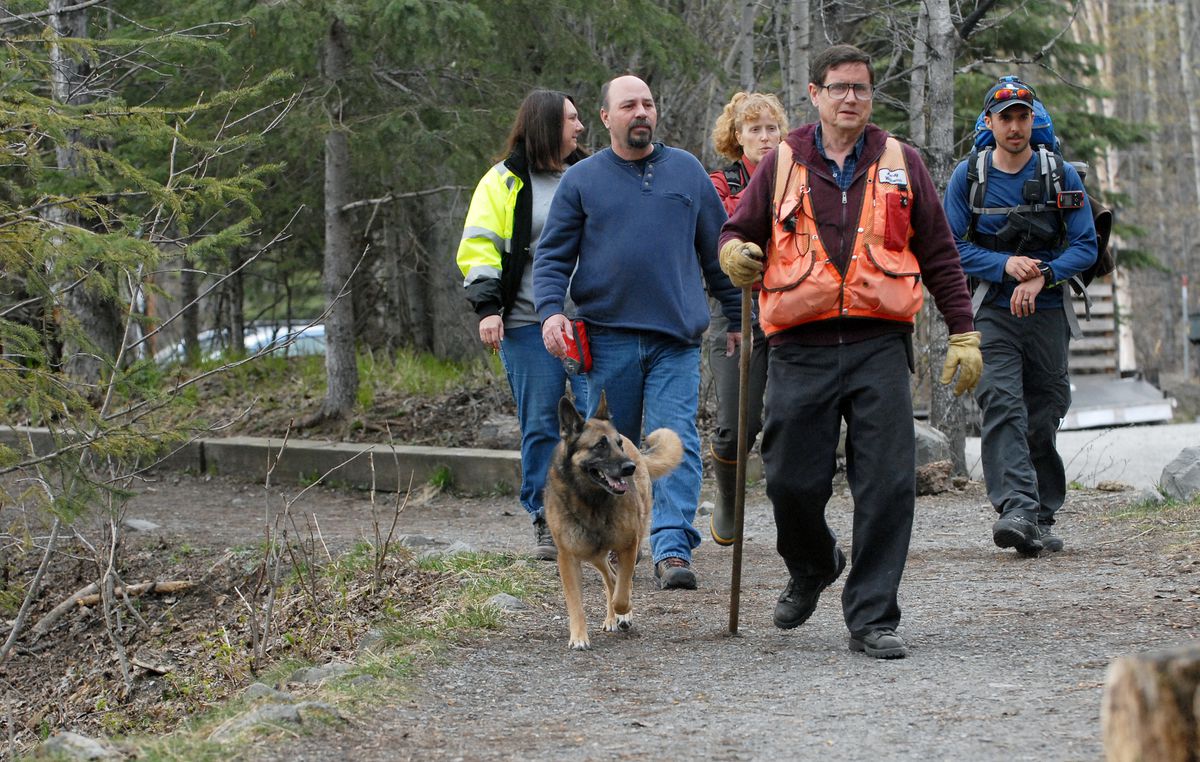 Searchers head out onto the trails at the Eagle River Nature Center while helping the search for missing hiker Neil Guggenmos on Wednesday, May 1, 2019. (Matt Tunseth / Chugiak-Eagle River Star)

Searchers head out onto the trails at the Eagle River Nature Center while helping the search for missing hiker Neil Guggenmos on Wednesday, May 1, 2019. (Matt Tunseth / Chugiak-Eagle River Star)

The body of a Palmer man missing since he told his wife he was going to a movie Tuesday night was found Wednesday evening in Chugach State Park near the Eagle River Nature Center.

Neil Guggenmos, 47, died from what appeared to be self-inflicted injuries, according to Alaska State Troopers.

Guggenmos was found just after 9 p.m. “well off a trail” about a mile and a half from the center, troopers spokeswoman Megan Peters said Thursday. The location was described as"challenging."

Guggenmos was reported missing Wednesday morning after his wife checked the nature center and found his car there, Anchorage police said. He was known to hike the popular network of trails leading from the center up Eagle River Valley.

All searchers were accounted for Wednesday night, troopers said. The number of people looking for Guggenmos wasn’t immediately available.

The search involved patrol and wildlife troopers, park rangers and police, all of whom responded Wednesday morning to the trailhead to search “easily accessible” trails, Peters said in an email. Park rangers and APD responded to the trailhead to begin search efforts. Helicopters were also used in the search. The Alaska Incident Management Team, Alaska Mountain Rescue Group, Anchorage Nordic Ski Patrol and Alaska Search and Rescue Dogs also participated.

The search-and-rescue-dog group had six people searching, including four handlers.

“The only really good thing we can say is that the search at least brought closure, so the family has answers,” said unit leader Amy Brock.

If you or someone you know are dealing with depression or a mental crisis, there are many options available to help. Here are a few easily accessible ones:

• In Anchorage, the Alaska Native Medical Center’s emergency room is open 24/7 and can help any Alaska Native or American Indian dealing with a mental crisis or grief. The hospital is located at 4315 Diplomacy Drive. You can also reach them by phone at 907-563-2662.

• For more information on the Alaska Suicide Prevention Council and suicide in Alaska, visit dhss.alaska.gov/suicideprevention.

• If you see someone sharing suicidal content on Facebook, you can anonymously report it by visiting facebook.com/help/contact/?id=305410456169423.

• If you see someone threatening suicide on Twitter, you can report it at help.twitter.com/forms/report_self_harm.

• For more information on the signs of suicide, visit afsp.org/preventing-suicide/suicide-warning-signs.