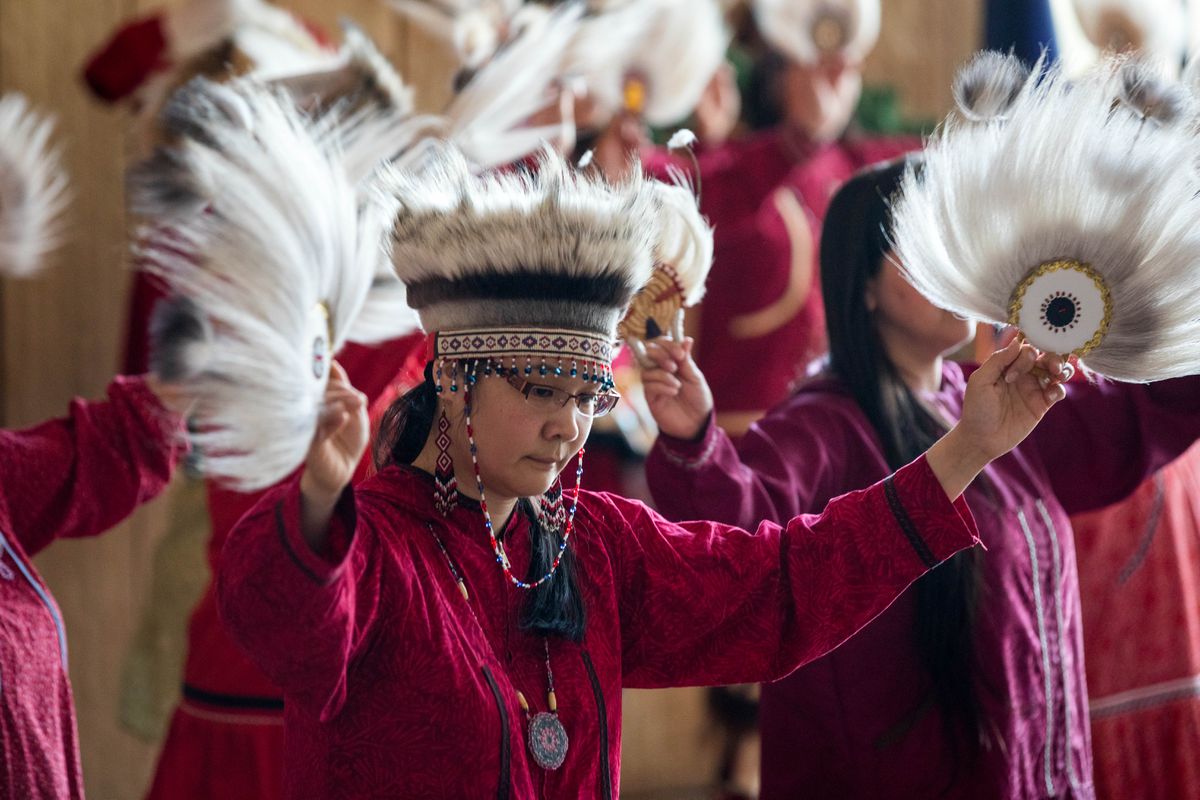 Sheila Lowe dances with the Acilquq Singers and Dancers on Saturday, May 4, 2019 at the Alaska Native Heritage Center. The dance was part of a Missing and Murdered Indigenous Women and Girls community gathering and Heartbeat of the Drums ceremony. (Loren Holmes / ADN)

Sheila Lowe dances with the Acilquq Singers and Dancers on Saturday, May 4, 2019 at the Alaska Native Heritage Center. The dance was part of a Missing and Murdered Indigenous Women and Girls community gathering and Heartbeat of the Drums ceremony. (Loren Holmes / ADN)

The list was five pages long. On it were written 191 names.

Each name represented an Alaska Native woman or girl who has either gone missing or been killed, and each one was read aloud at a Saturday remembrance for missing and murdered indigenous women at the Alaska Native Heritage Center.

Alaska has the fourth-highest number of missing and murdered indigenous women in the nation, according to a report from the Seattle-based Urban Indian Health Institute, and Anchorage has the third-highest number out of all the cities the study surveyed.

Reading the names aloud is one way the community can heal from the grief of that pervasive loss, said Charlene Apok, a researcher for the Southcentral Foundation. Apok, who is Iñupiaq, said in her culture, names are inextricably linked to souls — and that makes the Jane Does on the list particularly painful.

Apok attended the remembrance as a traditional healer. As the names were read, she embraced and, she said, gave good energy to name-readers who were too overwhelmed to continue down the list. Some of the names on the list were Apok’s own family members, including her mother, who died at the age of 39, Apok said.

Polly Andrews, who also works at the Southcentral Foundation, had a family member on the list as well — her great-aunt, whom she said she didn’t know about until recently.

Andrews said her great-aunt flew to Anchorage from from the Western Alaska village of Tuluksak for a medical trip almost 70 years ago. She was never heard from again, Andrews said.

Much of Andrews’ job involves helping people cope with pain like hers. On Saturday, she led what she called “healing and learning circles,” which she said are similar to support groups, for those who had come to remember their lost or missing loved ones. She leads similar groups at the Southcentral Foundation.

Then there was the music — the steady parade of dancers and singers that Kendra Kloster, the Tlingit executive director of Native Peoples Action, which organized the event, said was another way of working toward healing.

Underlying everything, though, were the drums, which Apok said many cultures believe represent the heartbeat of their people. The steady but deafening roar was the centerpiece of the event.

Even so, Kloster said there’s still work to be done — Saturday’s event was as much a rallying cry as it was a vigil. The little data that exists on missing and murdered Alaska Native women isn’t comprehensive, and advocates can’t convince the Legislature to address the problem without enough data to understand its scope, she said.

As far as what addressing the problem would look like, Kloster described a multifaceted solution that would combine greater investment in rural public safety with a stronger relationships between tribal governments and the federal and state governments. Legislation to that effect, she said, already exists in Washington state.

In the meantime, though, healers waited with burning sage, cleansing attendees as they walked out the door.