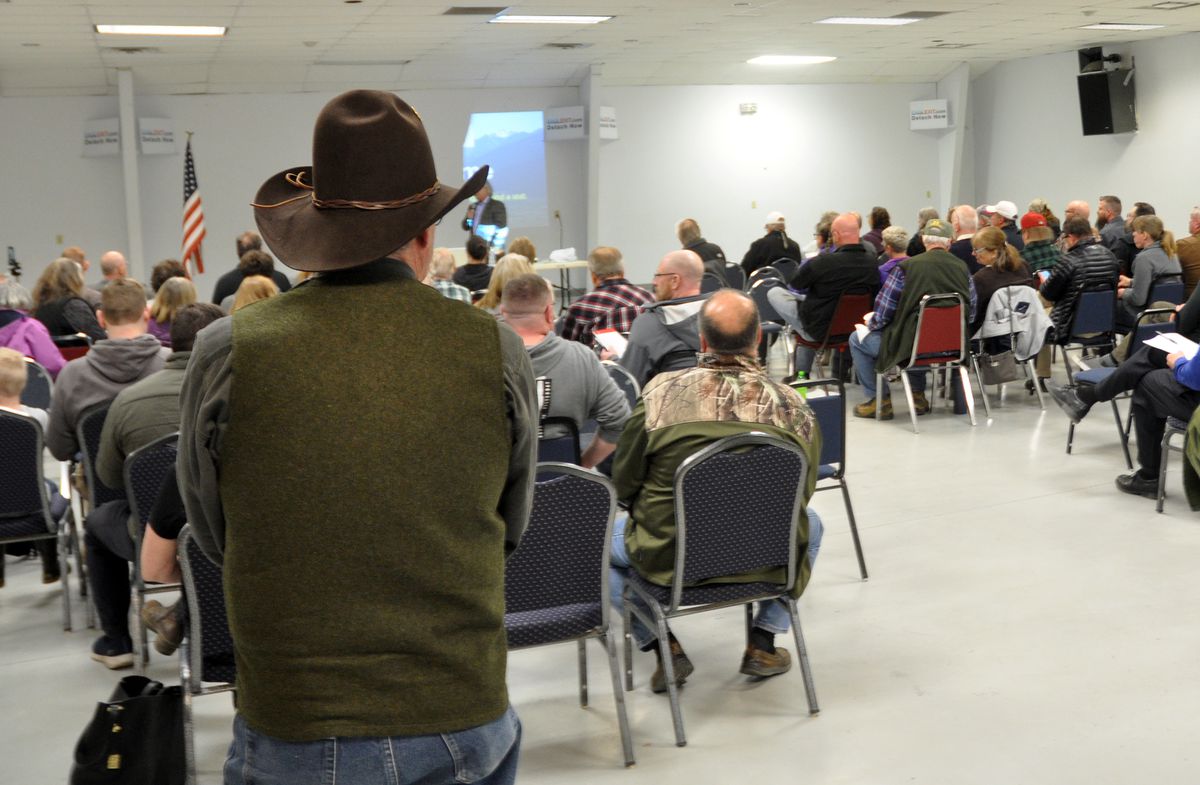 A movement by Chugiak-Eagle River residents hoping to detach their Assembly district from the Municipality of Anchorage and form their own government is gaining steam and support, including from a conservative nonprofit organization based in Texas.

More than 100 people turned out for an informational meeting Friday night at the Eagle River Lions Club by backers of “EaglExit,” a nascent effort to secede from the municipality. The turnout was so good, organizers immediately scheduled another meeting later this month.

The San Antonio-based Justice Foundation, a nonprofit that primarily advocates against abortion, is now taking donations on behalf of EaglExit. According to its foundation’s website, the organization’s mission is to “pray, litigate, educate and advocate for life, liberty and justice.”

According to its website, the foundation “represents clients free of charge in cases in the areas of limited government, free markets, private property, parental school choice, parental rights in education and enforcing laws to protect women’s health.”

At Friday’s meeting, Tavoliero told the crowd EaglExit was formed by like-minded citizens who believe Chugiak-Eagle River has a right to self determination.

“We came up with that idea obviously from Brexit, but more important, we like the idea of local self government, and by that I mean being able to determine what’s going on in your community and have a voice in that,” he said.

EaglExit backers say they need $100,000 to conduct a feasibility study for their proposal to create a separate municipality consisting of Eagle River, Chugiak, Peters Creek, Eklutna and Joint Base Elmendorf-Richardson. Once a feasibility study is complete, the group would like to make a proposal to the Local Boundary Commission before putting the issue before voters in Assembly District 2.

Tavoliero said the EaglExit group has so far spent between $5,000 and $10,000 -- all of which he said has been in the form of time and money donated by the group’s members.

“We’re all volunteers,” he said of the group, which provided pizza and snacks for the large crowd that showed up to Friday’s event.

Tavoliero is an Eagle River real estate broker and chair of the District 13 Republican Party. He was appointed by Gov. Mike Dunleavy to the Alaska Real Estate Commission in January, but his appointment was voted down by a 7-50 vote after he came under fire from legislators during a committee hearing in which Rep. Zack Fields, D-Anchorage, said he was “disturbed” by Tavoliero’s social media posts, which Fields said espoused violence against Muslims.

Collins is a former legislative aide for Rep. Dan Saddler and the owner of Professional Transcripts; Banfield is the co-owner of Eagle River Trustworthy Hardware; DeVore owns Guaranteed Services, an Eagle River contracting company; Williams is a U.S. Army veteran who recently graduated from Wayland Baptist University with a degree in banking and finance; and Westveer is a U.S. Air Force survival, evasion, resistance and escape (SEER) specialist with the Alaska Air National Guard’s 212th Rescue Squadron.

“I do not believe they understand the needs of District 2,” said Tavoliero, who unveiled a survey the group conducted on Facebook that showed a large majority of respondents backing a separate local government for the area.

EaglExit supporters believe in creating a “pro-business” climate to spur new investment in the area, building a “smaller and more accountable” school district, taking local control of public safety and having more say over how taxes are spent. Some backers of separation also believe the new city would be able to provide services at a better value, but a 2007 study found the opposite to be the case -- taxes would have to increase significantly in Chugiak-Eagle River to keep the same level of services, wrote economists from Northern Economics.

Property tax rates in the municipality are based on the services people receive in their neighborhood -- for example, many Chugiak-Eagle River residents pay more for their own Parks and Recreation and Road Maintenance departments. Taxes in some parts of the area are higher than elsewhere in the muni but lower than others, ranging from a high of 16.06 mills in downtown Eagle River to 12.11 mills near the Eagle River Nature Center. The highest mill rate in the municipality is in the Glen Alps district (16.5 mills) and the lowest is in the Rainbow/Indian area (7.34 mills).

Tavoliero characterized the 2007 study as “inconclusive” during Friday’s meeting. However, one of its authors, economist Jonathan King, said the study found Chugiak-Eagle River was in fact being subsidized by the rest of the municipality.

“It didn’t pay for the services it got,” King wrote in an email.

Unfortunately for backers of EaglExit, Chugiak-Eagle River is primarily residential, King said, meaning its tax base is low compared to the municipality as whole.

Tavoliero said things may have changed since 2007, and pointed to the Tikahtnu Commons shopping development in East Anchorage as a potential source of revenue for the proposed municipality. In addition to Chugiak-Eagle River, District 2 also includes Joint Base Elmendorf-Richardson and a small sliver of East Anchorage. Tavoliero also noted there are valuable properties within the boundaries of the new proposed municipality, such as the Anchorage Regional Landfill and the Eklutna Dam.

Kendall said the new city might not be able to provide the same services, but the tradeoff for local control might be worth the cost.

Some residents also brought up the issue of municipal bond packages, which they feel typically benefit Anchorage more than Chugiak-Eagle River.

But locals actually received an outsized benefit in the most recent municipal election, where voters approved a $59 million school bond of which more than a quarter -- about $15.5 million -- was earmarked specifically for repairs to Chugiak-Eagle River schools. Several schools in the area suffered heavy damage in the Nov. 30 earthquake and need millions in repairs.

According to a note on the EaglExit website, the Chugiak-Eagle River group is “A project of the Justice Foundation,” which is based in Texas.

Other projects of the Justice Foundation include the Center Against Forced Abortions and the anti-abortion websites Beyond the Dark Valley, Operation Outcry and The Moral Outcry. On May 3, the group announced the upcoming launch of “The National Safe Haven & Forced Abortion Public Awareness Campaign.”

Though its main focus is opposing abortion, the Justice Foundation also supports a variety of conservative causes such as school choice. The Justice Foundation’s lead counsel is Clayton Trotter, a UAA professor who moved to Alaska shortly after an unsuccessful run for U.S. Congress in 2010. Trotter spoke on behalf of the Justice Foundation during Friday’s EaglExit meeting and said the two groups’ missions are closely aligned.

“We are 100% behind you guys,” said Trotter, who teaches business law at UAA. “I’m not saying I will practice law in Alaska because I don’t do that. But we will do everything we can to assist you in any way we can because this is what our foundation was established to do -- to support and defend those institutions in America that are what make America great.”

Tavoliero said money donated to the Justice Foundation on behalf of EaglExit will go directly to the Chugiak-Eagle River group, with the Texas group acting “strictly as a pass-through." He said joining forces with the already-established nonprofit was a way to allow EaglExit supporters to donate tax-free immediately, and noted the Justice Foundation “can take care of all the accounting and bookkeeping functions.”

Many questions remain about EaglExit, ranging from constitutionality to cost. A previous effort at detachment in 1974-75 failed after it was ruled unconstitutional by the Alaska Supreme Court.

Blatchford said the group would face “a difficult fight” in trying to secede from Anchorage, but the UAA professor noted the Alaska Constitution does endorse “maximum local autonomy.”

However, he also reminded the crowd detaching from the municipality wouldn’t necessarily mean they’d be free of bureaucracy.

“You have to have a government,” he said.

EaglExit members admit the process of untangling assets between the two municipalities would be complicated, but say they’re hopeful a feasibility study can point them in the right direction.

“We don’t have all the answers yet,” Westveer told the crowd.

That didn’t seem to matter to many in the audience, many of whom left Friday’s event by tossing $10, $20 and $50 bills into a basket set up near the door while grabbing from a stack of campaign yard signs the group had printed with its EaglExit logo and “Detach Now” slogan.

The group’s next informational meeting will be May 16 at 7 p.m. at the Chugiak-Eagle River Senior Center.

Among those who donated was Eagle River’s Rick Oleniczak, who admitted detachment would be an uphill battle but thinks it’s one worth fighting.

“It at least needs to be looked at,” he said.

Eagle River’s Jason Rampton said the area has always dreamed of leaving the municipality, and believes the newest effort is worthwhile even if it’s not cheap.

“Even if it costs us more in the beginning, in the long run it’s going to be a lot less,” he said.