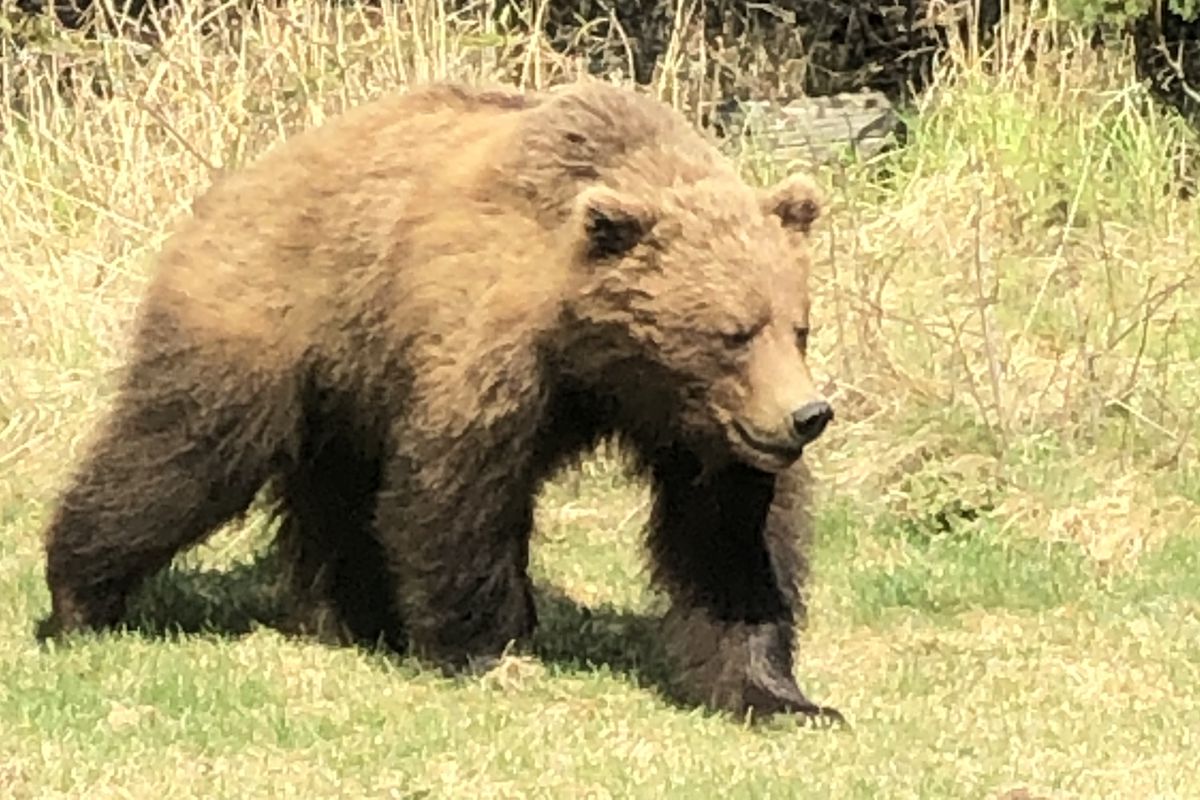 A brown bear was making its way through an Anchorage Hillside neighborhood near Elmore Road and Leyden Road, May 6, 2019. (Photo by April Cooley)

A brown bear was making its way through an Anchorage Hillside neighborhood near Elmore Road and Leyden Road, May 6, 2019. (Photo by April Cooley)

State biologists shot and killed a brown bear in an Anchorage Hillside neighborhood Monday night after reports the animal had tried to get into a chicken pen and had shown no fear of people, according to the Alaska Department of Fish and Game.

It’s the first bear the state agency has killed in the Municipality of Anchorage this year, said Fish and Game spokesman Ken Marsh.

Reports of Anchorage bears started trickling into Fish and Game last month, as the snow melted and the city entered spring. The number of reports increased in the first week of May, Marsh said.

Over several days in May, Fish and Game received reports of the aggressive brown bear in South Anchorage, Marsh said. The bear tried to get into someone’s chicken pen and it wasn’t easily scared away.

Fish and Game believes the brown bear killed this week was also the one captured in a video circulating on social media that shows the animal lunging underneath a guardrail toward a car.

“It was just showing all the signs of a brown bear that’s becoming habituated to people in a neighborhood,” Marsh said. “It was getting very brazen.”

While there are brown bears in Anchorage, most of the time they stay out of densely-populated areas, Marsh said, and Fish and Game generally won’t hear about them unless they show up on footage from a home security camera or are hit by a car.

“They’re pretty good at being elusive and staying out of sight,” Marsh said.

When a brown bear does wander into a neighborhood, it often prompts heightened concern from Fish and Game officials, he said. Compared to black bears, brown bears are more likely to aggressively defend a food source such as a moose carcass or unsecured trash.

Fish and Game killed the bear around 8 p.m. or 9 p.m. Monday in a neighborhood near the intersection of Huffman Road and Elmore Road, he said. The bear was a sub-adult, likely around age 2 or 3.

The bear’s hide and skull were salvaged and will either be sold at the annual State Hide and Horn Auction at Fur Rendezvous or donated to an education program, according to Fish and Game.

By Wednesday, the brown bear remained the only bear shot and killed by Fish and Game in the municipality so far this year, Marsh said.

The agency also had yet to get a report this year of anyone killing a bear in the area under defense of life and property laws, he said. Fish and Game keeps record of those bear kills, as well as bears killed by police, park rangers and wildlife biologists, like the brown bear Monday night.

In 2018, the total number of bears killed in the municipality by agencies and citizens in defense of life or property reached 41 — 27 black bears and 14 brown bears, according to Fish and Game. That’s seven more bears than in 2017 and among the highest totals ever recorded within the municipality, which includes Chugiak, Girdwood, Eagle River and Eklutna.

Meanwhile, Anchorage is about to enter calving season.

Newborn moose will start to appear in the municipality over the next few weeks, with calving season peaking around May 25 and going into early June, Marsh said. Calving season can also draw bears to the area.

“Black bear and brown bear alike will be looking for moose calves,” Marsh said. “Unfortunately that does sometime bring them around homes or neighborhoods because that’s where the moose hang out too.”

Marsh cautioned people to give cow moose with calves plenty of space. Cow moose are very protective of their young, he said. Since newborn calves can’t run from pets or people on bicycles, cow moose are likely to stand their ground even if they hear you coming down the trail, he said.

If you come across a bear protecting a moose kill, stay away. Contact Fish and Game at 907-267-2257 or submit a report on the agency’s website, Marsh said. If it’s an immediate safety threat, call 911.