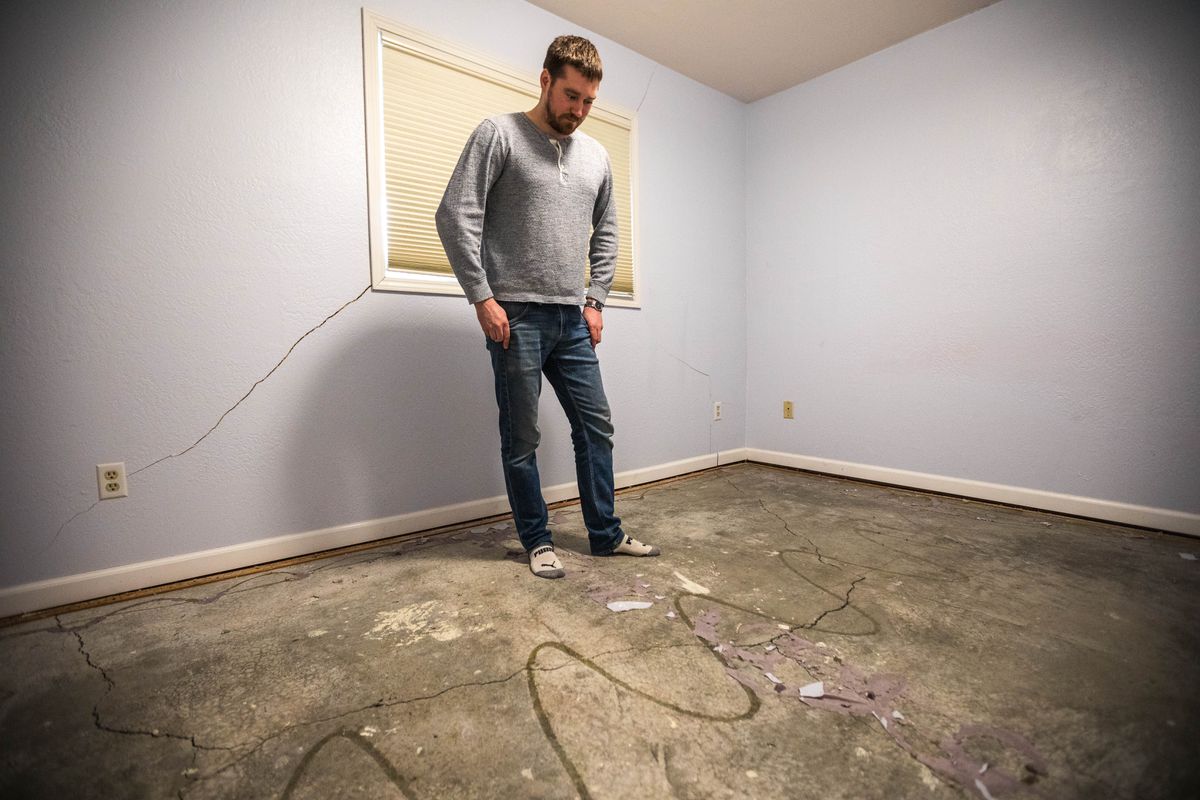 Ryan Manzek, photographed on Friday, March 1, 2019, pulled up carpet in the basement of his Sand Lake home to find substantial settling of his foundation after the Nov. 30 earthquake. (Loren Holmes / ADN)

Ryan Manzek, photographed on Friday, March 1, 2019, pulled up carpet in the basement of his Sand Lake home to find substantial settling of his foundation after the Nov. 30 earthquake. (Loren Holmes / ADN)

The reversal came amid mounting pressure from Alaska’s U.S. senators, local officials and homeowners, who said initial payouts weren’t taking into account winter conditions and the type of damage that occurred in the Nov. 30 earthquake. The larger payouts come as a financial boon to dozens of homeowners who were facing serious debt, if not bankruptcy or foreclosure, to fix sunken and cracked foundations.

The deadline to register with FEMA is May 31. Those who have already received awards can appeal again and provide a contractor’s estimate for foundation damage, FEMA officials say.

Some homeowners are also hoping to get state law changed to open up additional aid.

Ryan Manzek, whose Sand Lake home sank several inches, initially got $6,000 in FEMA aid after two appeals. His contractor’s estimate showed more than $200,000 in damage. He was told his only other option was a loan through the U.S. Small Business Administration.

[For some Alaskans struggling with earthquake losses, government aid falls short of expectations]

But in mid-April, Manzek got a phone call from FEMA: His award was being bumped up to about $35,000, the maximum possible. The official told him FEMA had changed its policy, for the Alaska earthquake only, to cover foundation damage and ground movement, or liquefaction, Manzek said.

He soon learned he wasn’t the only one getting the call.

“Everyone in my neighborhood started blowing up,” Manzek said. “We all started getting full payouts.”

About 50 homeowners have received maximum payouts in recent weeks, according to Jack Heesch, a spokesman with FEMA in Alaska. Until then, the number was just four.

Homeowners should take a second look at foundations and register with FEMA before the May 31 deadline if they see damage, Heesch said. He also encouraged homeowners to appeal a FEMA determination if they spot damage not previously seen, or appeal a previous FEMA grant if it was too small to cover damages and below the maximum award of $34,900.

Heesch said each disaster presents specific challenges and it isn’t unusual for FEMA to adjust its policies in response.

Earlier this year, Heesch and other officials insisted maximum payouts were extremely rare. They stressed FEMA aid was not a substitute for earthquake insurance -- which is relatively uncommon in Alaska -- and was only meant to get homeowners back on their feet. They suggested a cracked foundation didn’t stop a person from living in the home, and the federal money was aimed at making it “safe and habitable.”

But homeowners used the agency’s own guidelines to push back. Numerous homeowners with low FEMA awards were given “yellow tag” notices by city engineers. A yellow tag, often based on foundation damage, meant the home was unsafe for long-term habitation, city officials said.

Sullivan said in a Wednesday phone interview that ever since the earthquake, he’d been making the case to President Donald Trump and other top-ranking officials that Alaska needed full financial support. He had toured the homes of constituents and saw significant damage.

But as spring approached, Sullivan started to hear the complaints about FEMA payouts. The consistently low aid amounts, when compared to contractor estimates, “borderlined on an insult,” he said.

On March 26, Sullivan spoke on the phone with Peter Gaynor, the acting administrator of FEMA. He said he pressed Gaynor on the reasons for the low payouts, even though the federal government had enough money to pay more.

Homeowners described FEMA inspectors as friendly but unfamiliar with earthquake damage. Dean Cannon, a Jewel Lake homeowner whose house sank several inches, said his inspector referred to “the storm” when discussing damage and refused to enter the crawl space to inspect the foundation, though that was where the majority of the damage occurred.

On April 16, Gaynor wrote Sullivan a letter. FEMA awards were falling far below contractor estimates because of the “level of visibility” of foundation damage and soil movement, Gaynor wrote. He promised FEMA would start considering applicants with foundation-related damage for additional aid.

Shortly after, Manzek got the phone call from FEMA. He started to hear similar news from other neighbors.

Quinn-Davidson, the assemblywoman, lives near Lake Hood and discovered she had serious foundation damage in her own home after her trip to D.C. She said she and her wife, Stephanie, who was the one working directly with FEMA, were at first denied any aid. While it wasn’t a factor in her own efforts, Quinn-Davidson said, she and Stephanie were awarded a full payout in April following the policy change.

In this case, various levels of government came together to work for citizens, Quinn-Davidson said.

“I hoped if we kept pushing, and working together, that we would make some progress,” Quinn-Davidson said. “And I think we did, which is really cool.”

While some homeowners got help, others are still waiting. Leslie Dickson, whose duplex not far from Quinn-Davidson’s home suffered serious foundation damage, said she was denied based on the other half of her duplex being a rental. She said she’s in the middle of revising contractor estimates to cover only the part of the duplex that she lives in.

Dickson is one of a few dozen members of a Facebook group for homeowners with serious earthquake damage. So far, more than half the members seem to be getting the extra relief, Dickson said.

Meanwhile, a separate push has been underway to remove procedural restrictions on the state’s pool of disaster aid. State law currently says Alaska residents have to exhaust federal options before being eligible for state assistance and also can’t exceed the federal amount. Those facts were not clear until after FEMA began working in Alaska, officials say.

Additional money from the state would help even more, to cover between $60,000 and $80,000 in damage, he said. The state’s disaster relief fund offers up to about $18,000 for individuals, but Cannon no longer qualifies for the state money because he received the full FEMA payout, per state law.

“We’re trying, for people who are maxing out on FEMA, to make state aid still available,” Claman said in a Wednesday interview.

That battle is likely to roll into next year. In the meantime, homeowners who got more FEMA money are getting ready to make repairs.

Manzek, in Sand Lake, was preparing to lift his home this month to start fixing his sunken, cracked foundation.

Residents and business owners with damage can also apply for the federal assistance by registering online at DisasterAssistance.gov, visiting a disaster recovery center from the list at fema.gov/drc, or calling 1-800-621-FEMA (3362) or 1-800-462-7585 (TTY) for the hearing and speech impaired.