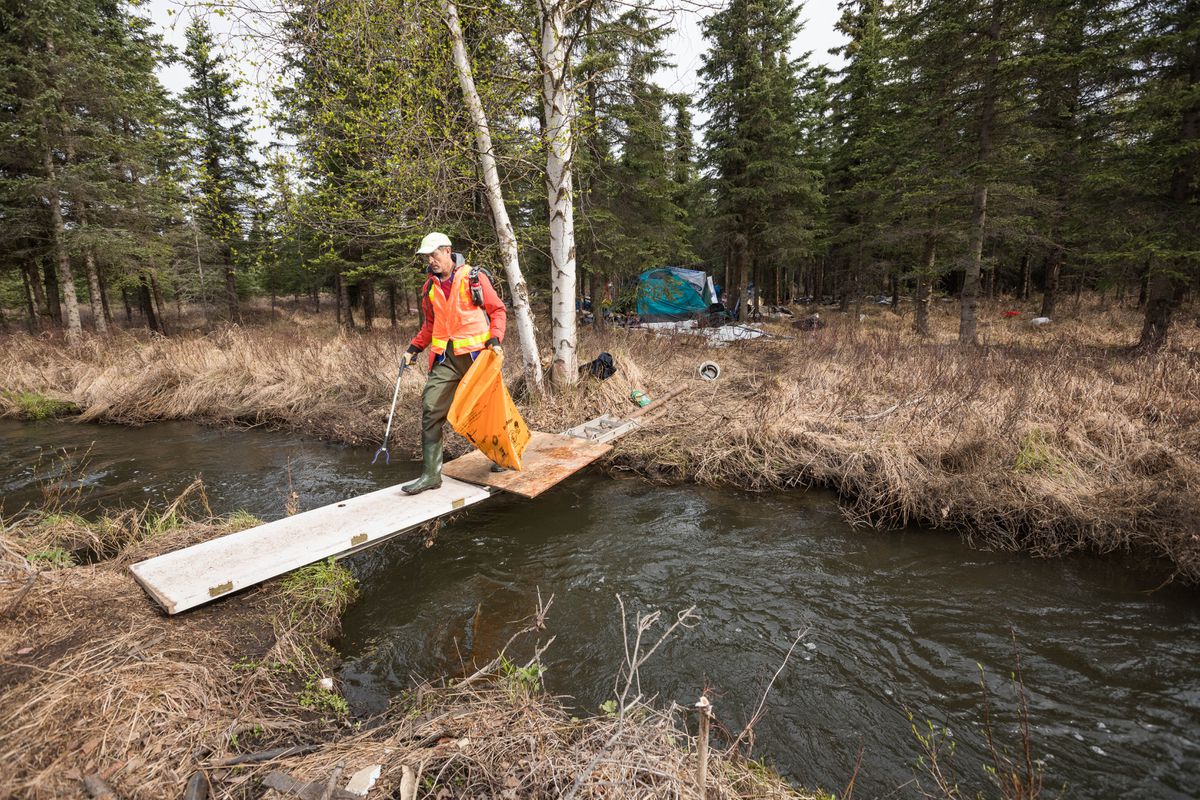 David Evans crosses a makeshift bridge over Chester Creek near a homeless camp on Saturday, May 11, 2019 during the annual citywide creek cleanup event. The effort was organized in 1984 by then-mayor Tony Knowles, according to the Anchorage Waterways Council. (Loren Holmes / ADN)

David Evans crosses a makeshift bridge over Chester Creek near a homeless camp on Saturday, May 11, 2019 during the annual citywide creek cleanup event. The effort was organized in 1984 by then-mayor Tony Knowles, according to the Anchorage Waterways Council. (Loren Holmes / ADN)

It was difficult to say whether the homeless encampment was still occupied. The pile of supplies, nestled in the leaves along Anchorage’s Chester Creek greenbelt, was partially obscured by a pink blanket.

Adam McCullough studied the cache — which contained, among other things, food containers, a propane tank, a box of ramen noodles, and a scattering of batteries — before deciding, “I think we should clean it up."

McCullough, who serves on board of the Anchorage Waterways Council, cleans a portion of Chester Creek every year alongside a team of volunteers from his company, Quantum Spatial.

Their effort is part of the council’s annual Creek Cleanup, which Cherie Northon, the council’s executive director, estimated collects between four and five tons of trash each year from waterways across the city.

However, it’s not just litter that creek cleanup volunteers have to worry about anymore. Within the last two years, homeless camps have become a huge problem for the Waterways Council, Northon said.

“It is definitely exploding,” she said.

Chester Creek, which Northon called the “nucleus” of homeless encampments, is the worst waterway in Anchorage as far as litter, she said — and Campbell Creek isn’t far behind, largely due to the camps.

The consequences, she said, are that volunteers are running into far more human feces and syringes along their cleanup routes than they used to. That means creek cleanup has started to become a safety hazard, she said — especially since many of the volunteers are children.

The Waterways Council advises its volunteers not to approach homeless camps and to give them a wide berth, even if that means not cleaning the creek nearby, Northon said. Abandoned camps are a little trickier.

“They kind of say use your best judgment, and if you don’t feel safe definitely don’t touch anything,” McCullough said.

It was hard to tell whether the camp McCullough found was still inhabited, but the volunteers opted to break it down, stuffing smaller items into trash bags and and dragging larger items, like a makeshift trailer made from a bicycle wheel and a deteriorating piece of roller luggage, out onto the trail, where a small stockpile was forming.

Downstream from the abandoned encampment, though, there was a much larger camp — almost a tent city — and it was clearly inhabited. A column of smoke rose from the middle, and a makeshift bridge had been laid across the creek. McCullough snapped photos on his phone before moving on.

The municipality keeps track of homeless camps through an online reporting system, but because that data is not made public, it’s hard to know exactly how many camps there are. Northon estimated there were at least a dozen along Chester Creek between Lake Otis Parkway and the Seward Highway, where the Quantum Spatial team cleaned Saturday.

The problem has become especially bad over the past two years — so much that Northon said she wouldn’t be above ceasing the creek cleanup program entirely.

“I think people’s safety is above and beyond what happens in the creeks,” she said.

That option is part of a larger discussion the organization is having about the safety of its volunteers, Northon said, though she noted that the increase in safety hazards hasn’t kept people from volunteering.

The Quantum Spatial team has been coming out every spring for the past five years, armed with waders or Xtra-Tuffs, drag hooks, and a slew of trash bags, according to McCullough. One volunteer, company senior vice president and general manager Bob Hickey, flies in from Philadelphia every year to help with the cleanup.

“I enjoy the opportunity to be able to take the time to give something back to Anchorage,” Hickey said.