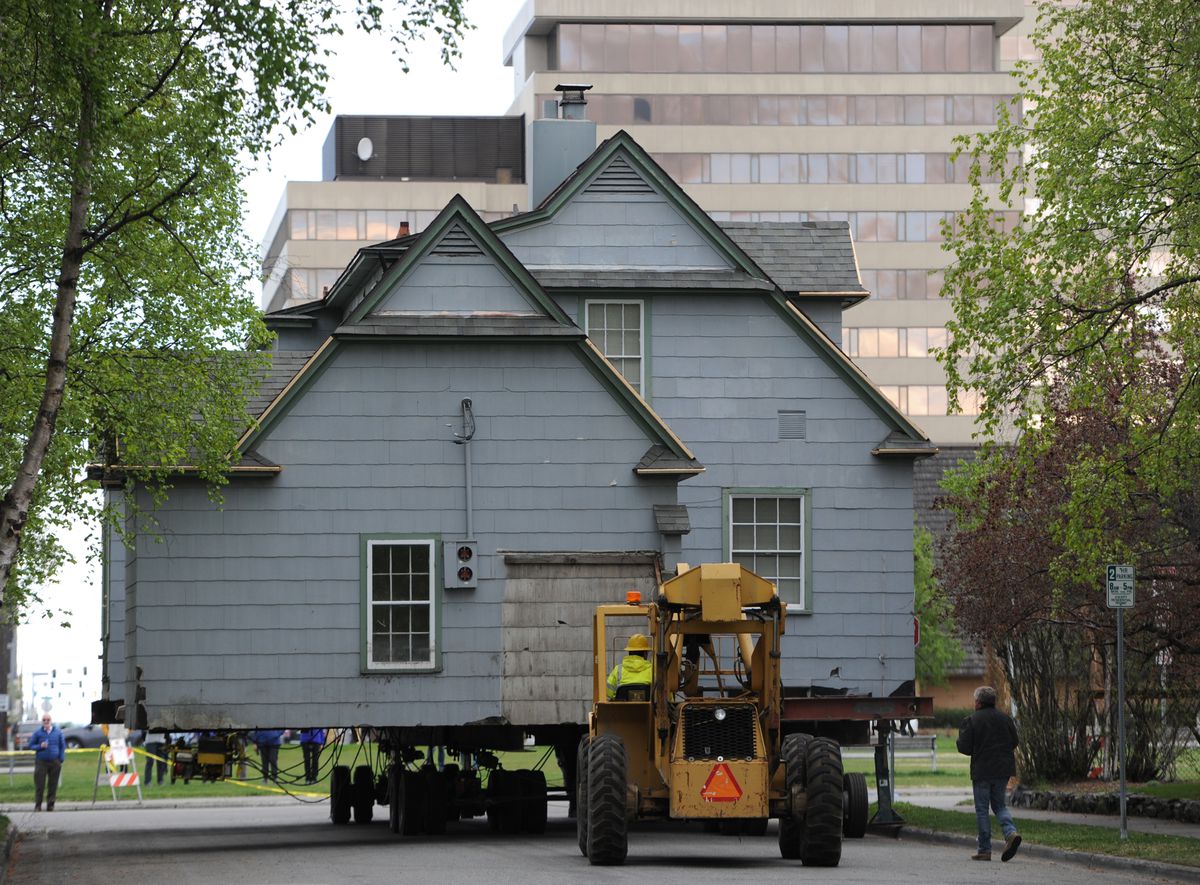 Darrel Greenstreet, right, helped move the historic Shonbeck house to its new location about a block away in South Addition on Monday. (Bill Roth / ADN)

Darrel Greenstreet, right, helped move the historic Shonbeck house to its new location about a block away in South Addition on Monday. (Bill Roth / ADN)

A man who lives in Anchorage’s South Addition neighborhood has succeeded in saving a historic house from demolition by getting it moved over one block.

Monday morning, the distinctive Cape Cod-style Shonbeck house — raised up, on wheels — inched slowly west down West 10th Avenue along the Delaney Park Strip, and then down H Street. A yellow construction lift pulled the rig down the residential road with a chain, stopping and starting to mind the tree branches and maneuver around curbs.

The house is named for Arthur A. Shonbeck, who came to Alaska from Wisconsin, arriving in Nome in 1900, according to the Cook Inlet Historical Society. He was a prominent businessman in the early years of Anchorage, according to that group, and he built the house in the 1930s.

Until Monday, the house was located at 1006 G. St. It was in danger of being torn down to make way for new luxury townhomes planned by Hultquist Homes, the developer that bought the property last year.

Joe Dugan, a neighbor, found a solution to preserve it. He had the house moved next to another home on a lot he owns at H Street and West 11th Avenue. But not before dealing with hurdles in city zoning rules.

The city wouldn’t permit two single-family homes at the new spot, but a duplex is allowed. That means the Shonbeck house will need to be connected in some way to the other house on the lot. Dugan plans to connect them via the basement.

“The idea of connecting two things that aren’t related is annoying, but that’s what I have to do to satisfy the city,” he said.

[This historic South Addition house might get demolished. A neighbor wants to move it a block to save it.]

Dugan had to foot the $40,000 bill to get the house moved by Greenstreet General Contracting, but the house itself only cost him $10, he said.

Construction on the townhomes set to go in the Shonbeck house’s old spot will start “in the very near future,” Hultquist Homes vice president Cody Hultquist said in an email. He called Dugan’s project to move the house a win for everyone involved.

“It wasn’t easy and there were a lot of little particulars that popped up along the way but that’s to be expected moving a house,” Hultquist said. “I commend Joe for his efforts and hope the rest of his project goes smooth.”

Some people stopped Monday morning to take pictures of the moving house, with its distinctive rounded doorway. Others emerged from their homes to watch it roll down the road. A couple of people even sat down by the sidewalk and sipped drinks as the house rounded the final corner.

“The main thing I was concerned about was getting it past that corner,” said Dugan, referring to the spot where H Street meets the park strip. The house will now be located in what used to be a yard — now dug-up — behind the other property he owns.

A porch that had been added on to the house after its original construction was demolished before the move. Early Monday afternoon, crews were working to move support beams over from the house’s old spot. Dugan hopes to get the foundation built quickly and eventually rent the house.

Some people gathered to watch the effort were other South Addition residents glad to see the house preserved.

“We were all trying to picture how they would move something that big,” said Patrice Parker, who lives nearby. “It’s going much smoother than we expected.”

Dan Olsen doesn’t live in the neighborhood but works downtown. He walked over to watch when he heard about what was happening.

“It does make Mondays better," he said, “when you get to see something like this.”