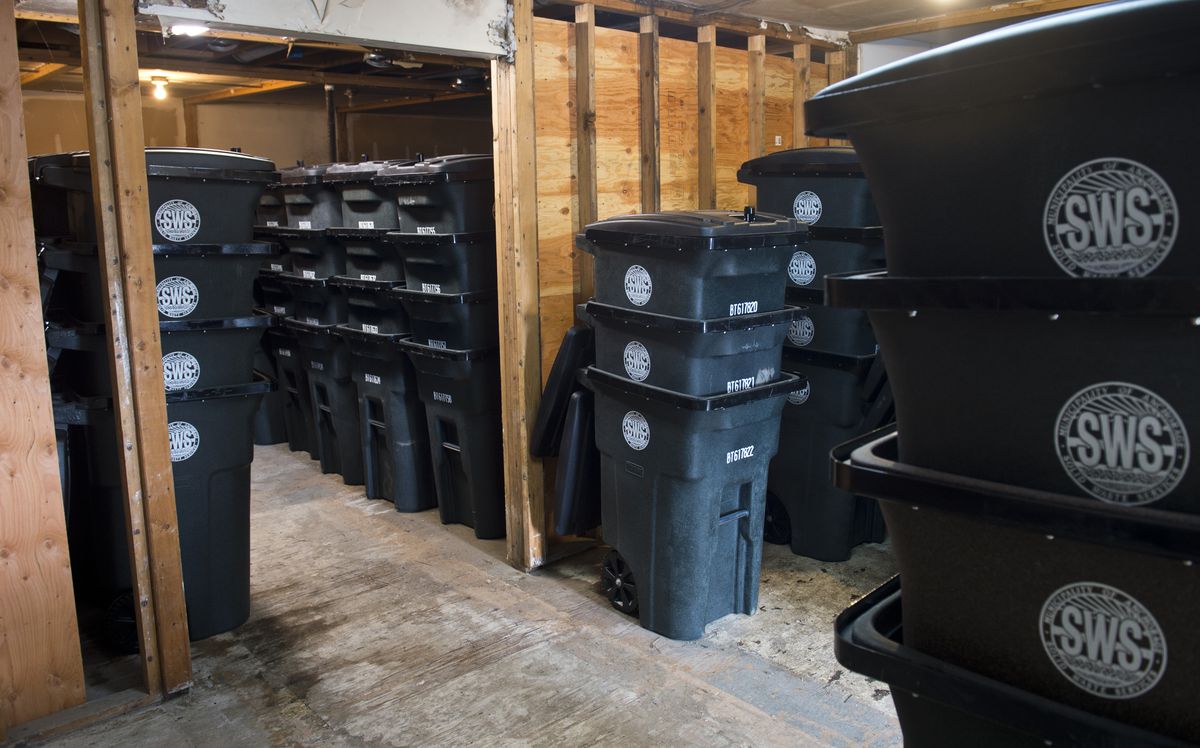 A proposal to reduce bear problems in Anchorage by toughening laws on trash storage is headed to the city Assembly on Tuesday.

The issue of sloppy trash storage drawing bears to Anchorage neighborhoods isn’t new. But wildlife officials said last year it had gotten out of hand.

“Unquestionably, trash is the No. 1 driver of conflicts with bears in Anchorage,” said Dave Battle, area wildlife biologist for the Alaska Department of Fish and Game. “If we could just wave a magic wand and turn all the trash containers in Anchorage into bear-resistant cans, I think we would almost have no conflicts.”

The new proposed ordinance doesn’t go that far, but it would allow elected officials to require bear-resistant trash bins or indoor garbage storage in bear-prone areas. Across the municipality, food scraps could no longer be left in plastic bags outside bins. Those who don’t comply could face fines.

The proposal’s supporters, including Battle, say the municipality needs to clean up to keep bears out of town. Unsecured trash is an easy, high-calorie meal for bears, Battle said. The trash can lure bears into neighborhoods, where they often become a nuisance or threat, and sometimes have to be shot and killed.

In 2018, 41 bears were killed in the municipality by police, park rangers and wildlife biologists who said the animals posed a threat, or by people who said they were defending their lives or property. That’s seven more bears killed than in 2017 and among the highest totals ever recorded.

But some have concerns about the costs and feasibility of requiring bear-resistant trash cans.

There have been no zones named yet, though officials said Girdwood would likely be first if the proposed ordinance passes.

Jason McDonald, general manager at Blue Arctic Waste Solutions, a privately owned waste hauler, said he supports securing trash to increase safety but has concerns about the expense of requiring residents to switch to bear-resistant containers.

It costs waste haulers about $250 to buy a 96-gallon bear-resistant container, including shipping, compared to $50 for a standard bin.

“The large residential haulers are going to fork up a lot of cash to get the containers up front,” McDonald said. Those expenses will be passed on to customers. “The public needs to know that the cost is ultimately on the homeowner,” he said.

Depending on the utility, a bear-resistant container costs a resident about $2 to $5 more a month than a standard trash bin. The city-operated Solid Waste Services also charges a $31.50 fee to change out an existing container after the first 180 days of service.

Jody Sola, Government Hill Community Council president, said it was possible some might be put off by higher costs.

“If there is an increase in costs, then maybe some of the neighbors will say, ‘If you’re going to require it, then we shouldn’t have to pay additional fees. We shouldn’t be penalized to live in this area,’ ” she said.

Sola started using a bear-resistant trash bin about two years ago when she moved to Government Hill. She’s part of a small slice of Anchorage residents who have opted to use the containers.

In a city of about 300,000 people, about 3,750 residential bear containers have been deployed by the privately owned Alaska Waste, about 206 by Solid Waste Services and about 35 by Blue Arctic Waste Solutions.

There’s also a state law that deals with trash and wildlife, but Battle has said it has proven difficult to enforce as well.

State law imposes a $320 ticket for intentionally or negligently feeding bears, which includes leaving out unsecured trash. To issue a citation, however, an officer must have evidence that trash had attracted a bear, such as a photograph of the animal in the garbage.

Battle described the new city proposal as “the most exciting thing to come around since I’ve been here, as far as getting people to secure trash.”

Here are some of the main elements of the proposal:

• Across the municipality, people could only leave plastic bags outside of a bin if the bags contained just “rubbish,” defined as solid wastes that won’t become rotten such as tin cans and glass.

• The proposal would also set new, citywide times for leaving trash out for collection. Bear-resistant containers could go out no more than 12 hours before the day of pickup, with all other containers going out the morning of collection. All trash bins would have to be brought in by 9 p.m. When not out for trash collection, bins would need to be stored inside a structure or within 5 feet of the main building.

• The tougher trash laws, including requiring bear-resistant containers or indoor trash storage, would apply to specific, bear-prone areas of town.

In western parts of Boulder, all trash carts, containers and dumpsters must be bear-resistant or stored in a structure until emptied by a trash hauler. In Missoula, people in a designated “Bear Buffer Zone” must keep their garbage in a bear-resistant container or enclosure, with a few exceptions.

In Alaska, Juneau law says that other than after 4 a.m. on pickup day, people must keep their trash in bear-resistant containers or enclosures, or face a fine.

Anchorage officials have flirted with requiring bear-resistant bins before.

In the mid-1990s, then-Assemblywoman Pat Abney introduced an ordinance that would have required indoor storage of garbage or bear-proof containers in certain areas. It would have mostly affected people living in the Hillside, Eagle River and Girdwood areas, according to news reports at the time.

But Abney eventually withdrew her proposal after facing widespread criticism from residents and the city administration who said it was too expensive and intrusive.

At the time, Rick Sinnott, then-Anchorage wildlife biologist for Fish and Game, told the Daily News that garbage and pet food regularly drew bears into the city.

“People get upset when there’s a bear shot in town,” Sinnott said in 1996. “As soon as it’s done, people forget about it. The problem is growing, and it’s going to get worse.”

So far this year, wildlife officials have killed one brown bear in a Hillside neighborhood and a person killed one black bear in Eagle River under defense of life and property laws, Battle said.

There seem to be fewer reports of bears so far this summer compared to the past two, he said.

He said it’s impossible to say what led to the uptick in bear kills in 2017 and 2018. One possibility, Battle said, is people grew less tolerant of bears after two fatal maulings in the Anchorage area in two summers.

After wildlife officials killed six bears in Girdwood last year, the local Board of Supervisors passed a resolution asking for a new city law that would require people in the area to secure garbage or face a fine.

Already, about 85% of Girdwood residents who use curbside pickup have bear-resistant bins, according to Alaska Waste. That makes it a good place to pilot the zone designations, Weddleton said.

Solid Waste Services said it supports the proposed ordinance, while Alaska Waste said it doesn’t have a position.

If the ordinance passes, Dunbar said, the city likely won’t move forward with any zone designations until waste haulers are able to offer bear-resistant bins in multiple sizes, so residents aren’t forced to move to a bigger container — another added cost.

Alayna DuPont, chair of Girdwood Bear Aware, a group that pushed for the new proposal, said it and other organizations hope to create a program to help subsidize the added costs of bear-resistant bins.

Other questions remain about the proposal, including whether the zones would be year-round and how much time people would have to acquire bear-resistant bins once a zone is designated. That’s all yet to be determined, Weddleton said.

A work session for the proposed ordinance is scheduled for June 14. At the earliest, the Assembly will vote June 18 on the proposal.