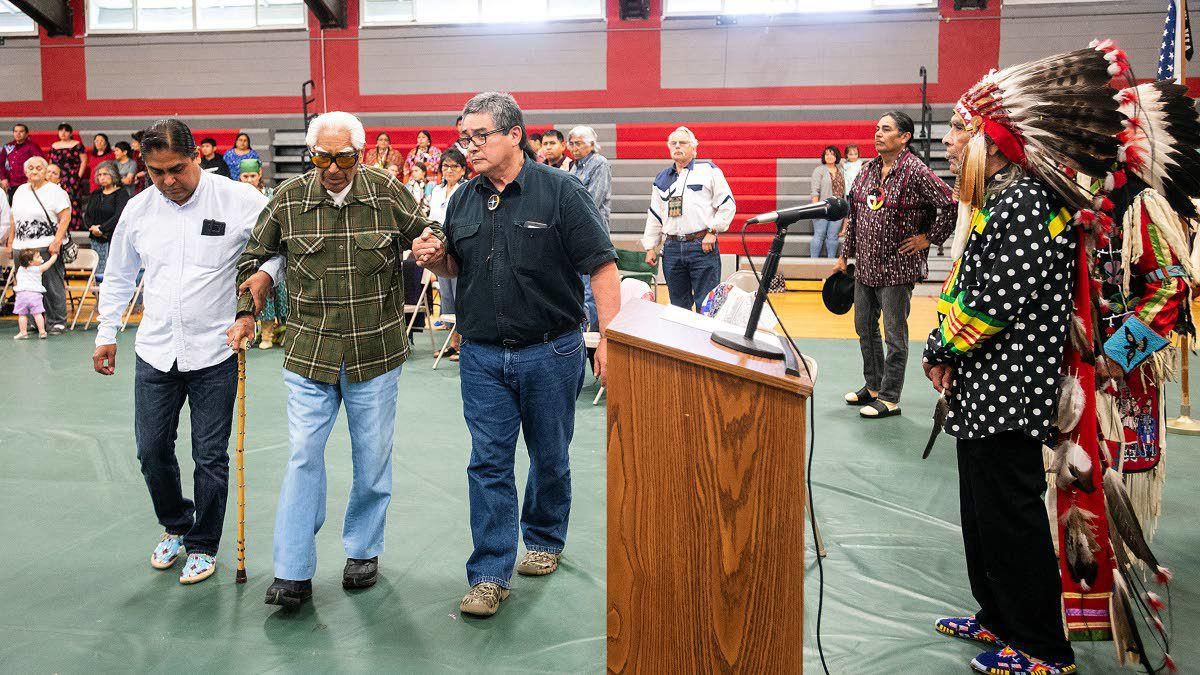 With the aid of family members, Alex Pinkham Jr., 94, of Anchorage, walks as he is honored for his service in World War II during a ceremony Saturday, June 8, 2019, at the Pi-Nee-Waus Community Center in Lapwai, Idaho. (Pete Caster / The Lewiston Tribune)

With the aid of family members, Alex Pinkham Jr., 94, of Anchorage, walks as he is honored for his service in World War II during a ceremony Saturday, June 8, 2019, at the Pi-Nee-Waus Community Center in Lapwai, Idaho. (Pete Caster / The Lewiston Tribune)

LAPWAI, Idaho — The oldest member of the Nez Perce Tribe and its last surviving veteran of World War II carefully made his way around the circle Saturday at the close of a special ceremony honoring his military service.

After leading other veterans in a second loop around the room, Alex “Mike” Pinkham Jr., 94, expressed gratitude for the prayers, songs and dances performed in his honor at the Pi-Nee-Waus Community Center.

“I am happy to be here and thankful for this gathering,” he said.

The moving tribute included a “Moonlight Dance” performed by the youngest descendants of his father, the late Alex Pinkham Sr. The dance has not been performed in public since 1974, according to family members.

The sounds of drums and traditional songs for warriors headed off to battle filled the air, along with the powerful voice of his nephew, Armand Minthorn of Mission, Ore., who led the invocation.

“Our elders said it is better to honor and appreciate and show your love to the ones who are living,” Minthorn told the crowd. “All of you are going to remember this day we honored an elder and WWII veteran.”

Pinkham, who served in the U.S. Navy, has lived in the Anchorage area since 1956. After retiring, he considered returning to the Lenore area, where he was raised in a family of nine children, but “it was too damn hot,” he said.

“I was used to Alaska and we have good weather up there,” Pinkham told the Tribune. “Alaska has been good to me.”

Pinkham first laid eyes on the territory while aboard a cargo ship during his stint in the Navy. He told his family the mountains up there are bigger than the ones in Idaho and someday he hoped to return.

His military service began in 1943, when he volunteered at age 18 along with a high school buddy. During the war, Pinkham worked as a gunner, guarding his vessel against airplanes in the Pacific Theater. He also served on Merchant Marine cargo ships, visiting multiple ports as far south as Australia.

At one point, he was on a ship that sailed to France to pick up U.S. troops and deliver them to Japan. He was in the South Pacific when the atomic bomb was dropped, and after Japan surrendered, he spent time in Tokyo harbor, turning 21 aboard the ship.

After he was discharged in 1946, Pinkham was trained as a diesel mechanic under the G.I. Bill and moved to the Yakama Indian Reservation, where he held a variety of seasonal jobs. A decade later, he loaded up his new 1955 Willys Jeep, which he still owns, and headed north.

“I just got tired of having to get three jobs every year,” Pinkham said. “I was lucky to get a job as a swab jockey in a Native hospital in Anchorage, and I worked there for 18 years. Since I had an all-year job, why would I leave?”

Pinkham homesteaded at Bird Creek, about 30 miles outside Anchorage, on 2.5 acres he purchased from the federal government for $240. His prefabricated cabin cost $1,200 and was delivered to the site in pieces.

“I put that cabin together myself,” Pinkham said, “and it’s still standing.”

He later built a house on the property, where he lived with his wife, Mary Ann, who died in 2006. The couple met at the hospital where they both worked. Pinkham also worked for the Alaska Railroad and retired for good when Jimmy Carter was president.

Pinkham, who now resides in a senior-living facility, said his last visit to Lapwai was about 15 years ago, but he keeps in touch with family, and his nephew, Jaime Pinkham of Portland, is a regular visitor to Alaska.

“It took me a long time to talk him into this,” Jaime Pinkham said. “He’s pretty quiet and self-sufficient. He and Alaska are well suited for each other.”

During the ceremony, Pinkham’s brother Allen, 81, said his family has a long history of military service, including another brother, the late Albert “Sandy” Pinkham, who also served in WWII and survived Omaha Beach in Normandy.

“He went through one year of continuous combat and never got a scratch,” Allen Pinkham told the Tribune.

Other members of the family participated in the ceremony, which lasted more than two hours. A dinner was held after gifts had been presented to Pinkham, including a special Pendleton blanket adorned with Appaloosa horses, and a quilt from the Lewis-Clark Quilts of Valor group. Idaho’s U.S. Sens. Mike Crapo and Jim Risch and Rep. Russ Fulcher sent an American flag from Washington, D.C.

“When we get people together like this, we always try to feed them,” Allen Pinkham said. “It’s a good way to get my older brother reacquainted with the people after all of these years.”

Mary Taylor, who runs the veterans program for the tribe, helped organize Saturday’s celebration when she heard the tribe’s only surviving WWII vet was returning for a visit. Seeing the new dances and paying tribute to the oldest tribal member brought tears to her eyes.

“He’s never been honored before and he’s a veteran,” she said. “We needed to do something special.”

This article originally appeared in The Lewiston Tribune and is republished here with permission.