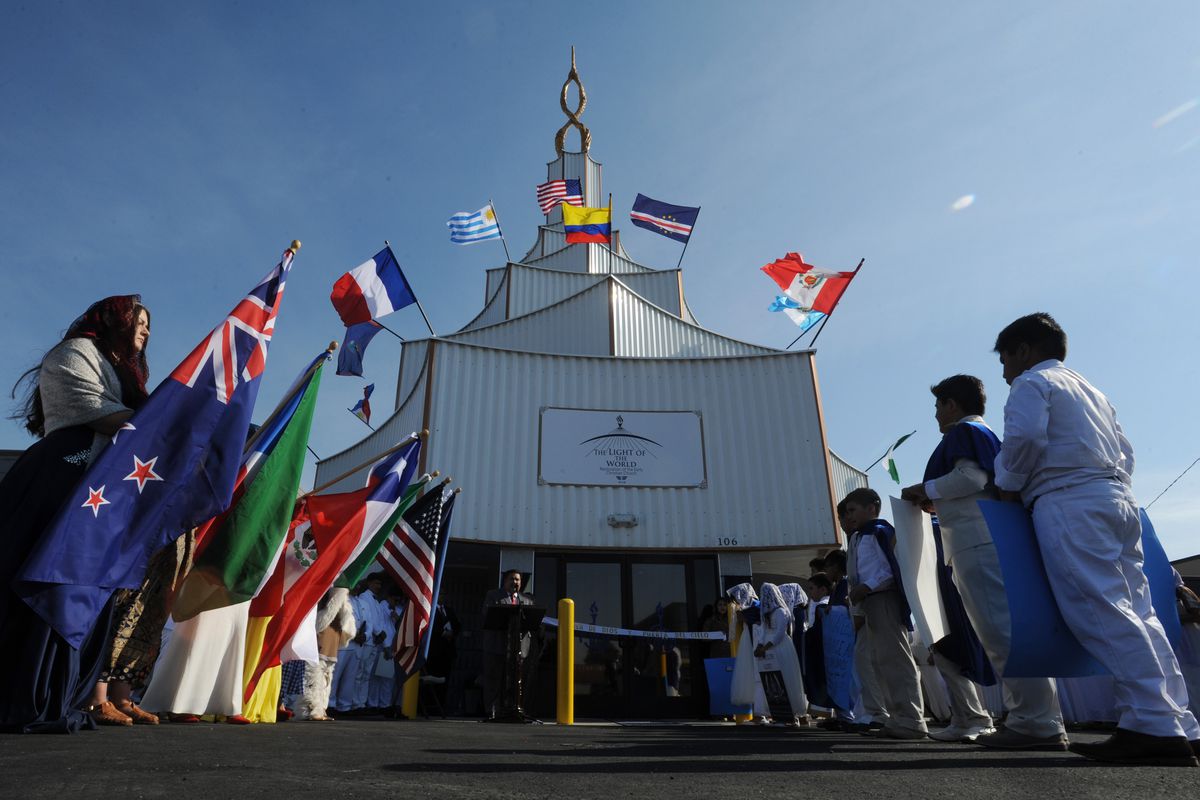 Flags from the 58 countries where The Light of the World Christian church has members adorn the recently opened La Luz del Mundo church on Fireweed Lane on Thursday, June 20, 2019. (Bill Roth / ADN)

Flags from the 58 countries where The Light of the World Christian church has members adorn the recently opened La Luz del Mundo church on Fireweed Lane on Thursday, June 20, 2019. (Bill Roth / ADN)

Where there had once been weeds and broken malt liquor bottles, a blue carpet — in red carpet fashion — was rolled through the temple’s open front door.

Members of the Anchorage congregation of La Luz del Mundo church walked into the temple to the aroma of white rose bouquets. Inside, it smelled not like fresh paint, but spring.

After 13 years of construction, La Luz del Mundo (“The Light of the World”) temple has finally opened its doors on Fireweed Lane. Construction began in 2006 on the unusual structure, known to some locally as the “wedding cake church" for its seven-tiered construction of white corrugated metal.

Celebrating with the Anchorage church community were choirs from Oregon and Washington state, while more than a hundred people packed into the pews and spilled out through the side doors into folding chairs.

The few dozen members of the congregation will use the new temple daily, with three daily services at 5 a.m., 9 a.m. and 6 p.m.

Lydia Ramirez, an 18-year-old missionary from Juneau who helped paint the multicolored ceiling of the sanctuary, felt blessed to attend the inauguration. Strapped for money, the flight from Juneau to Anchorage was not within her budget, so she prayed for help, she said.

On Wednesday morning, Ramirez said, those prayers were answered. She received a call saying a ticket had been arranged to fly her to the inauguration.

Members of the Anchorage congregation hosted Ramirez and three other young woman of the church who were traveling last minute. In the midst of tourist season, finding a hotel may have taken additional divine intervention.

Luis Alfaro of New York City also flew to Anchorage for the inauguration. A spokesman and pastor of his own congregation in Brooklyn, Alfaro has been with the church for 37 years. He expects the congregation in Anchorage to flourish now that construction of the temple is complete.

“We truly believe that growth is going to be fast,” Alfaro said.

Alfaro said there are now churches in 58 countries and every U.S. and Mexican state. Elsewhere in Alaska, groups of missionaries from the church can be found in Juneau, Fairbanks, Kenai and Wasilla.

Noticeably absent from the inauguration was The Light of the World’s apostle and grandson of the church’s founder, Naason Joaquin Garcia.

Apostle Joaquin Garcia is currently being held in Los Angeles, charged with human trafficking, production of child pornography and the forcible rape of a minor. Four different Jane Does are listed in the felony complaint, which includes mention of a speech delivered by Joaquin Garcia saying “an apostle of God can never be judged for his actions.”

As reported by the Los Angeles Times on Friday, Joaquin Garcia has pleaded not guilty to the charges.

“We deny all the allegations that are taking place right now,” Alfaro said in an interview.

He continued, lifting his hands to the ornately decorated temple, that such a good thing could not have come from a bad place.

“We can see the fruit. This church, this temple, is the fruit," he said, insisting then that Joaquin Garcia must then be a good tree.

In the apostle’s absence, his older brother, Pastor Benjamin Joaquin Garcia, gave the consecration. Dressed in a dark suit, standing out among the congregation in white, Pastor Joaquin Garcia spoke passionately for nearly two hours.

He told the congregation that no longer would they have to quietly pray and sing in their homes. Here, in the temple, they could use their full voices in prayer and song.

After the consecration, Anchorage Pastor Jahaziel Valadez walked out to the parking lot behind the temple to greet his congregation and visitors with a dinner of tacos.

Pastor Valadez, 39, was previously a pastor in California. Last August, he moved here with his wife and four children. His family loves Alaska and have especially enjoyed the 49th state for its snow.

“This is a great blessing,” Ramirez said of the inauguration. “Here is the love, the work, and the faith of the church,” he continued.

Thirty-year-old missionary Josue Guzman of Wasilla moved to Alaska in 2016. By day, Guzman works at a car dealership detailing vehicles, but he lights up when talking about the time he spent working on the temple.

Guzman says seeing the temple completed keeps him motivated to stay involved with the church.

What’s next now that the temple is finished? Like Alfaro, Guzman believes the congregation will only continue to grow. Eventually, he thinks, more construction will be needed.

“A bigger temple," says Guzman, “with the help of God.”