Panhandling, drinking and loitering are at a breaking point in Midtown Anchorage, businesses say 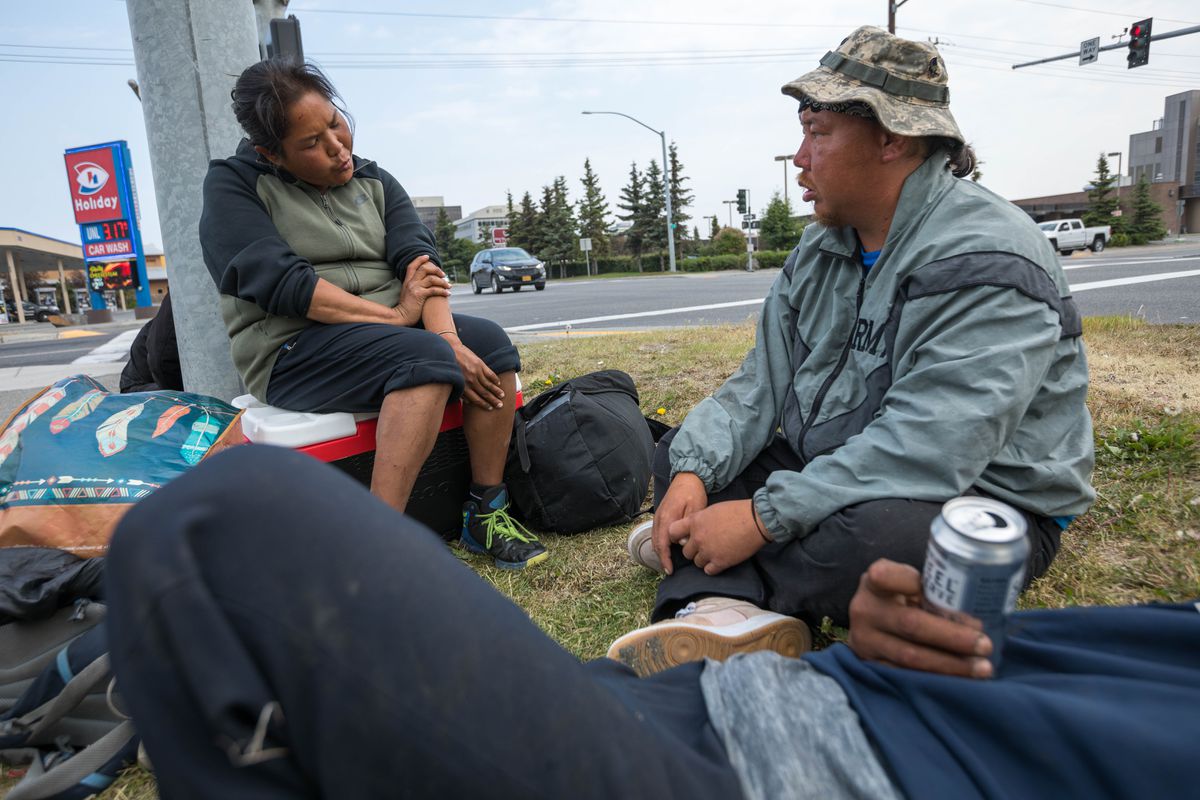 Sara Ondola-Carter, her husband Tony Carter, and a friend pass around a can of high-alcohol beer at an intersection in Midtown Anchorage Tuesday morning, June 25, 2019. The couple said they met outside of Fred Meyer and had been married about a year. "We have each other," he said, referring to his friends and family on the street. (Loren Holmes / ADN)

Sara Ondola-Carter, her husband Tony Carter, and a friend pass around a can of high-alcohol beer at an intersection in Midtown Anchorage Tuesday morning, June 25, 2019. The couple said they met outside of Fred Meyer and had been married about a year. "We have each other," he said, referring to his friends and family on the street. (Loren Holmes / ADN)

Midtown Anchorage businesses say homelessness, panhandling and public drinking have reached a crisis point, and the district’s community council is poised to send a strongly worded resolution to the city asking for more aggressive enforcement of anti-panhandling and nuisance laws.

Albert Circosta, treasurer and secretary of the community council, sent out a copy of the resolution with an email describing panhandling and “drinking parties” in the public right of way. The body will consider it Wednesday.

“No matter how much we coordinate or add dollars for security contracts, it remains very difficult to manage this situation next to the ongoing public inebriation parties,” he said.

The measure also comes in response to a letter that Rep. Zack Fields, D-Anchorage, and eight other legislators sent to the city earlier this month, asking for more aggressive clearing of homeless camps in public parks, said Ric Davidge, vice president of the council. Davidge, who wrote the resolution, and wife Connie Yoshimura, a real estate broker who owns Dwell Realty, have offices in Midtown, he said. Businesses there have had enough, he said.

“What’s happened, every one of our meetings without exception, some business person has come to complain with what is happening to their business,” Davidge said.

The city has stepped up efforts to clear the parks and to get homeless people into the shelter system and housing over the last few years, reducing the total number of homeless in the city between 2017 and 2018. But, police and homeless advocates say, recent camp abatements may have made some homeless who were living in the woods more transient and more visible, pushing them out of the wooded areas in the Chester Creek greenbelt into adjacent Midtown.

Public outcry about camps and homelessness across Anchorage has become more intense, especially in recent weeks.

[Anchorage is doing more than ever to clear homeless camps. But to many, the problem has never been worse.]

The Midtown Community Council district is bordered by Arctic Boulevard to the west, Fireweed Lane to the north, the Seward Highway to the east and International Airport Road to the south. The area is mainly commercial with some residential pockets. The council is made up mostly of business owners. Many businesses are having problems with loitering in the municipal right-of-way, panhandling, shoplifting, drinking and menacing behavior like pounding on windows, Davidge said. Some of their employees have been assaulted when they tried to intervene with shoplifting.

The resolution calls homelessness a “community crisis” and connects it generally with the spread of infectious diseases, including “the bubonic plague, typhus, tuberculosis, hepatitis A and C,” as well as crime, litter, public defecation and open drug use. It knocks the organizations charged with dealing with the homeless problem as being ineffective, “a group now generally referred to as the ‘homeless industrial complex,'” and says they waste public money. It also says police are turning a blind eye to panhandling.

“The Municipality has, we have been informed, directed the Anchorage Police Department not to fully enforce certain laws,” it says.

The resolution also pushes for a tent city to house homeless people, tickets to send willing homeless people back to villages or Outside, and job training in rural Alaska “so that young remote residents can learn how to survive in a western 9-5 work culture.”

Lt. Jack Carson, who oversees community policing with the Anchorage Police Department, took issue with the resolution’s assertion that the department isn’t enforcing panhandling rules. The department has focused on panhandling, he said. But it is not illegal to sit in the municipal right-of-way in Midtown with a sign if you’re not blocking the sidewalk, he said. It is illegal to take money from cars and to give money out a car window, he said.

“The money is what’s bringing them to that corner,” he said.

Police can cite both panhandlers who take money and drivers who give money or other things like food or hygiene supplies out their windows, he said. In the downtown business district police may write a panhandling citation, he said, which is a civil, not criminal, infraction. Public drinking may also net a $100 fine. The problem is that homeless people generally have no money to pay, he said. Fines have not shown to change behavior in the homeless population, he said. Outreach has been, he said.

“Everybody is wanting the APD to arrest our way out of this, but it needs to be a change in a behavior by everybody,” he said.

If someone wants to give money, he recommended giving to nonprofit charities that help the homeless. The department is also focused on shoplifting, he said, with a number of recent retail stings. The majority of those arrested are not homeless, he said. He stressed that people in Midtown should call the police rather than intervening to stop criminal activity.

Gene Smallwood, 43, sat with a group of seven on the southwest corner of West 36th Avenue and C Street on Tuesday morning. Smallwood has lived outside in Midtown for 15 years, he said. He avoids the homeless shelters because of the bugs and the noise, he said. He’d rather listen to the traffic.

JR Voyles, 54, sat next to him. He’s been homeless in Midtown 10 years, he said. Both men attended Mount Edgecumbe High School, a boarding school in Sitka attended mostly by students from Alaska Native villages, although a decade apart. After school, Voyles said, he worked construction but is “too beat up” to work anymore. He has been sleeping mostly in Midtown, he said. He doesn’t have a tent. He said he spends his nights near Outback Steakhouse or Credit Union 1.

“They’ve got a good overhang,” he said.

Others in the group recognized that members of the community saw them as a nuisance. As recently as two weeks ago, the group said they’d been asked to leave buildings they had once felt welcome around. Voyles sipped a can of Steel Reserve, getting a little emotional.

“No matter what happens in this lifetime, be happy, keep a sense of humor. Keep your friends next to you. You’ve got to love each other,” he said. “Fighting becomes the end of debate.”