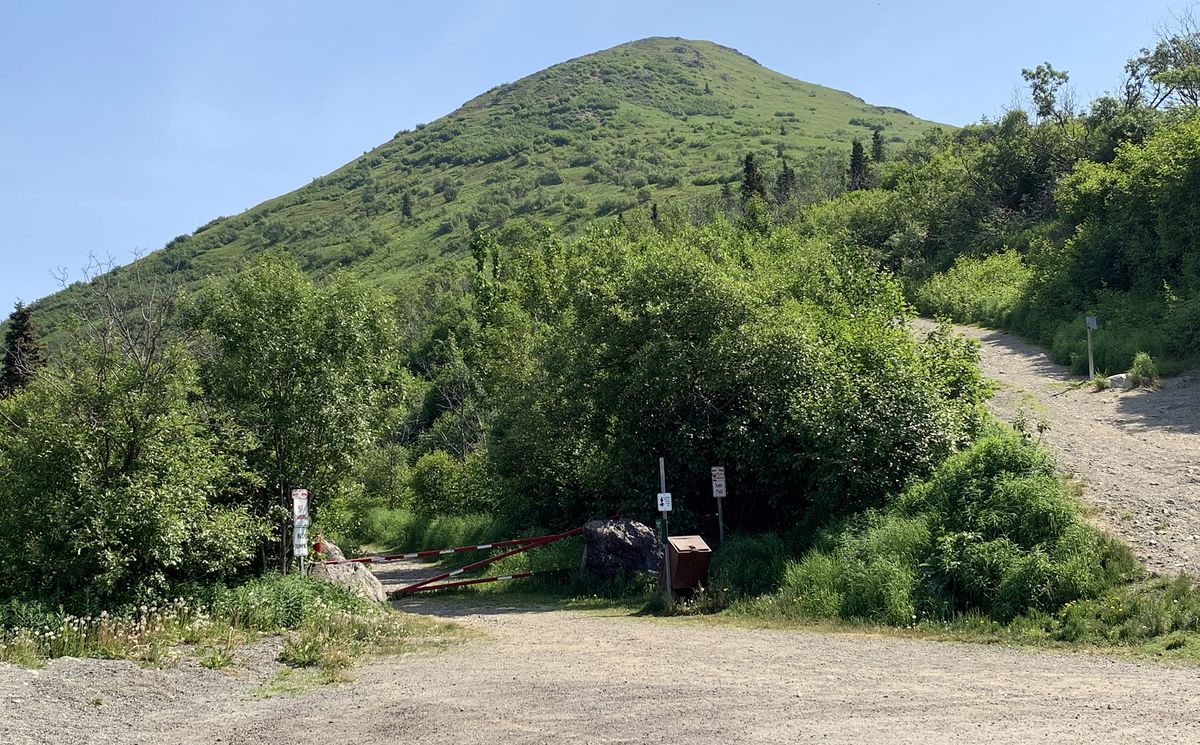 Mount Baldy, in the background, looms over a pair of access trails leading to the summit. The trail on the right is on a municipal right-of-way, while the road at left is privately owned. The owners of the 360-acre parcel of land say they will begin to restrict access to the trail crossing their property, which is less steep than the trail running up the front side of the mountain. (Matt Tunseth / Chugiak-Eagle River Star)

Mount Baldy, in the background, looms over a pair of access trails leading to the summit. The trail on the right is on a municipal right-of-way, while the road at left is privately owned. The owners of the 360-acre parcel of land say they will begin to restrict access to the trail crossing their property, which is less steep than the trail running up the front side of the mountain. (Matt Tunseth / Chugiak-Eagle River Star)

An easy and gentle way to get up Mount Baldy, one of the most popular hiking destinations in Eagle River, is now closed to the public.

Recreational access passes at the private Wallace Brothers Mountain Subdivision expired July 1, and no further passes will be issued, according to the property owners. The decision means the area to the north of the main Mount Baldy parking area is now technically off-limits to hikers.

The closure does not impact the main Mount Baldy trail, but anyone hoping to use the gravel access road just to hiker’s left of the main trail is out of luck; the gentle route up to a saddle on the “backside” Mount Baldy trail is preferred by those who want to avoid the much steeper and deeply eroded main trail.

“There should be no access after today because all of our access permits expire today,” said Paula Caywood, one of several people who jointly own the land formerly homesteaded by the Wallace family.

The road leading to the rolling hills of the 320-acre property adjacent to Chugach State Park is already gated, but property owners have so far allowed the public to use the land freely thanks to the access pass system — which has never been enforced. However, Caywood said private property signs will likely soon go up at the gate to more strictly enforce the closure.

The decision comes after years of failed attempts by the property owners to get the land into public hands. Group spokesman Bill Tucker said the group has tried selling the land to either the state or a private conservation group, but so far they have gotten no takers and must now make the difficult decision to try to sell the land to a private developer.

“The gist of the problem is we’ve got a lot of folks that want to see this happen, however, it still takes money,” Tucker said.

Tucker said he has to look out for all the property owners, who include both investors and members of the Wallace family.

“I have people who in all fairness expect some return on their 25-year investment,” he said.

Tucker and Caywood said another member of the ownership group, Wallace daughter Stephanie LeProwse, was already in the process of listing her share of the land for sale. LeProwse could not be reached for comment Monday.

The group has solicited the public’s support for a state purchase and even created a website touting the land’s potential value as an addition to the park. There’s a pond and a flowing water well on the site, as well as the access road and several trails leading into the park from the private land.

The website contains testimonials from trail users and a plea for the state to buy the land and incorporate it into Chugach State Park. But with a lean state budget, there has been little interest in Juneau for what would likely be a multimillion-dollar land purchase.

On Wednesday, hikers Alicia Blenkush, Gustavo Frankl and Poppy Jinanon used the Wallace Brothers trail to hike up Mount Baldy. Blenkush also had her 5-year-old daughter in tow and a toddler in a backpack. If the only option up Baldy is the steep frontside trail, Blenkush said she would feel uncomfortable hiking the trail with a baby on board.

“I think it would be a challenge, if not dangerous, going up the other side,” she said.

“I would run up the steepest section and use this as my relaxed, easy-on-the-knees recovery,” he said.

Hikers may not notice much of a change immediately, said Caywood, but both she and Tucker said it now appears the land will end up in the hands of a private developer.

“We’re going to have to regroup and figure out what to do next,” she said.

Blenkush said that if the land is eventually developed as a subdivision, Eagle River will lose a valuable piece of its recreational heritage.

“I think it would be sort of like a blemish,” she said.