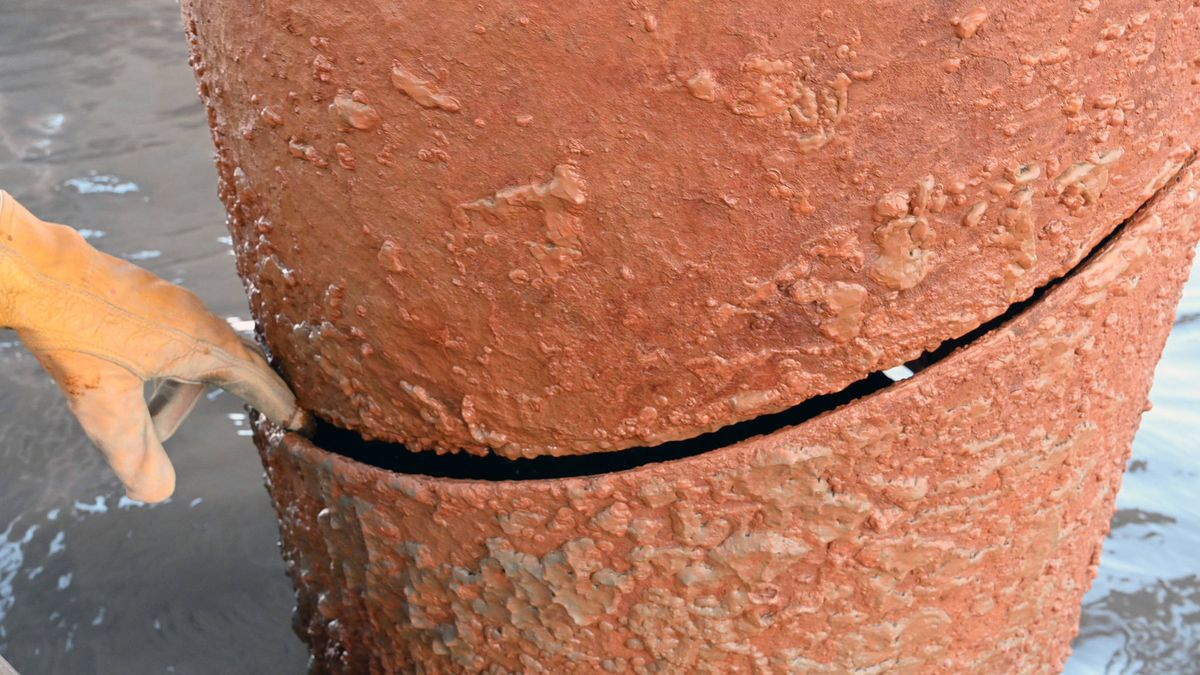 A recent examination of piles at the Port of Alaska petroleum and cement terminals revealed more extensive damage from the 7.1 magnitude earthquake that struck on Nov. 30, 2018. This photo shows the unraveling of a spiral weld on a pile supporting the terminal that has compromised its ability to carry vertical load and resist lateral seismic movement. (Photo courtesy Port of Alaska)

A recent examination of piles at the Port of Alaska petroleum and cement terminals revealed more extensive damage from the 7.1 magnitude earthquake that struck on Nov. 30, 2018. This photo shows the unraveling of a spiral weld on a pile supporting the terminal that has compromised its ability to carry vertical load and resist lateral seismic movement. (Photo courtesy Port of Alaska)

The primary users of Anchorage’s beleaguered port want city officials to delay the first major rehabilitation work at the port in years while port leaders continue to discover earthquake damage to critical infrastructure.

The eight companies that make up the informal “Port of Alaska Users Group” sent similar letters to Anchorage Mayor Ethan Berkowitz on June 28 and members of the Anchorage Assembly on July 12 urging them to stop advancing work to build a new petroleum and cement terminal.

They contend the municipality’s plan to start building the roughly $220 million petroleum and cement import terminal, or PCT, without having a way to pay for all of it would leave the city with a “trestle to nowhere,” according to the July 12 letter to the Assembly, and could invite tariff increases that would impact business at Anchorage’s other logistics hub.

“Fuel is a highly sensitive commodity and as the 5th busiest air cargo hub in the world, it seems imprudent not to conduct this type of analysis before proceeding down any path that might produce negative fiscal impacts to our fragile Alaskan economy. Ultimately, without knowing what the final cost of the project will be, it is impossible to determine what the appropriate tariff should be to underwrite the project, and by extension, whether the increased tariff is even feasible for the airport customers,” the July 12 letter to the Assembly states.

The port user group is composed of the general cargo shippers Tote Maritime and Matson Inc.; five fuel supplier and distribution companies; and Alaska Basic Industries, which is primarily a cement distributor.

The Anchorage Assembly officially changed the name of the city-owned port in 2017 from the Port of Anchorage to the Port of Alaska in an attempt to highlight its importance statewide and possibly drum up support for funding the rebuild.

Some sections of the pile-supported docks have been in place since 1961 and have far exceeded their initial 35-year design life. Studies indicate the pile maintenance program can keep the docks open for about another nine years before pervasive corrosion from seawater will start forcing closures.

Major construction at the port has been on hold since 2010 after major damage to the sheet pile then being installed to support new docks was discovered. The original port expansion project cost upward of $300 million but resulted in little usable infrastructure. The Municipality of Anchorage is engaged in a lawsuit against the federal Maritime Administration, or MARAD, which oversaw the failed work. The Federal Claims Court judge presiding over the lawsuit is scheduled to visit the port Aug. 1-2.

Port officials stress rebuilding the docks is becoming more and more a time-sensitive issue. While the port survived the 7.1 magnitude Nov. 30 earthquake, it didn’t come out of the shaking unscathed, according to port spokesman Jim Jager.

He said in an interview that post-earthquake inspections of the already corroded pilings supporting the docks conducted since breakup have shown the port’s two current fuel docks are the facilities most at risk of failure in another earthquake. This month, port engineers de-rated the load capacity of the Terminal 1 dock adjacent to petroleum, oil and lubricant dock No. 1 because of earthquake damage, according to Jager.

Additionally, roughly 20% of the pilings under petroleum dock No. 2 have failed, he said, and most of the damage is likely due to the earthquake.

“Engineers say that dock is vulnerable to progressive collapse. … Consequently, the dock is likely to function normally, until it doesn’t. Individual pile failures may not cause the overall dock to fail … until they create a failure that moves from one pile to adjacent piling (think of dominoes falling),” Jager added via email.

In February, city officials released a concept analysis that indicated the port’s import charges on fuels and cement would have to be increased five-fold or more if the municipality needed to sell $200 million worth of revenue bonds to pay for the new PCT.

At the time, Anchorage Municipal Manager Bill Falsey said the city was trying to spread the $60 million it has for the port modernization effort to support preconstruction work on other portions of the project; however, officials have since decided to put that $60 million toward a new PCT.

Port users immediately responded to the concept tariffs by stressing the cost increases would certainly have major negative consequences on their business and could also drive air cargo traffic away from Ted Stevens Anchorage International Airport.

The Anchorage airport is the fifth-busiest cargo hub in the world mainly because of its position between manufacturers in East Asia and consumers in North America, and that cargo business is a large reason the airport supports 10% of the jobs in the city, according to the Anchorage Economic Development Corp.

Refueling in Anchorage allows carriers to fill aircraft with more cargo instead of carrying the added fuel that would be needed to reach refueling hubs or destinations to the south and east.

However, the economics of the cargo business model rely on a difference of pennies per gallon between hauling more fuel or hauling more cargo, industry experts note. As a result, any tariff change at the port could impact international business at the airport, according to fuel company representatives.

The PCT tariff analysis was largely an exercise to elevate the discussion about how the work most everyone agrees needs to happen should be paid for and less a step toward actually implementing large tariff hikes, city officials have said.

“We talked to people and we agree, a tariff of that rate would have negative impacts on cargo operations at the airport,” Falsey said during a July 12 Assembly work session on the matter, adding the city will won’t do anything to drive business away from the airport or port, which could end up reducing the tariff revenue to fund port improvements.

Still, he noted that some tariff increases on most cargo crossing the Anchorage docks are likely unavoidable as the overall port rehabilitation project continues.

Port managers received a $42 million bid last month from Seattle-based Pacific Pile and Marine to build the PCT access trestle and platform next year with cathodic corrosion protection. The bid would leave the city about $100 million short of finishing the PCT, which would still need piping, utilities and mooring dolphins to secure offloading vessels, Falsey said.

City officials initially expected the “phase one” PCT work to cost closer to $60 million, and delaying the work would likely push the cost back up, Falsey added.

While not ideal, building part of the PCT would give the port a new, seismically resilient “dock” that could be used to offload fuel and cargo if an emergency — such as another major earthquake — rendered the three existing cargo terminals unusable before they are rebuilt, according to Falsey.

The Assembly is scheduled to vote on funding the contract Tuesday.

Marathon Petroleum spokesman Casey Sullivan urged the Assembly to reject the PCT construction contract and other major port work until the city has an overall financing plan. Moving ahead without full funding and a more detailed economic impact analysis of tariff increases is a signal of uncertainty to the port’s customers who would still have to plan for the most severe tariff increases possible, he and other representatives of port user companies said.

However, Falsey said in a brief interview that city and port officials have not been able to get specific information from fuel companies engaged in a highly competitive industry as to what level of tariff increases they would be able to absorb. Other Anchorage economic experts have similarly said getting detailed information on what would deter air cargo companies from stopping here is virtually impossible.

The municipality is also concerned delaying the work could also hurt future logistics business prospects in Anchorage as companies could see slowing the work at the port as a signal the city has no plan to rebuild the docks before they deteriorate to the point of needing to be closed, he said.

According to Falsey, the Assembly needs to approve the contract by about Aug. 1 if the city is going to have the work done next summer to allow Pacific Pile and Marine to order long lead time items such as the steel piles that would support the PCT trestle and platform.

Building the PCT to the south of the current docks will also free up port frontage needed when the larger cargo docks are replaced, port officials emphasize.

Sullivan and Yampolsky said the user companies have ideas on how to substantially lessen the $1.9 billion cost estimate for the overall port modernization project, and taking the time to develop a new, comprehensive plan would help gain the support of all the stakeholders in the project. That support will be needed to obtain large sums of federal grants or other funding for the work, they said.

Falsey and port officials have stressed they will not build a $1.9 billion port; it’s simply unaffordable, and the Assembly has hired a consultant to review the high cost estimate and suggest lower-cost alternatives. That report is due in September and the port users encouraged the Assembly to hold off on any major decisions on the port at least until then.