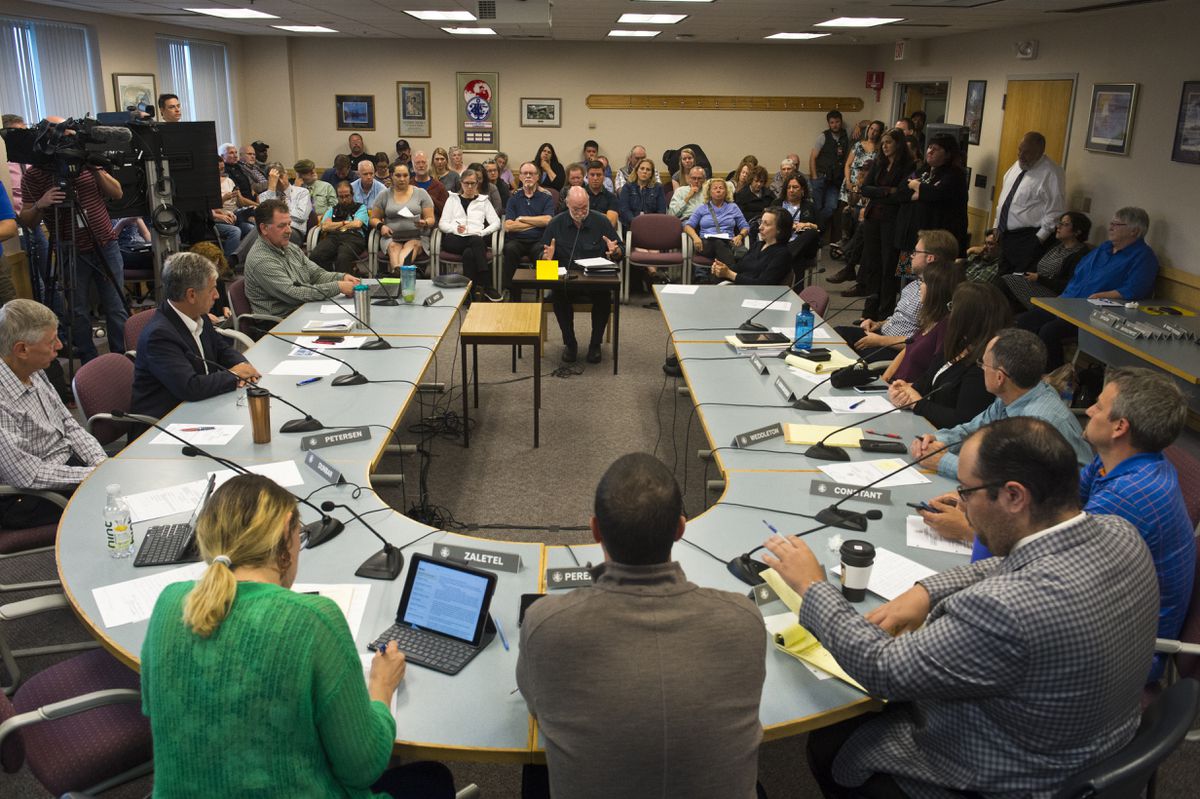 A special meeting of the Anchorage Assembly’s Committee on Homeless is attended by an overflow crowd at City Hall on Friday, July 26, 2019. (Marc Lester / ADN)

A special meeting of the Anchorage Assembly’s Committee on Homeless is attended by an overflow crowd at City Hall on Friday, July 26, 2019. (Marc Lester / ADN)

The Anchorage Assembly approved a resolution Friday morning allowing Mayor Ethan Berkowitz to extend the civil emergency declaration he made Wednesday to last until Aug. 6. The resolution also directs the mayor to enter into a contract with Brother Francis Shelter to provide shelter for the homeless, which could stop the shelter from drastically reducing capacity due to budget cuts.

“What’s happening at the state level is so disruptive to existing services,” Berkowitz said. “We’re treating this as the emergency that it is. We have to get it stabilized. Once we get things stabilized, we’re going to be able to take a longer-term look at what is sustainable for these shelters.”

The original declaration came in response to the vetoes, which significantly reduce funds for homeless services and other programs. The cuts came without enough warning to allow agencies to plan, and are projected to increase the number of people without any shelter by 600 to 800 over the next year. Those numbers are expected to tax police and fire resources, as well as hospitals and jails. When they declared the emergency, city officials cited “dire and imminent public safety and health risks.”

The most immediate concern has been Brother Francis Shelter, the city’s largest shelter, which was preparing to close its 240-bed facility for four days in order to reopen with a capacity of 100. The city’s usual unsheltered homeless count has been between 100 and 300 people. Just the addition of 140 people is expected to tax public safety and hospital resources, city officials have said. The shelter has also already begun closing during the day.

In a committee meeting before the Friday Assembly meeting, members discussed ways the city might fund Brother Francis at roughly $400,000, a figure that would allow the shelter to avoid closing in August or losing capacity. At the meeting of the full Assembly that followed, they added a provision directing Berkowitz to find funds to keep the shelter operating. The resolution also allows the city to more rapidly enter into procurement contracts and to be unrestricted by building codes if it finds a site for an additional emergency shelter.

Ona Brause, the mayor’s chief of staff, said that the stopgap shelter funds could come from a $200,000 line item for cold weather shelter along with a collection of funding from various sources, including unfilled positions. The Assembly would have to find ways to repay those monies, but they could solve the problem facing the shelter until the end of its fiscal year in 2020, Brause said.

“One year of funding really just gives us a year to make the same decision,” said Lisa Aquino, who is the head of Catholic Social Services. “Unless we know there is other funding, we’ll have to step down services.”

In most communities, emergency shelters like Brother Francis are funded by both state and local governments, she said. The municipality does not fund the Anchorage shelter, she said. It is funded by individual and corporate donors as well as the Archdiocese of Anchorage. The largest of the donors is Providence Health and Services, which also provides food for shelter residents, she said.

The cuts to homeless services in Anchorage total more than $5 million, and a Brother Francis closure is just one piece of a slow-motion homeless crisis. Among the remaining immediate problems are two housing programs run by Rural Cap that are facing closure. Safe Harbor, a 50-unit transitional housing facility for homeless families operated by RurAL CAP, has lost funding for the staff necessary to operate. There are currently 88 children living in the facility. Sitka Place — a 55-unit housing facility for people who were formerly homeless and have serious mental health and physical disabilities — will also have to close to the loss of operating costs.

Assemblyman Chris Constant, who represents downtown, said he’s been hearing for constituents that they are seeing far more homeless people on the street already, just with the daytime closure at Brother Francis.

“Things have dramatically changed in just two weeks,” he said. “For my neighborhood and my district, the crisis is here now.”

Berkowitz said before Dunleavy vetoed the homeless service funds, the city had reduced its homeless population and was in talks with a number of private parties and philanthropic groups to help fund programs to reduce the population further, getting people out of camps and into housing. Current political conditions are making those partners nervous, he said.

“We made some significant progress prior to this crisis being thrust upon us,” he said.