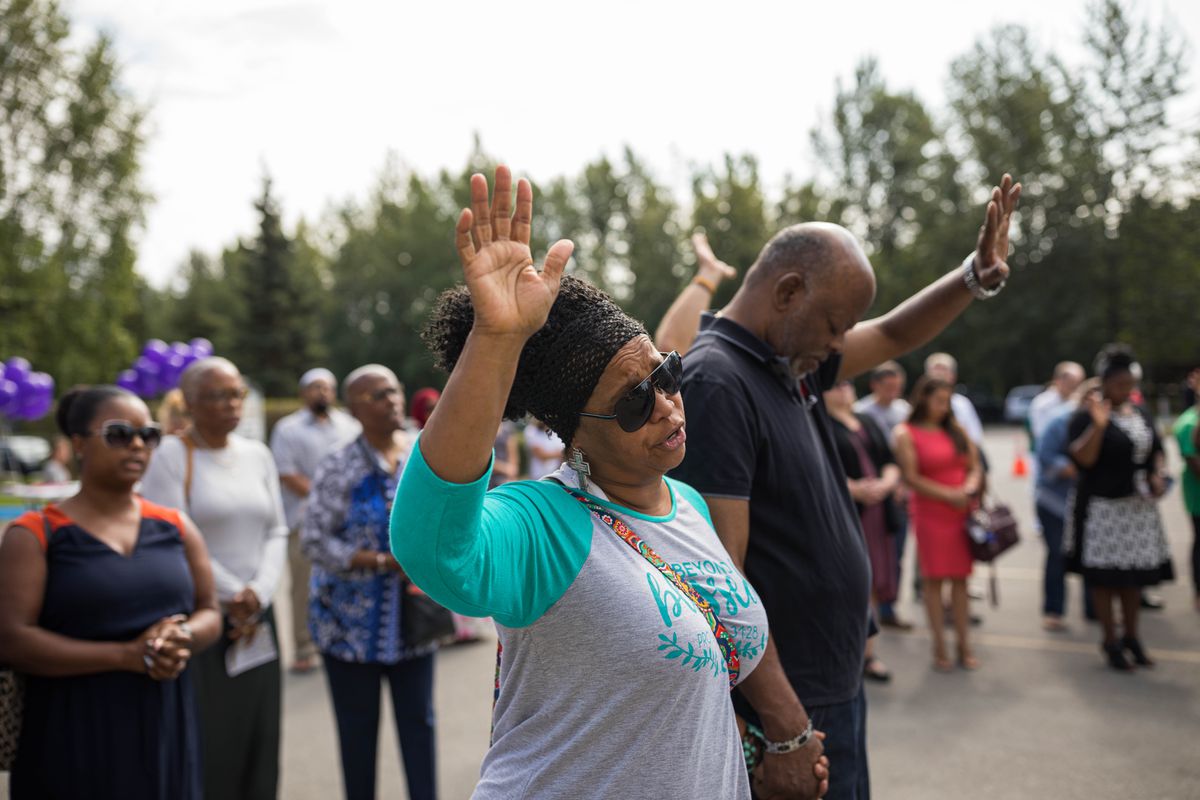 Belinda Heartwell and her husband Robert Heartwell pray during a prayer vigil Saturday, Aug. 10, 2019 at Shiloh Baptist Church. The vigil was held in response to the recent shootings in El Paso, Texas and Dayton, Ohio. (Loren Holmes / ADN)

Belinda Heartwell and her husband Robert Heartwell pray during a prayer vigil Saturday, Aug. 10, 2019 at Shiloh Baptist Church. The vigil was held in response to the recent shootings in El Paso, Texas and Dayton, Ohio. (Loren Holmes / ADN)

Thirty-one purple balloons drifted over Anchorage’s Fairview neighborhood on Saturday, each one representing a person who was killed last week in mass shootings in El Paso, Texas, and Dayton, Ohio.

The balloons rose above Shiloh Missionary Baptist Church, where Alaskans thousands of miles away from where the two shootings happened had come to remember the victims and pray for healing.

[Families mourn and bury those killed in Ohio and Texas shootings]

For Undra Parker, pastor at Shiloh Missionary Baptist, the vigil was as much about preventing violence by building a loving community as remembering the victims of the massacres.

“We just don’t believe, in the Christian community, that people would harm other people if we really cared for them — if you really loved them, if you really knew who they were," Parker said.

Authorities believe Patrick Crusius, the 21-year-old accused of carrying out the shooting in Texas at an El Paso Walmart, posted a racist manifesto online that railed against a perceived wave of Latino immigrants into the U.S. Crusius later admitted to detectives that he had targeted Mexicans in the shooting, authorities said.

Investigators have said it’s unlikely that Conner Betts, the 24-year-old gunman who opened fire in a popular nightlife district in Dayton, Ohio, shooting, was motivated by racial hatred, according to the Associated Press. His former classmates have said he had a history of violence and misogyny.

Parker, the pastor, saw the shootings as symptoms of a nationwide lack of love.

That sentiment was reflected in the diverse assembly of congregants, who held hands and shared hugs throughout the event.

“What encourages me is things like this,” said Mike Nwanju, a pastor at God’s Family Church in Anchorage, “that even though there’s darkness, there’s light, and that light will always outweigh darkness.”

Parker told the attendees the vigil was not a political event. No mention of policy was made as faith leaders from all over Anchorage took the mic, leading the gathering in prayers for the victims’ families, repentance on the part of the nation, and intervention for potential future shooters.

For social worker Sandra Jenkins, that last prayer was especially meaningful. Jenkins, a member of the church for 10 years, wondered if the course of the shooters’ lives could have been changed by positive relationships.

Relationships, Parker said, are the reason he doesn’t get discouraged in his faith, even after multiple consecutive mass shootings.