'I was afraid the kids might wake up and scream’: Curious moose takes a long look into tent of urban campers 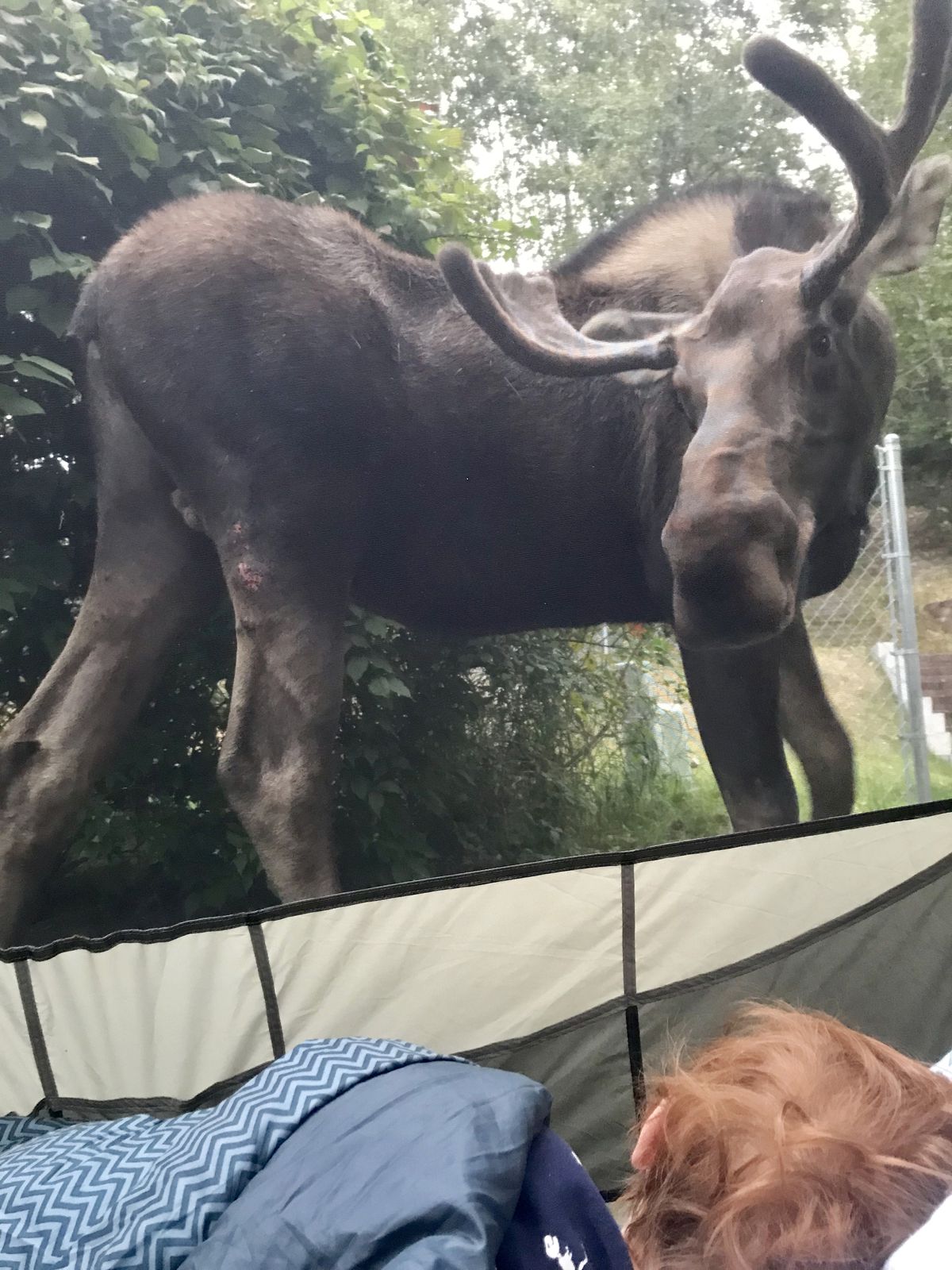 A bull moose sniffs at sleeping Elias Terland, 6, through the mesh of a tent, pitched on an Oceanview neighborhood lawn. (Photo by Hannah Predeger)

A bull moose sniffs at sleeping Elias Terland, 6, through the mesh of a tent, pitched on an Oceanview neighborhood lawn. (Photo by Hannah Predeger)

Hannah Predeger woke up Tuesday morning to a big bull moose nose pushing at the mesh of the tent she was in.

Predeger, along with her two children, ages 6 and 3, and two neighbor kids, also ages 6 and 3, had pitched a tent in their Oceanview neighborhood in South Anchorage for one last summer campout. They’d fallen asleep by the time the stars came out.

Then came an abrupt awakening.

Around 7 a.m., Predeger heard rustling but thought it was the neighbor going to work. Then the moose appeared. He was sniffing the children in the tent, pushing the mesh sides in, trying to get a little closer.

“I woke up at 7 am to a large bull moose sniffing my 6 year old neighbor’s son (Elias Terland). The moose took four tight laps around our mesh-sided tent before walking down the street.”

Meanwhile, Predeger’s husband, Graham, and the neighbors were watching from their houses.

“I just kind of laid there, watched and waited,” said Predeger. “I was afraid that the kids might wake up and scream.” They didn’t.

The moose was there for 15 to 20 minutes. Everyone involved is pretty moose savvy, so the adults watching from the houses knew staying quiet and calm was the best option. Through it all, the Predegers were texting,

“My husband was talking me down,” keeping her from panicking, Hannah said.

After the moose moved on and the kids finally roused; it was time for waffles.

Hannah Predeger wrote in an email, “We showed them the pictures at breakfast. Elias’ dad said, ‘I think you have snot in your hair.’ Then we explained it was probably moose snot. They were all pretty excited about it.”

Quinn Predeger, 6, had the idea for the campout in the first place. She was pretty excited that she slept through it all, her mom said.

In the end, Predeger said, “nobody was shaken up but me!”