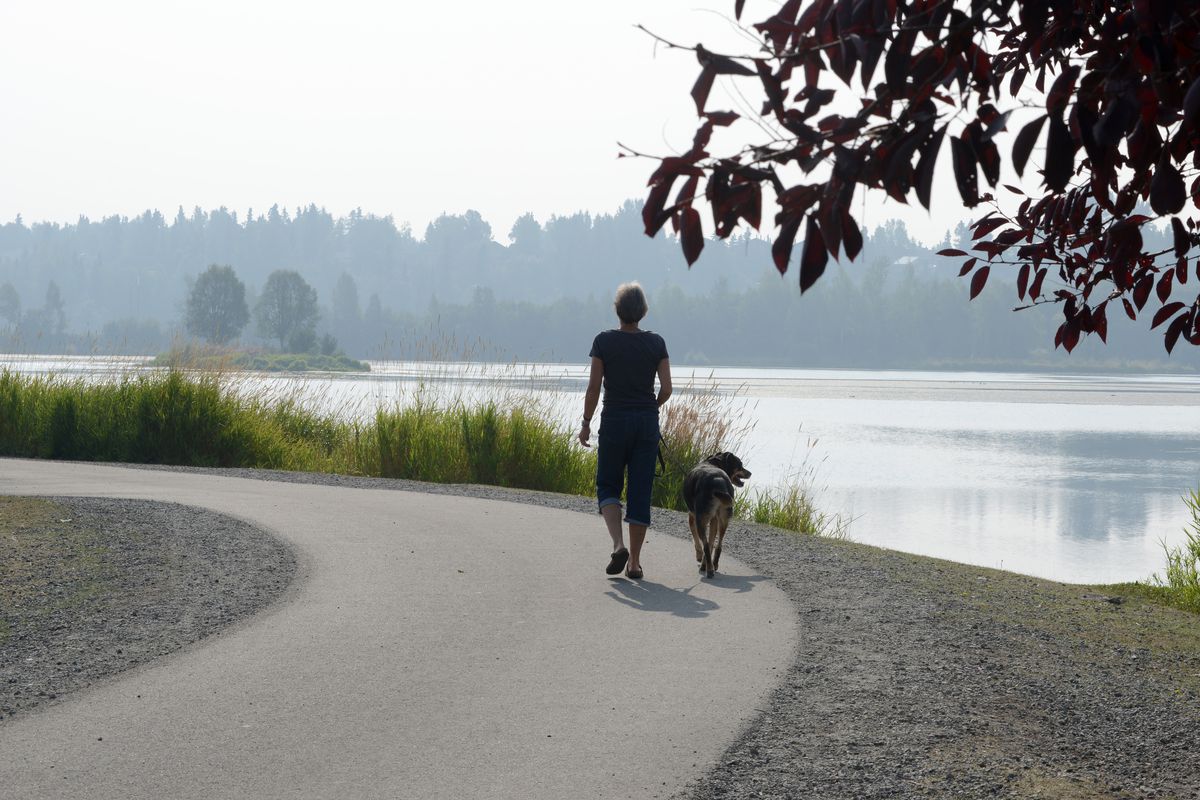 Deena Mitchell walks her dog Kobe by Westchester Lagoon on Friday. Anchorage has an unhealthy amount of smoke in the air from wildfires, Aug. 23, 2019. (Anne Raup / ADN)

Deena Mitchell walks her dog Kobe by Westchester Lagoon on Friday. Anchorage has an unhealthy amount of smoke in the air from wildfires, Aug. 23, 2019. (Anne Raup / ADN)

Wildfire smoke is again drifting into the Anchorage area and is expected to stick around, in patches, through much of the workweek.

“Smoke is going to be in the area pretty much through Wednesday,” said Lucas Boyer, a meteorologist with the National Weather Service’s Anchorage office.

Will it be as smoky as last week, when outdoor recess and after-school sports events were canceled for Anchorage School District students?

Most of the smoke is coming from the Swan Lake fire, a behemoth 148,000-acre blaze burning on the Kenai Peninsula.

The big variable is that changes in fire behavior can dramatically change how much smoke is being sent into the air. Winds that deliver it to Anchorage can change quickly too, Boyer said.

The intensity of the smoke this week will be “hit or miss” depending on winds and fire behavior, he said.

On Thursday or Friday, there’s a small chance of rain that could -- emphasis on could -- help to dissipate smoke.

“With this persistent dry pattern we’re in expecting large volumes of rain to wash it out is probably wishful thinking,” Boyer said.

No measurable rainfall has fallen at the official record station at the Anchorage Ted Stevens International Airport since July 28. Anchorage is officially in an “extreme drought,” according to the U.S. Department of Agriculture’s classification.

Typically by this point in August alone the city would have received an average of 2.54 inches of rain.

The Alaska Department of Environmental Conservation issued an air quality advisory Friday for Anchorage, the Kenai Peninsula, the Susitna Valley and the Copper River Valley, warning that southwesterly winds could push smoke from wildfires into the area, degrading air quality.

The advisory is in effect until Monday night.