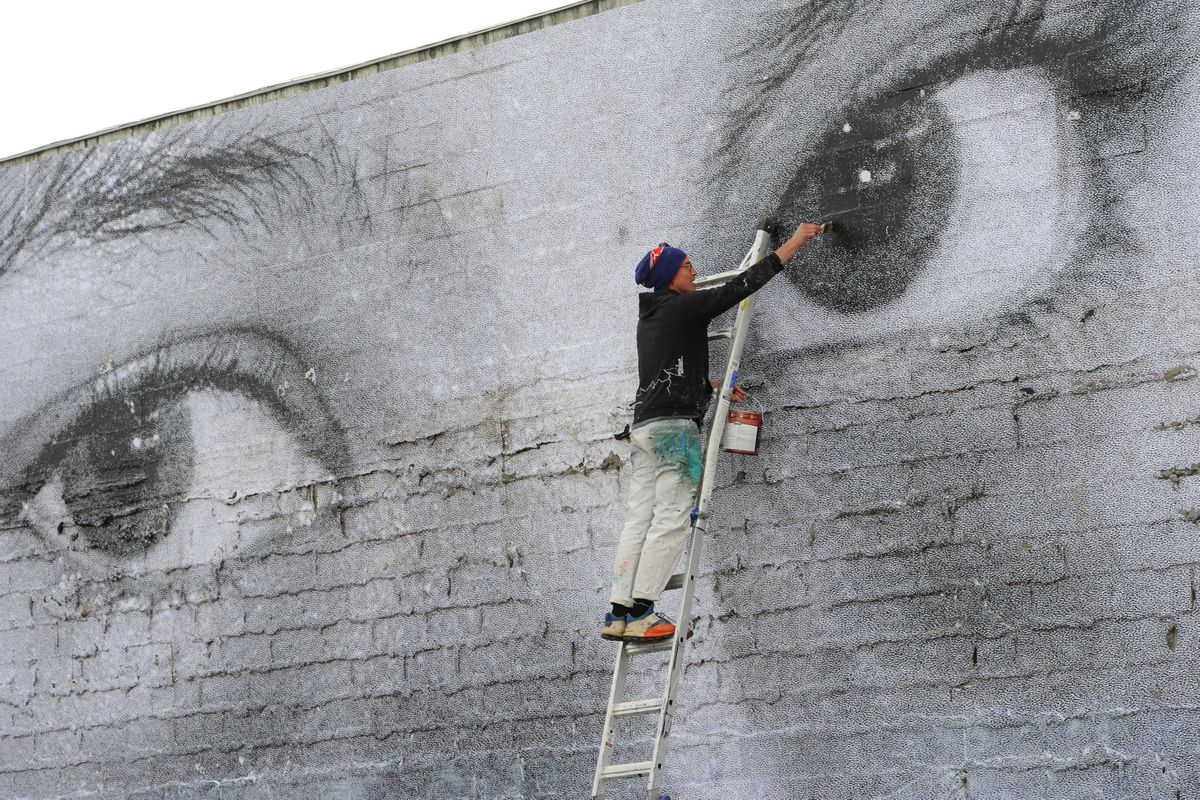 Artist James Temte touches up a wheat paste mural installation of a photograph by Michael Conti on a building next to the vacant lot where the Paradise Inn once stood in Spenard on Sunday, Sept. 22, 2019. (Bill Roth / ADN)

Artist James Temte touches up a wheat paste mural installation of a photograph by Michael Conti on a building next to the vacant lot where the Paradise Inn once stood in Spenard on Sunday, Sept. 22, 2019. (Bill Roth / ADN)

A 50-foot long pair of eyes now gaze over a storied corner of Anchorage’s Spenard Road where the Paradise Inn once stood.

On Sunday, Anchorage artist James Temte and photographer Michael Conti finished a huge wall-sized mural, a pixelated photograph of the searching face of a woman.

The Paradise Inn, at the corner of Spenard Road and 30th Avenue, was once the home of an iconic palm tree neon sign and a draw for tourists. It later became an underworld haunt known for drugs.

The hotel and cocktail lounge shut down after the owner was charged with selling a pound of meth to an FBI informant in the hotel’s basement.

Berger said the mural is meant to provoke conversations about the Paradise Inn and the history and future of the neighborhood, in an area struggling with blight and crime but also home to families, small businesses and enterprises like a gardening collective.

“Everything that’s good and bad about our community is happening right here on Spenard and 30th,” Berger said.

Temte and Conti worked together to find an image that seemed appropriate for the space. They settled on the idea of eyes.

“In the history of this space, with the Paradise Inn, there was a lot of trafficking, drugs, stuff that went on,” Temte said. “I thought the eyes were really powerful.”

Conti found a portrait he’d taken in 2012 of a UAA student named Christina Adams, where he was a longtime adjunct professor.

“She just stepped into this band of light across her eyes,” said Conti. “I knew I had to take her picture.”

The duo printed the selected image on individual panels to cover most of the wall, which is about 50 feet long and 20 feet high.

They used a technique known as “wheat paste” to affix the art to the wall, essentially gluing it with a waterproof polymer.

In places the rough texture and patches of tar on the original wall show through.

“We wanted to work with the wall, leave some of the history,” he said.

The installation started Saturday morning and finished Sunday. Berger dropped by with pizza. She eventually plans to turn the lot into a parking area.

He is the founder of the Alaska Mural Project, a business he hopes can connect property owners with empty walls to artists eager to fill them. He sees mural-rich cities like Miami and Philadelphia as a model for what public art could do for Anchorage.

“Anchorage has a lot of wonderful blank walls,” he said.