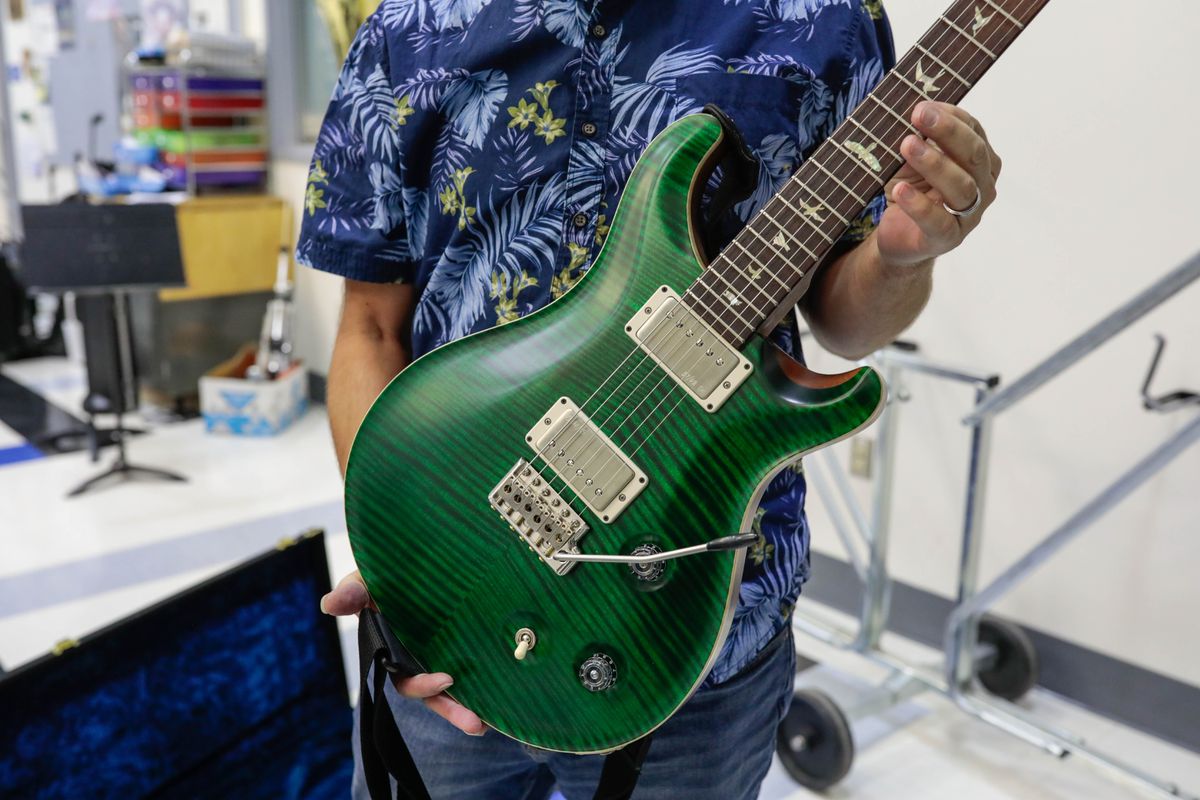 When Bruce Wood, fine arts director for the Anchorage School District, started unpacking a set of cardboard boxes donated by the U.S. Fish and Wildlife Service, he didn’t know what to expect.

He was shocked to open the first box, unlatch the case inside and find a handmade, high-end Paul Reed Smith electric guitar with pearlescent bird inlay and Brazilian rosewood detail. There were nine more cases.

“For the next 45 minutes our jaws were on the floor opening all 10 of these,” he said.

Together, the guitars are valued at nearly $54,500, according to the school district.

Fish and Wildlife intercepted the instruments in Anchorage in July 2018, said Chris Andrews, supervisory inspector with the federal agency. The guitars, commercially shipped from the East Coast and bound for Hong Kong, were declared as clothing. When wildlife inspectors opened the cases, they found the instruments without required permits, he said.

The guitars feature Brazilian rosewood — protected by an international treaty — and can’t be exported without permits, Andrews said.

(In 1992, prompted by overharvesting, the Convention on International Trade in Endangered Species of Wild Fauna and Flora listed Brazilian rosewood under the highest level of protection. Trade restrictions on the wood remain in effect.)

Each triggers a specific process. With the 10 guitars, Fish and Wildlife started a civil forfeiture proceeding, and the instruments were eventually given up. Andrews said a guitar dealer shipped the instruments, not the manufacturer. He declined to name the dealer.

“Who knows how many times they’ve been passed around by the time the dealer got hold of them,” he said.

There’s a structure in place to find new homes for forfeited items, Andrews said. First, Fish and Wildlife looked at whether another federal agency could use the guitars. Then it looked at donating or loaning them to a nonprofit.

Last week, the Anchorage School Board officially accepted the donation to cheers and applause. Wood hoisted a red and black guitar over his head to show the room.

“Paul Reed Smith makes guitars for Santana and, I mean, he makes the best in the world," he told the school board, "and we now have 10 of them in our district.”

Andrews said the guitars are donated for the school district to use, but they’re still technically Fish and Wildlife property, so the district can’t sell them.

The district has given eight of the guitars to jazz bands at high schools. Another guitar went to the district’s only full-time guitar and ukulele teacher, East High’s Kiel Schweizer. One will stay in the fine arts department as a loaner for special occasions at other schools, Wood said.

Schweizer described the tone of his classroom’s newest addition, a Paul Reed Smith Modern Eagle, as richer and deeper than others in the school’s collection. He now has 16 electric guitars in his classroom, he said, a collection built with the help of other donations.

East High’s two new electric guitars will stay locked away from other instruments when not in use, he said. The district also has a humidifier for each guitar and “really good straps and strap locks,” Wood said.

“We want to make sure we take care of our resources,” he said. “At the same time, they’re made to be played, they’re not meant to be in a museum.”

In addition to music, Andrews hopes the guitars teach students other lessons, including the story of where they came from, he said. He told the school board that in terms of value, the illegal trade of products made from endangered species like Brazilian rosewood falls just behind the trade of illegal drugs and firearms.

“I hope our conservation efforts help make sure that, in the future, these are still being made,” Andrews said.

Will Ingram, a general manager of Petr’s Violin Shop & Guitar Central in Anchorage, said Maryland-based Paul Reed Smith is a famed guitar manufacturer. The guitars donated to the school district are unique and custom-ordered. He likened them to a Rolex watch or an expensive car.

“Those kids have something that’s really amazing,” he said. “It’s the equivalent of ‘OK, kids, you’re going to learn how to drive, here’s the keys to a Lamborghini.’”