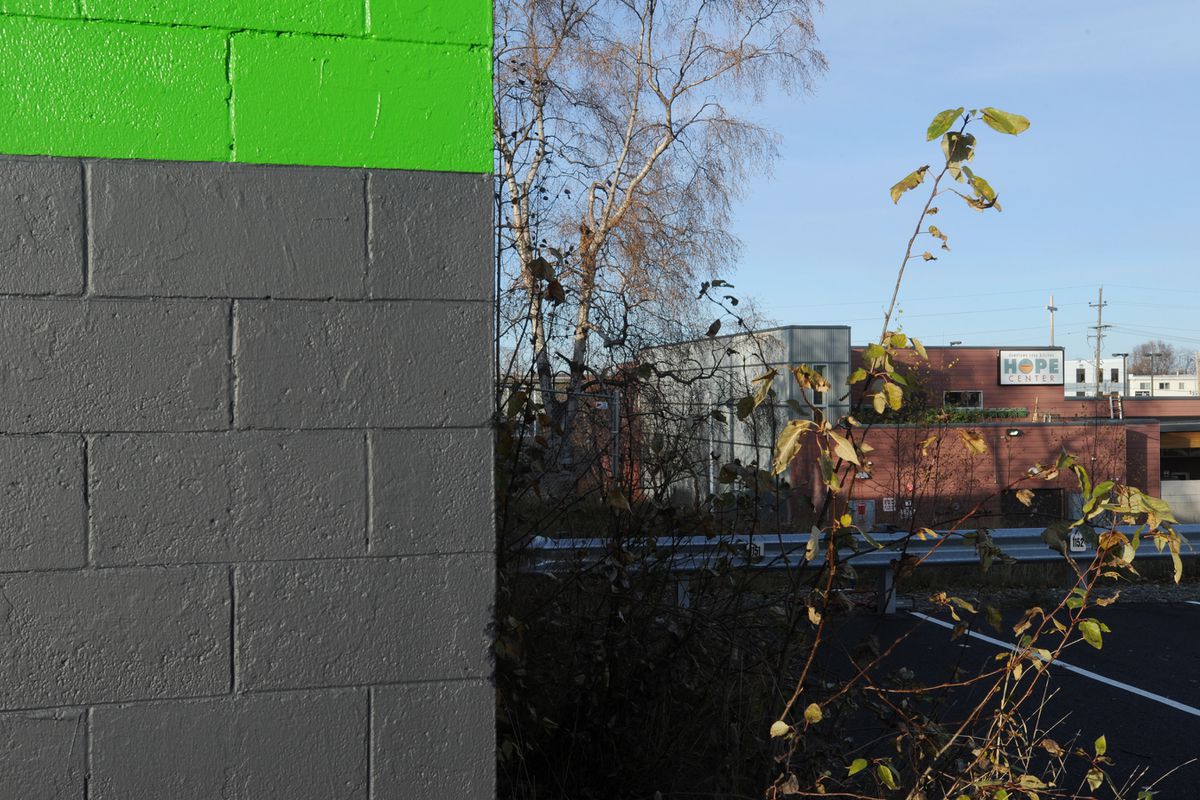 Alaska Sense wants to open a retail cannabis business on 4th Avenue but a neighboring soup kitchen, at right on 3rd Avenue, has secured a religious designation to prevent the store from opening. Photographed on Thursday, Oct. 17, 2019. (Bill Roth / ADN)

Alaska Sense wants to open a retail cannabis business on 4th Avenue but a neighboring soup kitchen, at right on 3rd Avenue, has secured a religious designation to prevent the store from opening. Photographed on Thursday, Oct. 17, 2019. (Bill Roth / ADN)

Tuesday, the Anchorage Assembly will vote on whether a marijuana business will be allowed to open up a downtown retail operation next to a women’s shelter which includes a church.

It might seem mundane — the Assembly often takes up marijuana retail licenses — but this decision is steeped in recent controversy and could set the table for a lawsuit against the city.

For years, the soup kitchen vociferously opposed a new marijuana shop coming in. Then, an hour before the Anchorage Assembly held a work session on the issue Friday afternoon, the soup kitchen sent a letter to AlaskaSense’s attorney saying its board voted unanimously to no longer oppose the weed shop.

However, after fighting and obtaining a religious designation from the city to stop the shop from opening up, the damage may well be done. The city’s senior planner, Ryan Yelle, told the Assembly Friday that whether neighbors support or oppose the business is irrelevant: It shouldn’t be allowed to open up within 200 feet of a church.

But the Assembly is potentially a more swayable body than a planning department relying solely on code, and could theoretically break away to approve the retail operation. Several members peppered planning officials with questions Friday, and seemed genuinely confused with how the process has gone.

AlaskaSense’s owner and her lawyer say they continued to move forward and spend $400,000 in rent and renovations based on assurances from the city. But city officials now say opening the business violates code protecting certain establishments, such as schools and churches.

The soup kitchen and women’s shelter leases space to a Texas ministry called Hope Church and provides religious services. That led the city’s planning department in June to deem the entire operation a religious assembly, giving it special protection from nearby marijuana businesses.

That late change could prove fatal for AlaskaSense’s plans, and its owner Smadi Warden is crying foul and threatening to sue the city.

“The whole thing just blows my mind,” Warden said. "The original approval, it just went smooth, and there has never been a question about if the Hope Center was a church. For three years I’ve been paying the rent, trying to get this thing moving.”

For years, city officials said that the nearby soup kitchen didn’t qualify as a protected area, meaning a marijuana businesses can operate within 200 feet of it. City measurements put the AlaskaSense location 55 feet from the Hope Center property line, meaning the new designation stops Warden from opening at the proposed location.

“They fought as a soup kitchen, then they lost the fight,” Warden said. "Now they are coming back in a different way and they call it a church.”

Jana Weltzin, Warden’s attorney and an experienced marijuana lawyer, said the city provided as much assurance as you could ask for.

“I felt pretty confident," Weltzin said. "It was crazy to us that they flipped their determination.”

Yelle said the city did previously tell Weltzin and Warden that Hope Center wasn’t entitled to any protections, but at the time the city wasn’t aware of the church services Hope Center provided. He and planning director Michelle McNulty say they never provide assurance, and it’s up to the business to understand the risks.

On May 4, 2016, Warden started leasing the building on Fourth Avenue. That same day, the Hope Center sent a letter to the Downtown Community Council opposing the proposed business. The letter cited code that the business was going in too close to a homeless shelter, but did not argue that Hope Center was a church. Due to where the shelter is zoned, it does not get the shelter protection.

The Hope Center sent a second letter to the council on Oct. 7, 2016, again arguing that a marijuana business would hurt its clients’ sobriety efforts.

In 2017, AlaskaSense started the permitting process with the state, marking the beginning of the process in the city’s eyes.

On June 5, 2019, the community council recommended the Assembly approve the permit with a 11-2 vote. However at 4:58 p.m. the day before, McNulty designated Hope Center as a church.

Hope Church had a lease with Hope Center dating back to 2016, meaning its standing as a church came before AlaskaSense’s 2017 state application.

Assembly member Forrest Dunbar was confounded by this. In the city’s eyes, the process doesn’t start until an application is filed with the state. But the Assembly has asked prospective marijuana businesses to be transparent and work with their community council as early as possible. AlaskaSense did that, and it appears to have tipped off the opposition, Dunbar said.

“Suddenly one of their rooms was turned into a church, he said.

On July 23, armed with a do-pass recommendation from the Downtown Community Council, Warden officially applied for her retail license. Now, Warden is seeking a variance from the ordinance protecting churches from marijuana retailers — something the Assembly has never granted.

Warden and Weltzin allege Hope Center is pulling a fast one. Just weeks ago, the city paid out a $100,001 to settle a lawsuit against Hope Center. Warden believes that situation has impacted the decision to approve her permit.

"I am right smack in the middle,” Warden said.

Hope Center Executive Director Sherrie Laurie rejects that assertion, saying the operation is clearly a religious one and the city is just following protocol.

“We have crosses on the building, signs in the windows, and they are trying to say there’s no church,” Laurie said. “There’s a reason why the city planners made these laws. They shouldn’t be violated.”

Laurie said in the middle of the day, there could be 500 people around the Hope Center, many being drug addicts working toward recovery. She expressed fear drug dealers will buy marijuana at a store, cut it with other drugs and then sell it to her clients who are working toward a better life. There are already 12 marijuana stores within a mile radius of Hope Center, she said.

“We end up with drug dealers hanging outside the fence here, so having (a retail location) in the backyard is not conducive," she said.

When asked by ADN on Friday why her board changed their minds about opposing the business, Laurie declined to answer. She also declined when asked by an Assembly member, and opted instead to read the letter she sent to the Assembly aloud. The letter states the Hope Center still opposes the expansion of marijuana businesses in the downtown area, but will no longer oppose AlaskaSense.

Days before, she pointed to missteps at Warden’s original Cannabaska location on Tudor Road. More than a year ago, the state shut down Cannabaska for nine days after marijuana was found on the ground near the dumpster, and Warden was accused of not paying more than $100,000 in taxes.

Warden said none of the mistakes were malicious and shouldn’t continue to haunt her.

“It was mistakes of my employees, but I fixed it all," she said. "I fired half of my team. I paid my dues. They can’t drag a mistake that happened a year and a half ago forever and ever.”

Laurie said in the past, Hope Center has been interested in leasing the building on Fourth Avenue for a bakery. She said they might still be interested in doing that, if Warden’s marijuana business falls through.

Emails between McNulty and Weltzin show that in May, a man named Ray Kreig was the first to implore the city to designate Hope Center as a church on May 25. The lease with Hope Church has existed since 2016. McNulty cited Kreig’s email in explaining to Weltzin how she decided to change the designation in favor of Hope Center.

On May 31, McNulty responded saying Hope Center doesn’t qualify as a religious assembly because it doesn’t hold worship services.

Kreig sent a picture of a window sign advertising a Sunday church service, and on June 4 McNulty responded that given the additional information, she will designate the shelter as a church.

According to city code, a church needs to be the “primary” use of an establishment in order to be designated a religious assembly. Weltzin argues the primary use of Hope Center is as a soup kitchen and overnight shelter.

McNulty disagrees, saying there could be multiple primary uses. Since the church services are open to everyone and not just people using the shelter, it is a primary use.

On Friday, Weltzin argued against that idea, saying that Hope Center only provides church services for two hours per week in the dining room.

Russ Reno, a member of the Downtown Community Council, emailed the Assembly this week in a personal capacity. Speaking for himself, he argued the Hope Center should have never been designated as a church. Now, he said, the Assembly is forced into stifling business because approving a variance isn’t appropriate.

“If we allow this to go forward unchecked, then in my opinion, we open ourselves up to anyone simply asking a church to move into their mixed use property to stop an applicant," Reno said in his email. "That is, if they have the right person to call at Planning and Zoning. With all respect, this is how it appears to me.”

Weltzin said the idea that a marijuana business moving into a vacant building would somehow contribute to blight in the area is absurd. Warden says she invested about $200,000 in building repairs and will install cameras and lighting, helping to control some of the issues brought in with homeless population served by the Hope Center, including littering and public defecation.

“We’re not the problem, we are part of the solution," Weltzin said.

For the Assembly were to go against the planning department and grant the variance, it is supposed to determine that the business will never cause any harm to its neighbors. Several members complained that the standard of clairvoyance was far too extreme and hurts businesses.

Note: An earlier version of this story incorrectly stated the process for opening a marijuana retail operation. Prospective businesses are asked to present before a community council, but do not need the council’s approval to go before the Anchorage Assembly, as the article previously stated.