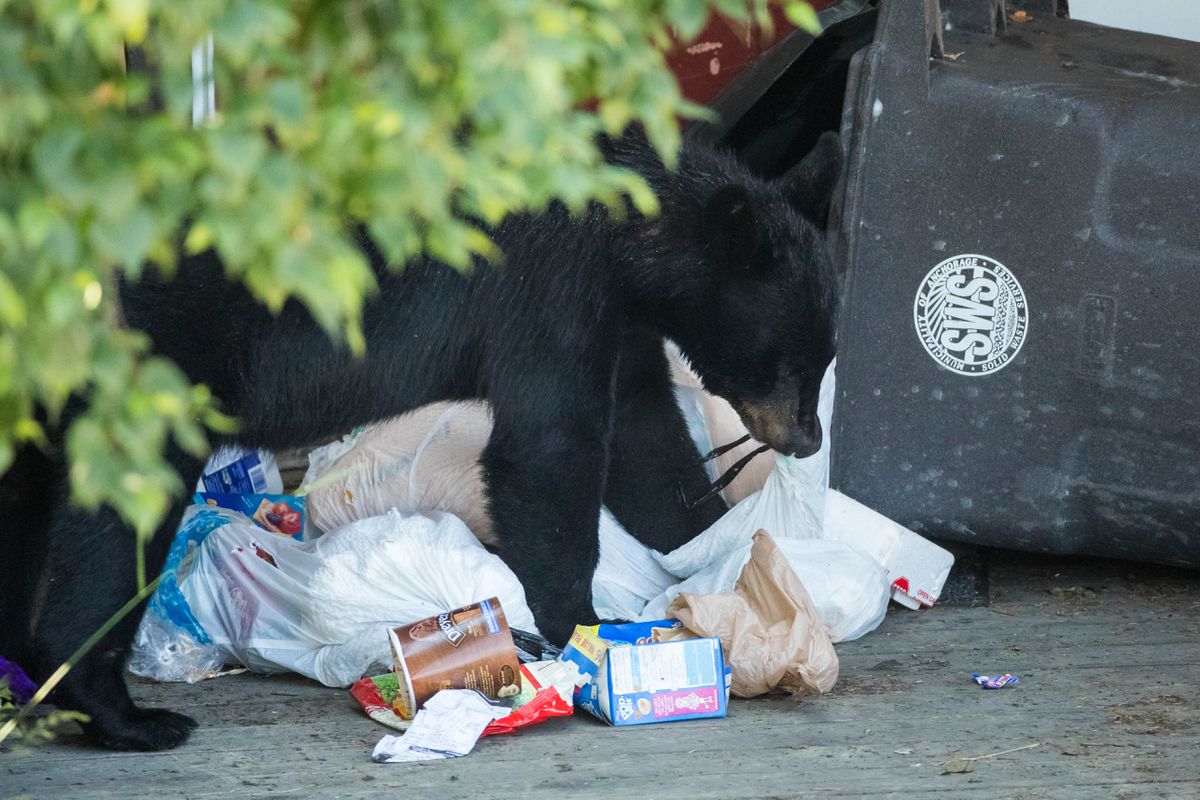 A young black bear pulls out trash from a trash can in Fairview on July 12, 2017. (Loren Holmes / ADN archive)

A young black bear pulls out trash from a trash can in Fairview on July 12, 2017. (Loren Holmes / ADN archive)

It was a good summer to be a bear in Anchorage, where far fewer bruins were killed due to conflicts with humans.

According to the Alaska Department of Fish and Game, just six bears were killed by either the government or by private citizens defending life or property. That’s a dramatic decrease from the record summer of 2018, when 42 bears were killed.

“Compared to other years it was like being on vacation,” said Fish and Game area management biologist Dave Battle.

The six bears killed this summer include two brown bears shot by state agencies and four black bears killed by private citizens. One brown bear was killed in South Anchorage, with the other five kills taking place in the Eagle River area.

There have also been no humans killed by bears this year in Anchorage, which saw one fatal mauling in both 2017 and 2018. Prior to 2017, the last fatal bear maulings in Anchorage occurred in 1995, when two runners were killed on the McHugh Creek Trail.

Bear kills fluctuate wildly in the Anchorage area, which stretches from Girdwood to Eklutna and is home to thriving populations of both black and brown bears. In 2017, 34 bears were killed — but just nine were dispatched in 2016.

Battle said this summer’s low kill numbers could be due to a combination of factors, including an abundance of food in the woods (bears are seasonal omnivores who feed on everything from grasses and berries to moose calves and salmon) and the possibility that many problem bears were removed from the population over the previous two years.

“If there was enough for them to eat in the woods, we don’t see as many of them coming into town to eat trash,” he said.

As for the idea that many mischievous, trash-seeking bears have been removed from the city, Battle said “killing bears is not a long-term solution” to conflicts between humans and wildlife. If people don’t properly secure food sources — trash is the biggest attractant in the city — Battle said more bears are likely to die.

“If people don’t change their behavior, we’re just going to see a whole new crop of bears getting into conflicts with people,” he said.

Battle said a new ordinance passed by the Anchorage Assembly earlier this year that imposes more strict rules for trash handling was a step in the right direction.

“The new ordinance certainly has the potential to change things,” he said.

Eklutna Valley on board with new ordinance

One area hoping to get ahead of the curve is the Eklutna Valley, where residents are already asking to be included in a “secure trash regulation zone” under the new law.

Earlier this month, Eklutna Valley Community Council members passed a resolution asking for inclusion in the zone. The more restrictive rules within the zone would require trash to be stored indoors or in bear-resistant trash containers.

The valley is sparsely populated and includes vast areas of backcountry within Chugach State Park. In its resolution, the council noted the area’s rural character and high number of bears as good reasons why the strict trash rules should be imposed.

“We have every reason to believe the Eklutna Valley is populated by more bears than people, bears are often seen by residents and visitors, and residents with improperly secured trash have attracted bears,” reads one passage.

In June, the assembly unanimously passed a new law that makes it easier for the municipality to enforce trash violations and includes new fines for people who attract bears with their garbage. It also includes a provision for the secure trash zones, which can be designated by the assembly in areas deemed to have a high likelihood of wildlife-in-trash hazards. In July, the assembly designated Girdwood as the first Secure Trash Regulation Zone, and in August that community became the first area in the municipality to formally require that all trash containers be bear-resistant.

Other provisions of the new law go into effect March 1.

Clarification: This story has been updated to add that Girdwood was previously designated a Secure Trash Regulation Zone.