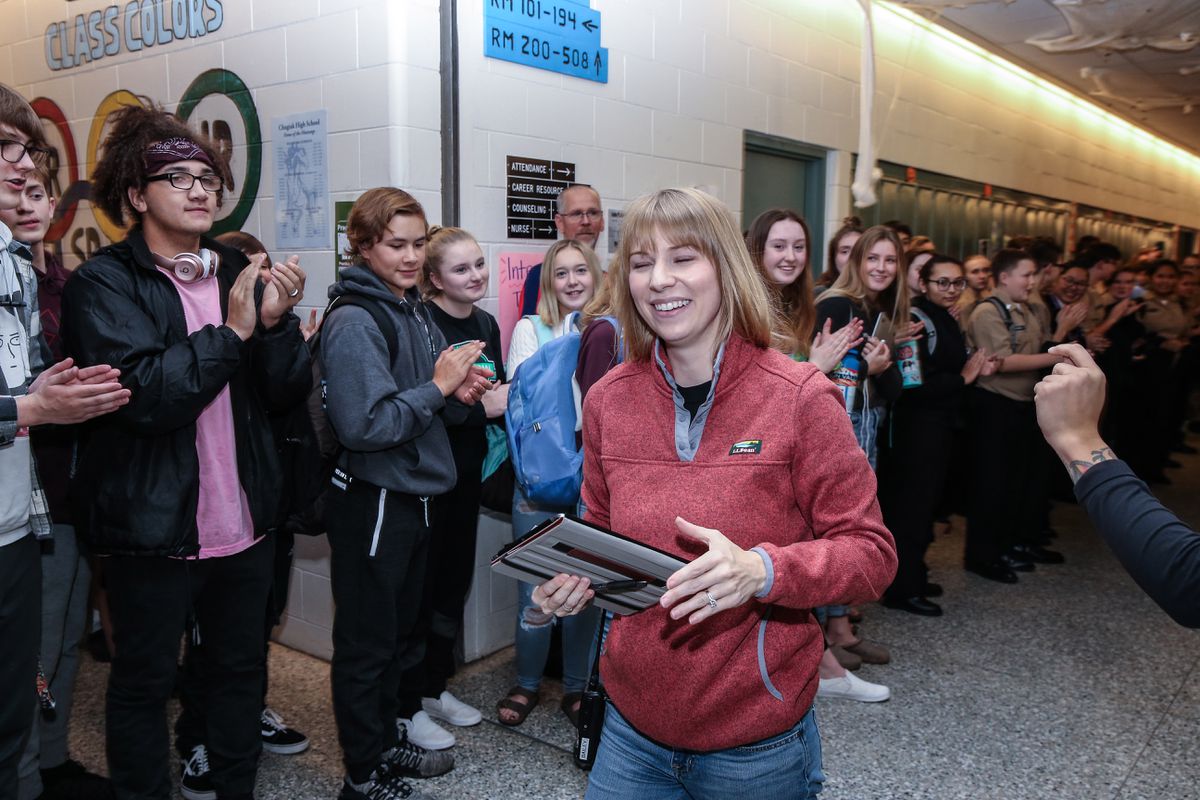 Ashley Bailey gets cheered on by students and faculty at Chugiak High on Oct. 17. Bailey is a security guard at the school who recently took leave to undergo treatment for breast cancer. On her last day, students and teachers lined the halls to lend her their support. (Photo by Scott Minor / Fitzgerald Photography)

Ashley Bailey gets cheered on by students and faculty at Chugiak High on Oct. 17. Bailey is a security guard at the school who recently took leave to undergo treatment for breast cancer. On her last day, students and teachers lined the halls to lend her their support. (Photo by Scott Minor / Fitzgerald Photography)

EAGLE RIVER — At Chugiak High School, they’ve got a nickname for Ashley Bailey, the steely-eyed security guard who stalks the campus with the vigilance of a junkyard dog that ain’t been fed.

Bailey has a reputation as someone who doesn’t take a lot of guff. Hatswell said the military veteran is fierce but fair — traits that have earned her grudging respect from the students she oversees.

“She is a fantastically amazing security guard,” Hatswell said. “She understands kids and she doesn’t let you get away with things.”

Bailey plans to bring that same doggedness to the biggest battle of her life. On Sept. 20, the mother of two was dealt a devastating diagnosis when she got the call you don’t want to get.

It was her doctor. The biopsy results were back. Breast cancer. Gut punch. She could have broken down then — anyone would. But after hanging up, the Bulldog took a deep breath and went right back to work.

“I pulled myself together and finished out the day, then went home to my kids and started the process,” Bailey said last week.

A 2006 Chugiak High graduate who has an 8-year-old son and 6-year-old daughter with her husband, Dan (an ’04 CHS grad), Bailey said her reaction was to attack the situation with blunt force.

What she did next was fight.

Bailey’s battle began like a lot do, with a lump she wanted to ignore. The busy mom discovered something irregular in her breast, but put off going to the doctor in hopes it was nothing.

So Bailey made an appointment to have the lump checked. At first, she said, her doctor couldn’t even detect it. But an ultrasound showed something was there, and a biopsy was ordered. The doctors said she’d probably hear back in two or three days. They called the next day.

Doctors told the 32-year-old she had invasive ductal carcinoma, which according to Johns Hopkins Medicine is the most common form of breast cancer; a type of cancer that begins in the milk ducts and spreads to nearby fatty tissue, the cancer represents about 80% of all diagnoses. But ultrasounds and a subsequent MRI showed two large masses would need to be removed, and a double mastectomy was scheduled for Oct. 24.

Bailey said a lumpectomy — which removes the cancerous growth but not the entire breast — was not an option. The tumors were too large, she said, and she’d known other women who had poor outcomes by trying to save tissue.

“We have two kids and I want to be there for them,” she said.

It was an easy decision to make, one she accepted with customary bluntness.

“They’re not going to be able to save anything,” she said. “Mentally I’m OK with it.”

Her spirit’s been buoyed by her husband, who has been at every appointment peppering the doctors with questions, and she’s drawn strength from the fact that he’s not concerned with what she’ll look like later but the person she is today.

“He cares about me and not my body parts.”

It hasn’t been all bad news. The MRI showed the cancer hadn’t spread past the chest wall, and testing indicated the genetic mutations that caused the cancer aren’t likely to cause the cancer to spread to her ovaries or uterus, which was initially a concern. Bailey won’t know for sure whether she’ll need chemotherapy until after post-surgery follow-ups, but she will have to go on hormone therapy for five to 10 years to suppress her natural estrogen production.

It’s all been a lot to take in. But Bailey said she’s attacked the problem head-on in part because she knows she’s a role model to the students at her former school, and she wants to show them how to overcome even the most snakebit of circumstances.

“I want to be a good example that even if something bad happens to you, you can still come through it,” she said.

As a Chugiak student, Bailey was one of the school’s more visible students — an athletic cheerleader, member of the yearbook staff and winner of both the “Finest Physique” and “Super Shy” senior superlatives. As a security guard, Bailey is still one of the most visible people in the hallways, but she’s also occasionally cast as a villain. She said she knows she has a reputation as a hard-ass, but finds her job incredibly rewarding because it gives her a chance to make a difference in students’ lives on a personal level.

“I really love my job,” she said. “I get to know all the students, both ones with struggles and the ones without.”

She said she struggled with the decision of whether to share her situation with students by disclosing her diagnosis. But ultimately she decided it was worth the risk if she could help spread awareness and positivity in the face of ignorance and pain.

“Being in discipline, my message is it’s your actions that make a difference,” she said. “I decided to tell the students because they should know why I wasn’t there.”

On her last day before taking leave to prepare for surgery, Bailey and her security colleagues were holding their customary meeting before the end of school. Hatswell joined them.

“We want you to know the staff has your back. But not only the staff but all the students,” she told Bailey.

Bailey was touched, she said; it was a nice sentiment to end the meeting on. Then Hatswell opened the door.

Lining the hallways of Chugiak High was the entire student body — a motley crew of Mustangs good, bad and awkward — standing and cheering in support of their beloved Bulldog. Then the choir rolled a baby piano into the hallway and serenaded the security guard with One Republic’s “I Lived” as she walked through a sea of hopeful faces.

“I try not to cry in front of the students, but …”

Hatswell said the sendoff was the school’s way of showing its solidarity.

“One of the things I love the most about Chugiak is the community,” she said. “We’re part of your family. We wanted her to know there’s a thousand of us and we’re all behind you. We’re one community and we all have to stand together.”

Bailey underwent surgery Oct. 24. She’s now at home resting up for the next chapter in her story. Her doctors say it could be six weeks before she’s ready to go back to work, but she said she’s “shooting for four.”

Bailey’s parents and Dan’s mom still live in Eagle River, so there’s plenty of family around to help out, and friends set up a meal train to help keep the family fed. People have been constantly asking how to help, but for now she’s not really sure what she’ll need as she begins what’s expected to be a four- to six-week recovery from surgery.

For now, folks who want to keep up with Bailey’s recovery can follow her progress on a blog she’s set up on Caringbridge.org.

Hatswell said students have been making cards for Bailey — many of them featuring hand-drawn cartoon bulldogs — in an effort to show their love. The thing they want Bailey to know the most, she said, is that they’re behind her.

“We want her to know she’s not going through this alone,” she said.

“One student said they were going to save some detentions for me,” she said with a laugh.