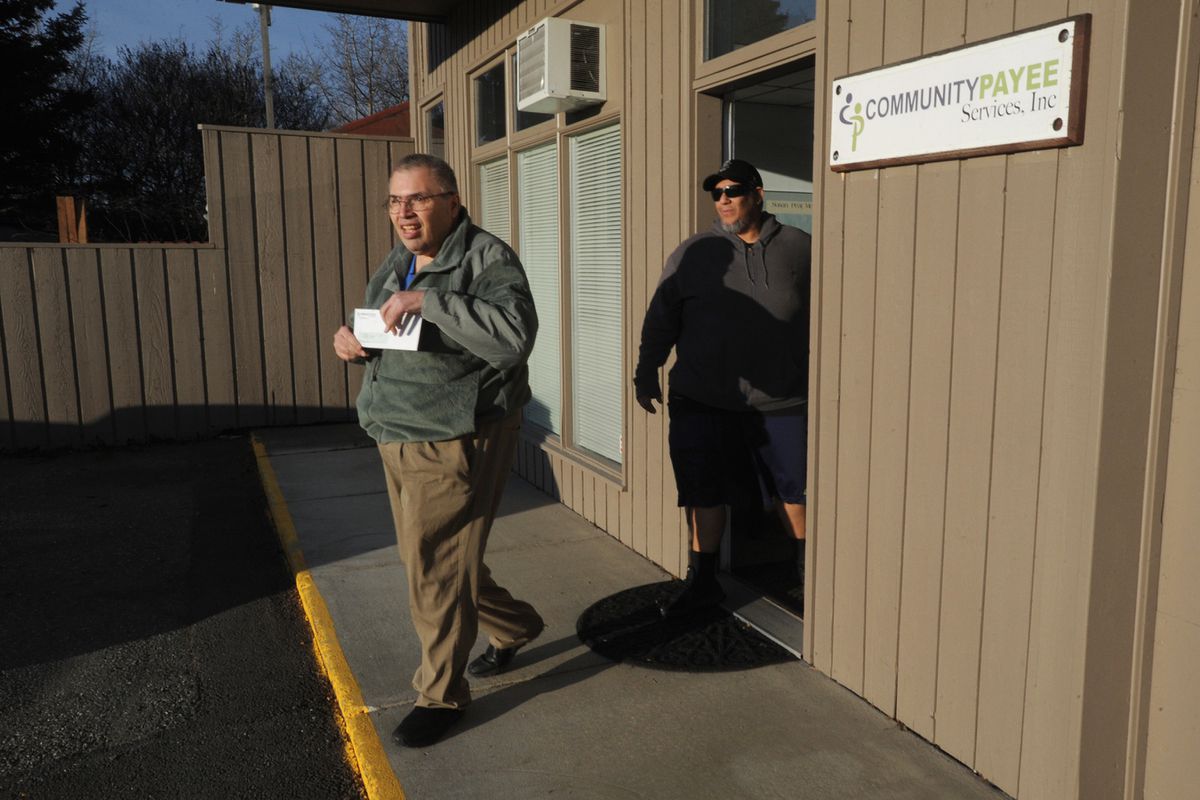 Ron Barlip picked up a benefit check at Community Payee Services in Spenard on Tuesday with the help of Tony Lopez, a direct support professional at HOPE Community Resources. (Bill Roth / ADN)

Ron Barlip picked up a benefit check at Community Payee Services in Spenard on Tuesday with the help of Tony Lopez, a direct support professional at HOPE Community Resources. (Bill Roth / ADN)

On Tuesday morning, Ron Barlip stopped by a sunny Spenard office to pick up a check. It was time to buy some new clothes, towels and shoes with a portion of his monthly Social Security money.

Barlip, who experiences an intellectual disability, is one of hundreds of Alaskans who rely on private businesses known as “representative payees” to manage their money.

For a monthly fee of $85, Community Payee Services owner Vicki Jorgensen receives all of Barlip’s income from Social Security and other benefits and controls his modest finances. That means paying his rent, making sure he has money for groceries, helping him save for a long-awaited trip to Las Vegas, and more.

“To tell you the truth, I’m not that good with money,” said Barlip, a gregarious 56-year-old who has starred in HOPE Community Resources’ television commercials. "And if I see money, I will spend it all.”

But maybe not for much longer: The Social Security Administration is cracking down on Alaska’s unique for-profit representative payee businesses, saying they’ve been operating outside the law by charging fees.

For-profit payee services businesses have existed here since the 1990s. But federal regulators’ attention shifted to Alaska in 2018 after Congress passed a law that expanded monitoring of Social Security payees. This year, the Alaska businesses were told they would be audited and informed that their business model is illegal.

“Through our monitoring program, we have identified several for-profit representative payee organizations in Alaska that may be charging unauthorized fees,” said Ann Mohageri, a spokeswoman for the agency, in an email.

Businesses have been told to convert to nonprofits to comply with the law. As nonprofits, they would be able to charge clients no more than $43 per month in most cases, according to government regulations. That’s about half of what most already charge. A few have already closed. Others say they will need to soon.

“We have to shut down. We can’t do it for free,” said Terria Ware, who operates a representative payee business for about 80 people across the state.

Advocates say the crackdown will leave around 800 vulnerable Alaskans — people with physical or developmental disabilities, serious mental illnesses or age-related cognitive problems — with no one to manage their money.

There are no clear answers about what will happen next, or how soon, said Dave Fleurant with the Alaska Disability Law Center in Anchorage. But it’s clear that there are not enough nonprofit or government organizations to fill the gap.

“I’ve been trying to convey to the Social Security Administration for a while that this is more of a crisis than they see it as,” Fleurant said.

For people like Ron Barlip, the uncertainty is distressing.

“It’s going to change my life completely,” said Barlip. “Vicki has always been there for me.”

An obscure but crucial service for hundreds

Representative payees are obscure to the world outside of people who use them — but a crucial part of everyday life for hundreds of Alaskans who rely on them.

The system works like this: When a person qualifies for Social Security benefits because of a disability and doesn’t have the capacity to manage money themselves, the government designates another person or entity to receive the checks. In Alaska, people may also receive income from state public assistance, senior benefits, Permanent Fund dividends and Native corporation dividends.

The first choice is a willing family member or friend. But if someone suitable can’t be found, the Social Security Administration can appoint an organization to act as the person’s representative payee.

Years ago, Alaska nonprofits that provide services to people with disabilities acted as payees too, said Michele Girault, chief of staff at HOPE Community Resources. But most decided to get out of the business because it was seen as a conflict of interest for the same organization to handle a person’s housing, support services and money all at once, she said.

They have never been allowed to take their fees directly from Social Security dollars. Instead, the businesses have historically taken their fees from funds other than Social Security money, said Jorgensen — possible because of the other sources of benefits, such as the PFD, that Alaskans receive.

There are now more than a dozen payee businesses operating statewide. Most charge in the neighborhood of $70 to $85 per month. For people whose income must remain under $2,000 to stay eligible for benefits, that’s not an insignificant amount.

Ware pays her clients’ rent and utilities. But she also sometimes arranges for a cleaner to keep them in the good graces of landlords. For clients in places like Wrangell and Nuiqsut, she might pay a fuel bill or a village store bill — anything to keep their lives stable. For those who have jobs, she has to make sure their total income doesn’t top the amount that would trigger the loss of their benefits.

Many of her clients are likely to slip into homelessness if they are managing their own money, she said.

“My clients are like family to me,” Ware said. “I can tell you, with every single one of my clients, their whole story.”

Ware acknowledges businesses that control the finances of vulnerable people are ripe for exploitation and embezzlement, and says she’s not opposed to the 2018 legislation that increased monitoring.

Some representative payee businesses in Alaska have been shut down for stealing client money in the past, said Fleurant, of the Disability Law Center. But on the whole, the businesses in Alaska have a solid reputation, he said. Most of them are going “far and above beyond what would be expected for a representative payee” for their clients, he said.

The Social Security Administration hasn’t offered a clear timeline as to when the businesses need to switch to nonprofit status to comply with the law — or what will happen if they don’t.

That leaves business owners operating in an uncomfortable legal limbo.

“There’s nothing in writing saying, ‘If you charge a fee going forward we’re going to prosecute you,’” said Jorgensen, the payee services business owner. “It is a gray area.”

“Social Security has known about this. It’s been in effect for 20 years," he said. "They’ve been doing audits of people’s accounts for almost 20 years. So they have been aware.”

Fleurant and others suspect the Social Security Administration will likely reclassify many of the 800 people who could lose their payees, allowing them to receive the money directly. For some, that could be a quick path to disaster.

“If they go into direct pay they won’t pay their rent and will be evicted and homeless," said Fleurant, with the Disability Law Center.

Others may end up in much more restrictive legal status of public guardianship under the state Office of Public Advocacy — an agency already struggling with overwhelming caseloads.

The Social Security Administration said it is actively looking for new payees in Alaska.

But until there’s more clarity about who can do the job, and under what terms, Jorgensen and the others are weighing how much to tell clients.

“A lot of us are protecting them,” Jorgensen said. “We don’t know what to tell people.”