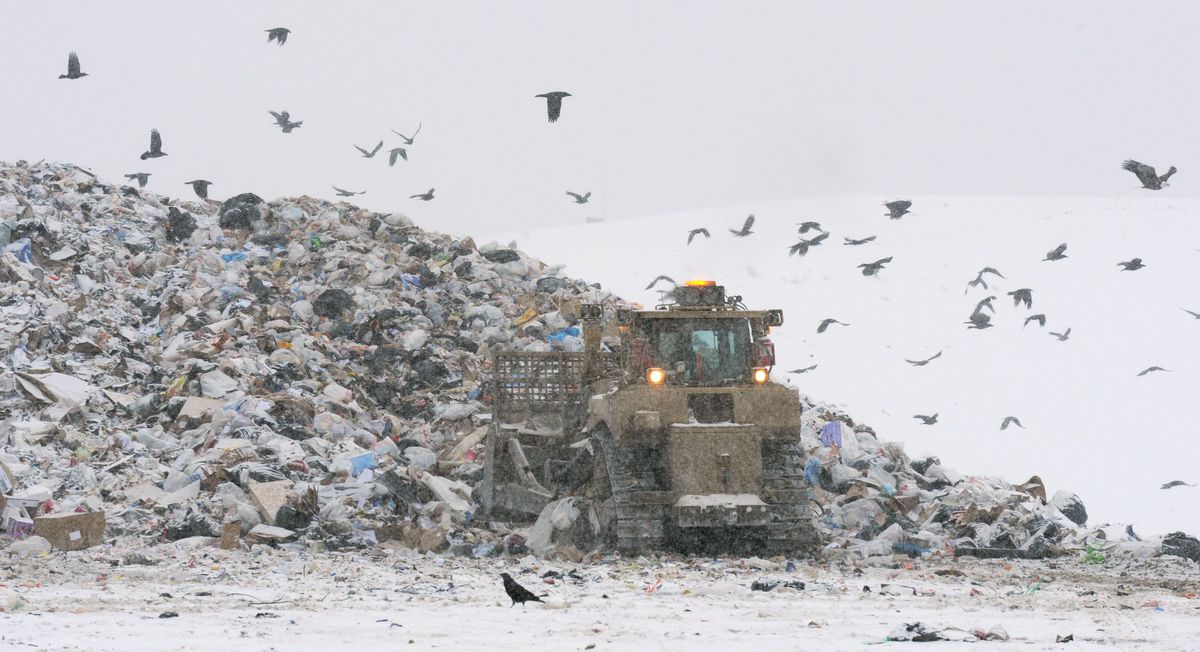 Bald eagles and ravens search for food in the Anchorage Regional Landfill in 2012. (Bill Roth / ADN)

Bald eagles and ravens search for food in the Anchorage Regional Landfill in 2012. (Bill Roth / ADN)

To solve a looming landfill capacity problem, Anchorage is looking to incineration as way to dispose of the city’s trash.

On Tuesday, the Anchorage Assembly approved the use of $100,000 to fund a plan to detail how the city would build a waste-to-energy trash incineration plant. The money comes from Solid Waste Services’ budget.

It’s an early step in a project that city officials estimate would take seven to 10 years to come online.

The city’s landfill, located in Eagle River, has an estimated 42 years left on its life. An incineration plant would increase the landfill’s life to 177 years, said Mark Spafford, the city’s Solid Waste Services general manager.

Spafford said the other options are sending the trash out to the Valley or putting it on a barge. Neither are economically viable, he said.

“We need to do whatever we can as a department to help extend the life of the landfill because once that landfill is gone, we don’t have any good options left,” he said.

Spafford said the study doesn’t commit the city to building the plant, which he said would cost around $300 million to $400 million. The study would give city officials a better idea of costs, how much time the project would take and how beneficial it would be.

In addition to burning the city’s garbage, the plant would also produce 20 to 30 megawatts when burning at peak capacity. Currently, the city produces 7.2 megawatts from methane captured at the landfill.

The Assembly initially approved the contract for the feasibility study Nov. 19.

After, Assemblywoman Meg Zaletel requested the Assembly reconsider, prompting a special meeting Tuesday. Members voiced concern with giving a sole-source contract to the company doing the study, StreamlineAM, rather than going through the city’s standard bidding process.

The $100,000 plan is supposed to be completed in 90 days — a timeline Zaletel found dubious. Paying that much money for something done so quickly is questionable, she said.

Assembly members voiced interest in slowing down the process and holding public hearings. When asked what the rush was, Spafford told the Assembly that Mayor Ethan Berkowitz tasked him with getting this project in motion as quickly as possible. He said StreamlineAM was the best company to do the study.

Pam Miller, executive director of Alaska Community Action on Toxics, said she has received calls and emails from people concerned about emissions from the proposed plant and its impact on global warming. She said her organization is doing more research before taking a stance on the proposal.

There are 75 garbage-burning plants across 25 states, most in the Northeast. There are four on the West Coast, and the most recent plant was opened in Florida in 2015. They are far more common in Asia and Europe.

Such plants have been increasingly promoted as renewable energy sources and are labeled as such by the U.S. Department of Energy. However, environmental groups argue that burning trash does not fit a term more closely associated with wind, hydroelectric and solar energy production.

Modern incineration plants have filters to capture pollutants but still emit greenhouse gases. Additionally, the amount of organic materials like wood, paper and plant matter that ends up in trash bins has declined since the 1960s, while the amount of plastics thrown out has greatly increased.

Spafford said in addition to fixing the landfill problem, an incineration plant could burn sludge from Anchorage Water & Wastewater Utility. That would save the city from spending $100 million on a new incinerator for AWWU.

Spafford said he’s interested in importing waste from other jurisdictions like the Valley and Kenai Peninsula to ease the financial burden of building and maintaining the plant.

“It would be great if we could take care of all the solid waste needs for everybody that’s on the Railbelt,” he said. “That’s essentially what a plant like this can do.”

Trash incinerators have a bad reputation, Spafford said, but they now include far more air pollution controls. Public perception and high up-front costs have been barriers to more facilities being built, according to the EPA’s website.

Their emission levels are similar to natural gas plants. Spafford said he visited the country’s newest facility in Palm Beach County, Florida. He was struck by how non-smelly the plant was.

Spafford said the feasibility plan is aimed at providing answers to questions that the public and Anchorage Assembly have.

“If we get to the point of building something, we better damn well know how much we’re going to be emitting as far as CO2,” Spafford said. “We haven’t gone through those exercises yet.”

Finding a site around Anchorage could be an obstacle, Spafford said, as could getting a permit to pollute, buy-in from the next mayoral administration and public support.

“The rug can be pulled out from under your feet at any time,” he said. “There’s just any number of things that can happen that can derail, because it’s a huge project.”