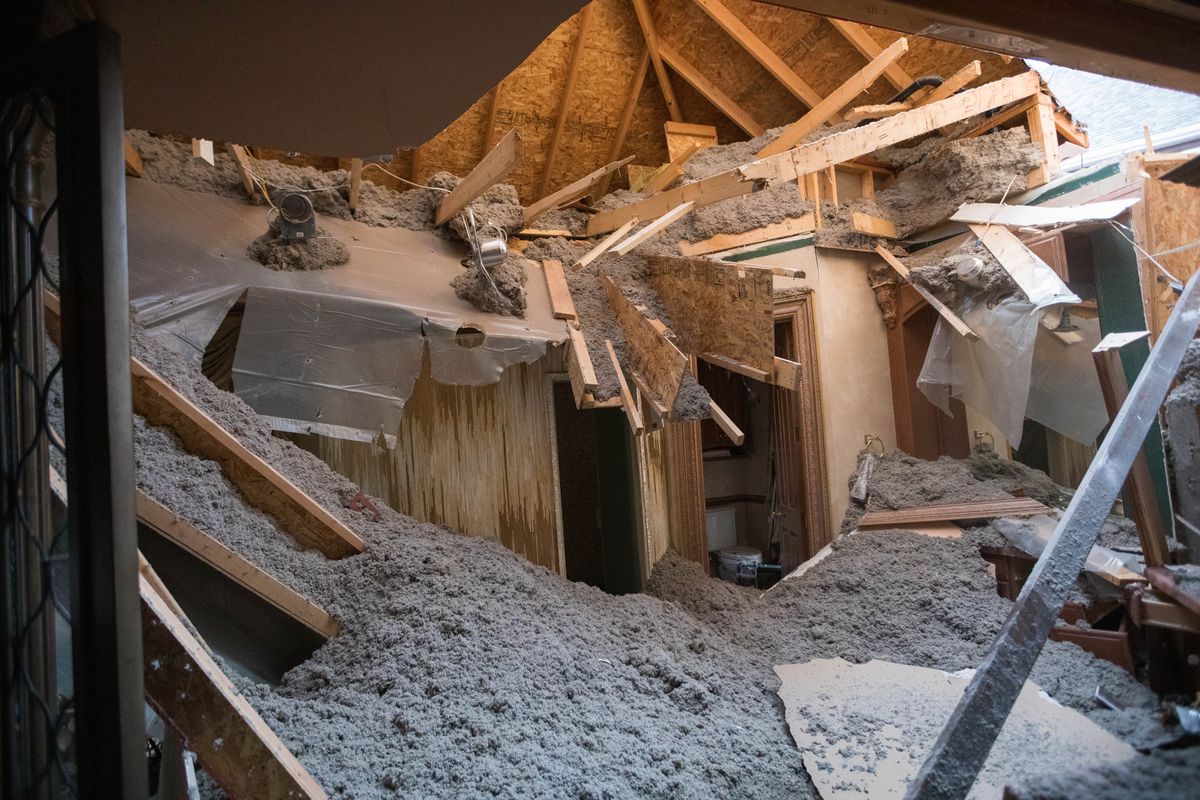 A home in Eagle River is badly damaged on Dec. 1, 2018. The house, which was partly built on fill, suffered severe problems during a strong earthquake that shook Southcentral Alaska on Nov. 30, 2018. (Loren Holmes / ADN)

A home in Eagle River is badly damaged on Dec. 1, 2018. The house, which was partly built on fill, suffered severe problems during a strong earthquake that shook Southcentral Alaska on Nov. 30, 2018. (Loren Holmes / ADN)

In the months following the earthquake, public and private building inspectors fanned out to assess damage in homes and businesses from Chugiak-Eagle River through the Anchorage Bowl and south to Girdwood. They categorized buildings with green, yellow or red placards — green meaning any damage was superficial; yellow meaning the building could still be occupied under certain conditions; and red meaning the building should only be occupied to repair it.

The resulting conclusion is that a higher level of building regulation in the Anchorage Building Safety Service Area — which essentially covers the Anchorage Bowl south of Eagle River and north of Girdwood — resulted in more buildings being built to code and that survived the earthquake at a higher rate.

Outside the safety service area, builders hire private inspectors and don’t need to have their building plans reviewed.

“The reason they had all the damage in Eagle River is nobody was looking,” said Don Hickel, lead structural inspector for the Municipality of Anchorage. “And that’s pretty self-evident.”

But proponents of the independent inspection process outside the safety service area say the private model is as effective as the city’s, and less expensive for home buyers.

That is a “shocking comparison,” said Wael Hassan, a University of Alaska Anchorage associate professor of structural earthquake engineering. The biggest takeaway from that is “you should follow building codes," said Hassan, who was appointed by the California-based Earthquake Engineering Research Institute to study the quake’s impacts on structures.

A year after the quake, city inspectors have gone through 3,800 buildings in the municipality.

[Part 2: How a few seconds of shifting deep below the Earth’s surface caused the biggest earthquake in Anchorage since 1964]

Builders and others question whether the heavier damage in the Eagle River and Chugiak was the result of how the building code is enforced. They argue that quake just hit the area harder.

“The ground movement was drastically different in different parts of Anchorage and Eagle River,” said Chuck Homan of home remodeler Homan Inc. "I just think it was the way the earthquake hit certain areas.”

However, an assessment of ground-shaking levels done by FEMA, the municipality and Golder Associates found some of the worst shaking was in Anchorage — and that ground shaking did not necessarily correlate with areas that sustained the most damage.

Likewise, a report published by the University of Alaska Fairbanks and written by several seismologists for the Alaska Earthquake Center found that although ground motion data for Eagle River was somewhat lacking, the higher damage rates weren’t due to worse shaking.

“The higher rates of building damage outside of the Anchorage Bowl do not appear to correlate with higher ground motions,” the authors wrote.

“That’s what we’ve found out there in Eagle River,” Hickel said. “They didn’t have the proper building materials. It was unbelievable.”

Asked about the higher rate of damage in Eagle River despite scientists saying the ground didn’t move more there than Anchorage, many proponents of the independent inspector system were dismissive. John Anderson, director of research and rural development for the Alaska Housing Finance Corp., and Troy Bloxom, a private inspector, said they think the municipality is using the situation to expand its safety service area.

Bloxom said he disagrees with the muni’s damage assessment.

“I honestly think the municipality would love to incorporate Eagle River into the service area, because they need the funds," he said. "There’s motivation there. Whether or not their numbers are accurate, that’s up for debate.”

Amy Mestas, a structural engineer at PDC Engineers in Anchorage, inspected homes in and out of the service area. In Anchorage, she said, about half the damage she saw was superficial. In Eagle River, she saw a high rate of structural damage and code violations.

“It was almost always an issue of either the ground underneath it having some sort of failure, or some sort of structural failure,” she said. “A lot of problems of inadequate nailing of the shear walls. It would just be real hard to get that house built in Anchorage because that gets inspected.”

Mestas said her firm believes the Eagle River area should be incorporated into the safety area.

Eagle River has never been part of the safety service area, largely for political and philosophical differences between residents and their counterparts 10 miles to the south. The Eagle River area tends to be more conservative than Anchorage, said Debbie Ossiander, and has long fought for independence from the city’s politicians.

A longtime resident of Birchwood, on the north end of Chugiak, Ossiander is also a former Anchorage Assembly member who currently chairs the Chugiak-Eagle River Advisory Board and the Birchwood Community Council and a former member of the Anchorage Metropolitan Area Transportation Solutions (AMATS) Citizens Advisory Committee.

Ossiander said her council is generally against inclusion in the service area, although she noted there is more support now for such a move than in the area’s more independent past.

Ossiander said Chugiak-Eagle River residents have long lobbied for more flexible land use and building rules. It’s an independent streak that dates back to the early 1970s, when Chugiak-Eagle River was voted into the newly formed borough (and later, municipality) against the wishes of local voters.

“This part was the most resistant,” she said.

Ossiander said the area’s more lax rules enable people to do things like build out of pocket and at their own pace, something she and her husband did over the course of 15 years. That would be nearly impossible inside the safety area, she said.

When the issue of joining the safety service area came before the Birchwood council earlier this year, Ossiander said “there just wasn’t any push for it.”

She believes the earthquake damage in Eagle River was caused by heavier shaking in the area.

“I think it’s just that the earthquake hit harder out here,” she said.

But for Dr. Steve Baker, the evidence is clear.

Several homes in the Bakers’ Eagle River Valley neighborhood were heavily damaged and one has been demolished. Baker believes the homes, all built in the late 1990s, were slapped up on the cheap. As evidence, he points to the homes’ lack of seismic tie-downs and the fact that “Eagle River doesn’t have a requirement for inspections like Anchorage does.”

Increased regulation on the horizon

The earthquake has not caused a swell of interest in Eagle River to join the safety service area, but it has spurred some change. Anderson, of Alaska Housing Finance Corp., said the company has its own protocol for anyone who has a mortgage through them. That includes building codes that are on par with the municipality’s.

Anderson said the earthquake was a wake-up call, and Alaska Housing is now planning to recertify its 30 inspectors and implement a building plan inspection process, which could increase costs. So far, builders are on board, he said.

“The builders want to do the right thing," Anderson said. "They are still going through a process of trying to build affordability into the home.”

The increased costs of going through the municipality’s inspection process can be several thousand dollars more.

Homan, the Eagle River builder, has done remodels and some home-building in the area since 1978. He said the private inspection process saves money and is as effective as government inspectors.

He occasionally does work on homes where he sees too few nails, or other code violations, but those are the exception to the thousands of well-built homes OK’d by private inspectors, he said. Those issues are being addressed by Alaska Housing, he said.

“The building code is about life safety, and from a life-safety standpoint, the builders are doing their job,” Homan said.

But Doehl and Ross Noffsinger, the city’s engineering services manager, said they routinely saw signs of builders cutting corners to maximize profit on a home rather than follow code.

“Over and over again, the inspectors and plan viewers are seeing they didn’t use enough nails, the nail spacing is too far apart and the nail sizes are small,” Noffsinger said.

“The builder hires the inspector, you know. How’s that gonna work?”

Noffsinger said home buyers generally aren’t aware of the difference in the inspection process in Anchorage versus Eagle River. It’s the biggest purchase they’ve ever made, and they assume the proper processes took place, he said.

The only way to ensure the buildings are up to code is to have an independent, third-party inspector — like what the city provides, he said.

It’s not that parts of Anchorage weren’t hit hard by the quake. Some parts of the city were highly impacted. The Sand Lake and Jewel Lake area saw houses sink several inches into the ground, causing serious foundation damage.

Keith Mobley, senior geotechnical engineer at Northern Geotechnical Engineering Inc., did soil surveys of the area. He said some of the fill used to fill in swamps the homes were built on was improperly compacted.

“The vast majority of it was due to improper (compaction),” Mobley said. “The homes performed well. If the foundation stayed put, then the homes had very little problem.”

Noffsinger said there has been code regulating fill compaction for decades, but it’s questionable how well that code was enforced over the years.

“They thought it was compacted, but then you take something like an earthquake and shake it — they all move,“ Noffsinger said.

For Bloxom, the damage around Sand Lake shows it’s not the public/private inspection processes that created the damage disparity. It’s the ground under the houses.

"When the ground turns to Jell-O, and we have liquefaction, nothing matters,” he said.

Noffsinger said the municipality found 489 soil failures in the entire municipality, 425 coming in the safety service area. There are likely more, he said, where homeowners didn’t ask for a municipal inspection. Many of those were clustered together in areas such as Sand and Jewel lakes, west of Minnesota Drive and south of International Airport Road, and in a pocket between Minnesota Drive, Arctic Boulevard, Raspberry Road and Dimond Boulevard.

Bloxom said the city’s inspectors run a tight ship, but the private industry also works diligently. The partnership with the Alaska Housing Finance Corp. helps bring strong standards to areas throughout the state, outside of city government’s grips, he said.

However, Mestas, the private engineer, said the earthquake showed that a cheaper approach up front can be more expensive in the long run.

“We’ve heard plenty of times over the years that you can build the same home for $10,000 less in Eagle River because you don’t have to go through that process," she said. "While that might be true, some people are paying for it now.”

Next: A year after the quake, many Alaskan lives remain shaken

CORRECTION: A previous version of this story incorrectly reported Ossiander’s role on the AMATS Citizens Advisory Committee and incorrectly said the Birchwood Council voted against against inclusion in the BSA; Ossiander is a former member of the committee, not the AMATS board chair, and the community council has not voted on the issue.