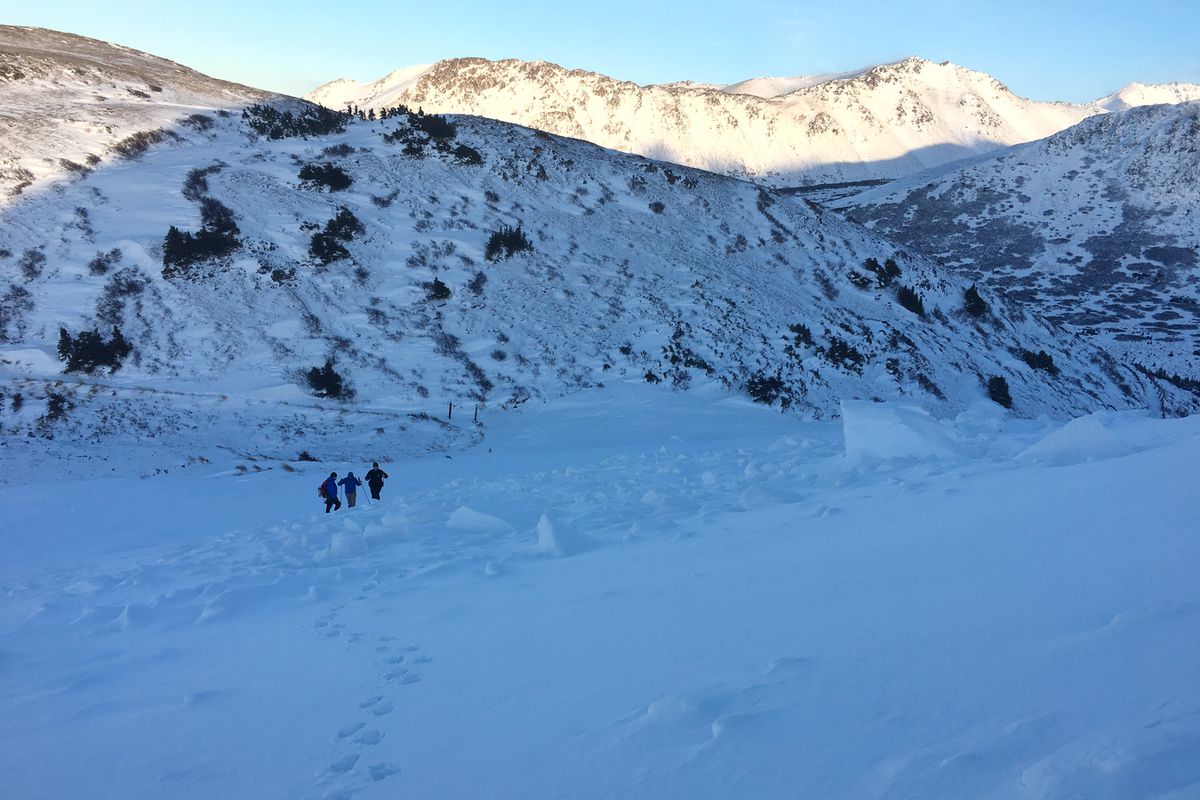 Avalanche debris near Flattop on Sunday, Dec. 8, 2019, that buried a hiker on Saturday who was rescued by another hiker passing by. (Photo by Wendy Wagner)

Avalanche debris near Flattop on Sunday, Dec. 8, 2019, that buried a hiker on Saturday who was rescued by another hiker passing by. (Photo by Wendy Wagner)

A hiker was dug out from an avalanche on Flattop Mountain after another hiker spotted moving feet in a pile of debris Saturday afternoon.

Alex Kuprienko of Anchorage said he was going for a normal hike on Flattop on Saturday when he noticed the feet kicking from a pile of avalanche debris about 100 feet up from the trail around 2:30 p.m.

He ran up and began to dig with his hands into the snow and freed the man in about five minutes, he said.

It would have been impossible for the man to free himself from the debris because he was pinned upside down with his arms spread open in snow that “was pretty much concrete,” Kuprienko said.

Once out of the snow, the man was soaking wet, shaking and stiff, Kuprienko said. He called 911 and placed his hat, gloves and scarf on the hiker to try to warm him, draping an extra jacket he’d packed in his bag over the man’s shoulders.

The hiker was so cold and stiff, “at first we couldn’t bend his arms to get the jacket on," Kuprienko said.

Kuprienko assumed the man had been recently trapped and was shocked to learn he had been stuck head-first in the snow for over an hour.

“Usually after 12 to 15 minutes under the snow, you’re looking for a body,” he said. “When I found out he’d been in there for over an hour, I couldn’t believe it honestly. I thought maybe he was delirious for a while.”

Wendy Wagner, director of the Chugach National Forest Avalanche Information Center, said the avalanche fell in large blocks, which allowed for air pockets and spaces to form within the debris. She said the hiker was likely able to breathe because he was near a pocket of air. The hiker had been completely buried at first, but was able kick his legs free, which allowed Kuprienko to spot him.

“Obviously this is a miracle that he was able to breathe for that long,” Kuprienko said.

Slowly, and with the man leaning heavily on Kuprienko, the two started toward the Glen Alps parking lot. Paramedics from the fire department were waiting for them by the time they arrived.

“It’s unbelievably lucky,” Wagner said. “It’s really rare that someone has a positive outcome after being trapped under the snow for over an hour.”

The man was checked out by medics inside the ranger station and started to warm up but ultimately refused an ambulance, Kuprienko said. He drove the man home.

The avalanche fell from just above the Blueberry loop and Flattop trail intersection, according to a report from the avalanche information center. Wagner said the avalanche danger was fueled by heavy winds Saturday. A 2- to 3-foot-thick wind slab with a cornice became very unstable and fell in the short but steep terrain.

Heavy winds are expected again throughout the Anchorage area Monday. Wagner warned that anyone planning to hike should take an avalanche safety course and follow general safety precautions, like hiking with a partner or alerting someone about where you’re going and when you plan to return home.

“Anytime we have snow or high winds in the forecast, it’s a textbook recipe for creating avalanche conditions," she said.

Kuprienko said he underwent an avalanche training course about seven years ago that taught him how to respond to and look for avalanches. He recommends that hikers prepare for the weather and stay alert, even when hiking “in your backyard” on trails like Flattop.

The avalanche won’t keep Kuprienko away from Flattop -- he went back Sunday with Wagner and Ben Corwin, chief ranger of Chugach State Park, to investigate the site.

“I didn’t finish my hike yesterday,” he said.