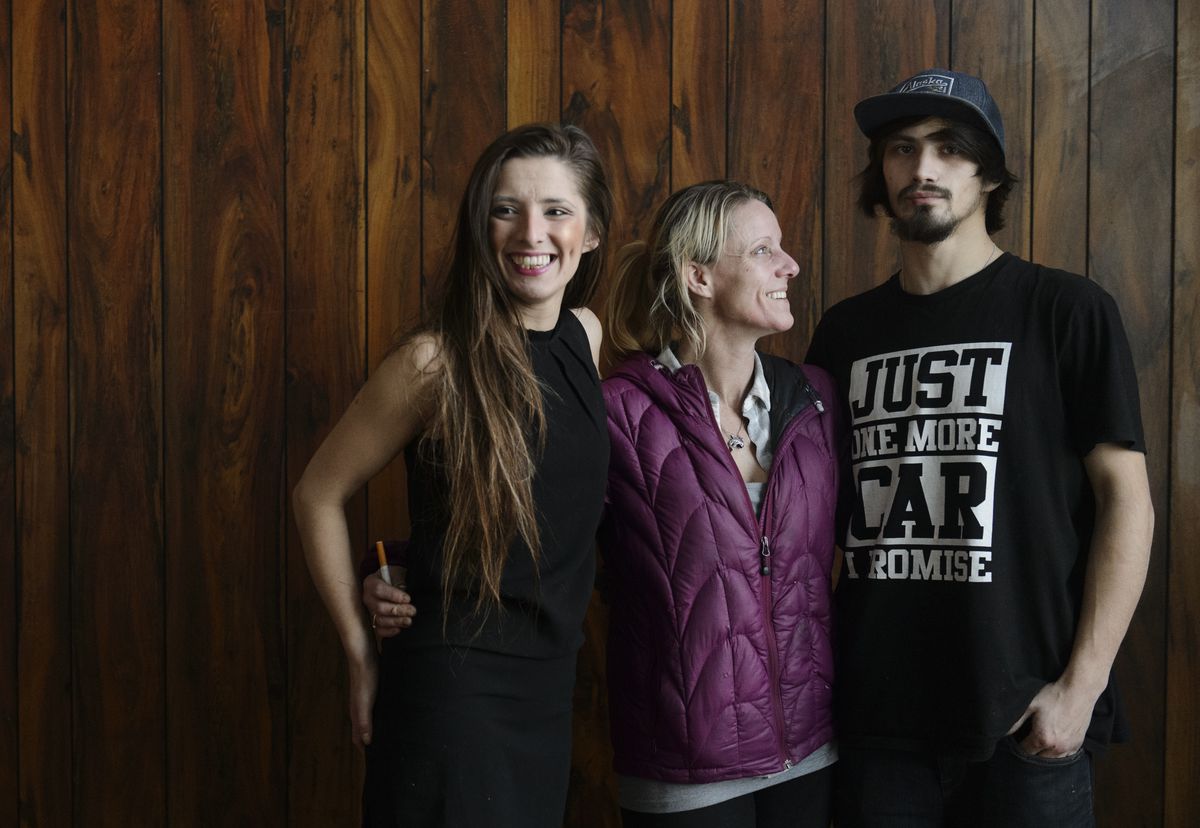 From left, Rachelle Abbott, Sheila Abbott and Tyler Abbott have all had vehicles impounded by the city, and all three are on Anchorage's scofflaw list. The Abbotts say they're victims of an unfair program. Photographed Dec. 4 in Anchorage. (Marc Lester / ADN)

From left, Rachelle Abbott, Sheila Abbott and Tyler Abbott have all had vehicles impounded by the city, and all three are on Anchorage's scofflaw list. The Abbotts say they're victims of an unfair program. Photographed Dec. 4 in Anchorage. (Marc Lester / ADN)

Sheila Abbott and her son Tyler have seen car after car seized over the past few years — about 30, they estimate.

When one vehicle gets seized, they shell out a couple hundred dollars for another. It will end up in the impound lot soon enough.

The vehicles have been taken for various reasons, but they say the pattern started when they landed on Anchorage’s scofflaw list.

Tyler, 23, Sheila and her daughter, Rachelle, 25, owe the city more than $12,000 in delinquent traffic fines — more than they believe they’ll ever be able to pay off. All three are on the city’s scofflaw list, the undesirable home for about 3,500 names.

Just one of the Abbott family’s 30 cars was directly taken through the Municipality of Anchorage’s scofflaw program. City records show the family has had 10 vehicles seized, but since they don’t register cars in their name, there’s often not a paper trail. (Cars can be impounded for other reasons, such as a revoked license or lack of insurance.)

The family says the target the scofflaw program puts on their backs leads them to use disposable vehicles, rather than investing in something permanent. As scofflaws, any cars they drive can be impounded, so they treat them like burner cellphones.

Neither Sheila nor Tyler have a license or insurance. For money, they work on houses, peruse the Craigslist free section for stuff to fix up and sell, or find other odd jobs. Rachelle is a waitress at a restaurant downtown.

Tyler has received 19 traffic citations since 2015, court records show. Fifteen have resulted in delinquent fines in Anchorage, landing him on the scofflaw list. He has convictions for misdemeanor theft and misdemeanor assault, and an open case of felony vehicle theft.

Sheila has 32 traffic citations on her record and convictions for felony theft and drug possession. Rachelle has nine traffic violations and a felony burglary conviction. Court records show the Abbotts generally did not show up to court dates to protest the charges, therefore they were convicted by default.

The city implemented the scofflaw program in 2007 as a way to keep roads safe. Under the program, police can seize vehicles from anyone with at least $1,000 in delinquent traffic fines. The idea was to increase public safety by curtailing repeat traffic offenders.

Over the past year, Anchorage officials have increasingly caught flak for the program, prompting the city to convene a working group to study the policy. The group recommended some tweaks, but overall gave the program a renewed endorsement.

Critics say it’s draconian, targeting the poor. Speeders who pay their tickets aren’t caught in the scofflaw snare. And because any car driven by a scofflaw is subject to impound, it can impact drivers with an impeccable record who unknowingly lend their car to someone on the list.

Does it target the poor?

To get their car back, scofflaws must pay their entire debt. Meanwhile, a daily fee accrues while the car is impounded.

One Anchorage Assembly member is worried that the scofflaw program penalizes people of lesser means.

“There is concern that this ordinance will disproportionately affect people in lower-income neighborhoods like Mountain View, Fairview, etc. where they no longer have a vehicle and are unable to get to work, thus perpetuating a cycle (of) inability to make money to live let alone pay these fines,” Assemblywoman Meg Zaletel wrote in a May 7 email to Lance Wilber, director of the city’s office of budget and management.

City data shows people living in Mountain View — one of Anchorage’s lowest-income areas — are slightly more likely to be on the scofflaw list.

Sheila and Tyler say the program has mired them in debt.

On Sept. 11, 2015, Sheila was cited for driving without insurance. She didn’t appear in court and still owes $560 in fees. Rather than get the vehicle out of impound, she and Tyler started buying cheap cars and not registering them in their names. They continue to drive unlicensed. Rachelle has citations for driving without a license, but says she’s stopped.

Their vehicles keep getting seized, whether it’s for lack of insurance, registration, being unlicensed, being in a state of disrepair or for other reasons.

That could be for a variety of reasons, city attorney Becky Windt Pearson said, adding that the analysis is “imperfect.” While attempting to contact scofflaws, the Anchorage Daily News found many of the top offenders have violent criminal records, meaning they may be incarcerated.

Or, Windt Pearson said, “maybe it’s because they don’t have access to a vehicle anymore because they got so many tickets.” The city’s analysis also focused on the most extreme part of the list while ignoring the vast majority of scofflaws.

City officials said those struggling to pay high fines can set up a payment plan with the court to avoid getting on the scofflaw list. Only once the fines are considered delinquent due to lack of payment do they become scofflaws.

The city’s working group included employees from the legal, police, IT and treasury departments. The group suggested the city better advertise how to get on a payment plan through the court system and make it cheaper for scofflaws to get their cars back. Soon, they’ll ask the Assembly to review the suggested changes.

One of the things the group tried to determine was whether a driver could make the list with a single ticket.

He pleaded not guilty in July but missed the notice for his Sept. 26 court date because he left the state to be with his father, who has stage 4 brain cancer, he said via Facebook Messenger. He didn’t know he was a scofflaw until being contacted by a reporter.

“Guess they are going to try and impound my car now if I drive back?” he said.

Adams is an unintended consequence of the scofflaw program. Windt Pearson said the whole idea was to increase punishment for repeat offenders.

Windt Pearson pointed out that tweaking the program wouldn’t be simple, either. State statute guides city scofflaw programs. The state allows cities to make the program more harsh, but not weaker. For example, Anchorage could make it so anyone with $500 in delinquent traffic fines qualifies for the scofflaw list, but couldn’t change the program so drivers must get at least three tickets to qualify.

Single-ticket scofflaws like Adams are outliers, as are people like Donald Dorgan, who has 45 tickets. The average scofflaw has seven unpaid fines amounting to $1,555. Bradley Eldridge’s 77 citations top the list.

The Abbotts said they understand the city wanting to collect money and admit fault for their actions. Sheila said being on the list does make her and Tyler drive more cautiously for fear of being pulled over.

But they also feel the program traps those of lesser means under a mountain of debt.

The city ombudsman’s office has also questioned the scofflaw program’s fairness. An April memo concluded the city was liberally interpreting moving violations to include paperwork and equipment violations, like a broken taillight or expired registration.

By comparison, the state, which uses a point system to penalize dangerous drivers, doesn’t assess points against drivers for such violations. But paperwork and equipment violations account for 40% of all Anchorage scofflaw citations, according to the city’s treasury department.

Darrel Hess and May Ramirez-Xiong of the ombudsman’s office wrote, “for the (city) to state that the scofflaw ordinance is strictly about public safety, and then seize private property for delinquent fines, including fines related to offenses for which the state DMV does not assign points, appears to run counter to the public safety argument the (city) has advanced for the past 12 years.”

The memo suggested the program serves as an instrument for debt-collection rather than a public safety boon.

“There are millions of dollars owed to the (city of Anchorage) for unpaid criminal fines, but the (city) does not seize the personal property of those individuals," Hess said. "But the (city) will seize someone’s vehicle who has not paid some fix-it tickets.”

That notion is one of the most frequent complaints city officials hear about the program.

“I’m aware of the critique about it being mostly a payment recovery mechanism,” Windt Pearson said.

Perhaps the best argument for the scofflaw program being about safety rather than money is that the city has not researched whether the program pays for itself, or if the city actually loses money running it.

Do scofflaws get fair warning?

The city does not notify people when they are placed on the list. It includes an informational insert about the program when they send notices of delinquent fines. Several scofflaws contacted by a reporter had no idea they were on the list.

Deputy municipal attorney Pam Weiss argued logistically, there is little more the city can do to inform scofflaws. Their notice of a delinquent fine comes with a bright-colored flier informing them of the program.

Weiss said people do complain to the city attorney’s office that their vehicle was impounded after they unknowingly lent it to a scofflaw, or that the impounded vehicle was owned by the scofflaw’s employer.

The city ombudsman’s office oversaw a 2015 investigation into the impounding of a work vehicle after a manager of a local pest control company complained a company truck was taken by police because a driver was on the scofflaw list.

The company’s owner had checked the employee’s driving record. He had a valid license. But he hadn’t checked the city’s scofflaw list, which is on the website for the city’s treasury department.

The law is not “relatively obscure” for the Abbotts. They’ve gotten used to turning the corner to see their car lifted onto a tow truck. Being scofflaws is part of their lives now, so ingrained that they’ve learned to laugh at the misfortune.

On Dec. 4, Tyler happened to be wearing a black T-shirt that read, in white letters, “JUST ONE MORE CAR I PROMISE.”

It was a gift from a friend, ribbing him for all the vehicles he’s had seized by police.