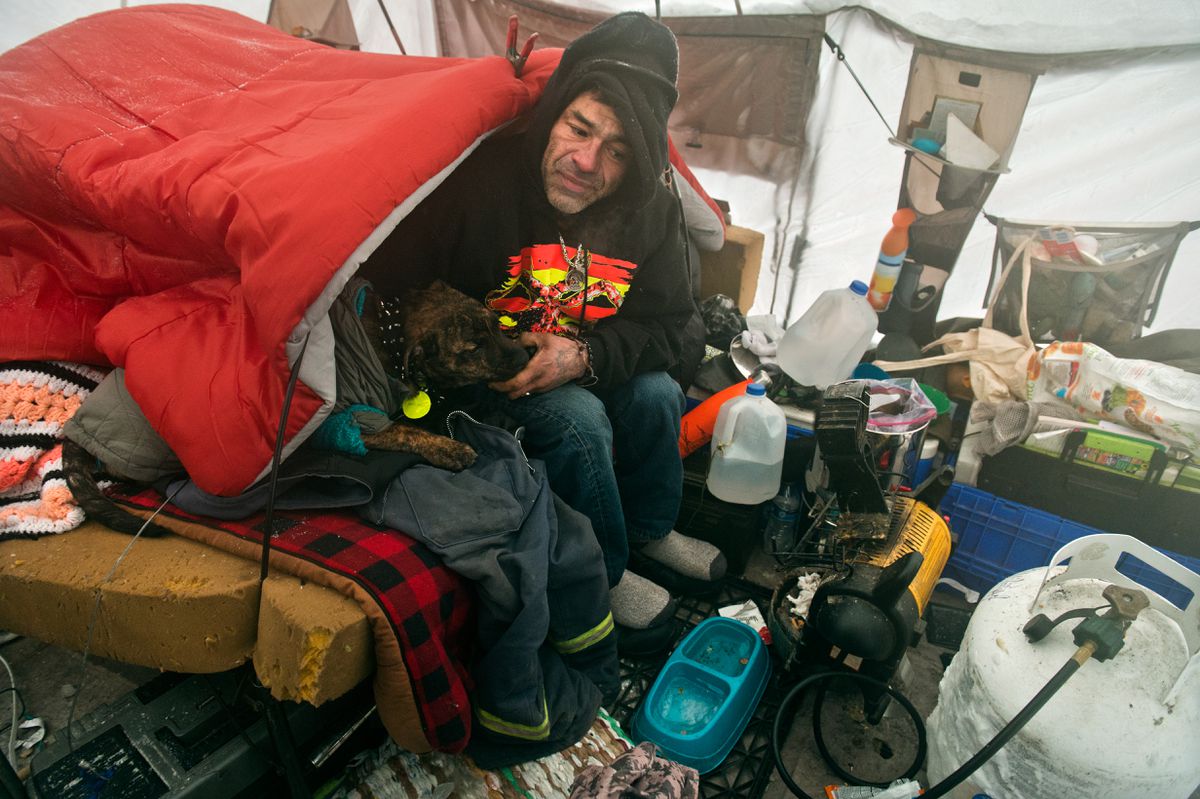 Ricardo Molina and his dog, Satan, sit next to a space heater inside a tent near 3rd Avenue and Ingra Street on January 6, 2020. Molina said there are about a dozen other homeless people in the area who sleep outside, even in the cold weather. (Marc Lester / ADN)

Ricardo Molina and his dog, Satan, sit next to a space heater inside a tent near 3rd Avenue and Ingra Street on January 6, 2020. Molina said there are about a dozen other homeless people in the area who sleep outside, even in the cold weather. (Marc Lester / ADN)

The city of Anchorage is paying almost $1 million to provide beds at Brother Francis Shelter and Bean’s Cafe this year, though those shelters only have about 400 beds combined and the homeless population last year was counted at 1,111 people. Ten churches around Anchorage also provide shelter for families, and the Downtown Soup Kitchen Hope Center has some beds for women.

But the prolonged cold snap Anchorage is currently experiencing tests the homeless services network in ways no other season does, as low temperatures can be fatal. Negative temperatures have been constant since Saturday. The worst is yet to come, as Tuesday is forecast to hit 19 degrees below zero. Thursday is projected to be the first reprieve from subzero temperatures in five days, with a high of 3 degrees.

Exposure to the elements creates an extra layer of desperation for the homeless, said David Rittenberg, shelter program director for the Brother Francis Shelter, which provides 240 beds. Rittenberg says he sees more people yelling, pounding on doors and windows or otherwise trying to draw attention in order to get a bed.

“We will see an increase in those types of behavior, because people are cold and upset. That’s how they’ve learned to advocate for themselves," he said. “People are more desperate to come inside, and that desperation can take different forms.”

Over the past few days, Brother Francis has been at or near capacity. The shelter primarily operates between 4:30 p.m. and 8 a.m. Those who volunteer for the shelter or provide proof of employment somewhere else can access the building during the day, but the bulk are sent out of the building.

Many go to Bean’s Cafe, which has limited day shelter services.

Bean’s serves 800 to 1,000 meals per day, said deputy director Kim Kovol. They also provide day shelter, though they often get about twice the 230-person capacity, so they rotate people in and out.

Throughout most of the year, the parking lot between Bean’s and Brother Francis is chaotic, with dozens if not more than 100 people walking around. On Monday, only a handful were milling about. William Duny, 68, and Steven Chya, 59, were among them.

“This weather ain’t doing any good,” Chya said, showing off the Bunny Boots donated to him last winter. Duny was in running shoes.

The men were trying to stay warm as they waited for their next chance to shelter inside Bean’s. In January 2018, the city counted 97 unsheltered homeless. The next count occurs Jan. 28.

Ricardo Molina, 44, is one of the few who is choosing to sleep outside. There are about a dozen who prefer camping despite the cold, he guessed. After 10 years of incarceration, he doesn’t like walls, he said.

Molina was camped on a hill off of Third Avenue and Ingra Street with his 4-month-old puppy, Satan. On Monday, the two were parked in front of a small propane heater, cuddled under blankets. They were doing alright, Molina said. The heater kept a bowl of water for Satan from freezing, though another bowl an inch further from the heater was frozen solid.

“This winter is pretty cold," he said. “But I’ve been at this temperature before.”

In summer, a lot of people prefer to camp to avoid crowding and bed bugs, said Nancy Burke, Housing and Homeless Services coordinator for the city of Anchorage. That becomes deadly in the winter. Burke said there have been deaths this winter, though she didn’t know how many.

Anchorage police spokesman MJ Thim said there were outdoor deaths in 2019, but he didn’t immediately know how many or the cause.

To prevent deaths, police pay extra attention to the homeless who are outside once it gets to zero or below. Officers will stop if they see people outside and assess their condition. They will inform them of shelters and give them a ride if the person isn’t properly dressed for the conditions, said APD spokeswoman Renee Oistad. Oistad said there was no quick way to determine how many cold weather calls there have been this winter.

Braving freezing temperatures is an uncomfortable feeling everyone in Anchorage is familiar with, Rittenberg said. The Brother Francis program director said it puts homelessness at the forefront of people’s minds, but the problem doesn’t go away in the summer, when his shelter can still hit capacity.

Winter is a harsher test for the homeless community, though. Darleen Mishakoff was biding time in Midtown on Monday. She moved to Anchorage from Tyonek in October, and has since become homeless.

Mishakoff said her legs, feet and toes ached from walking in the cold, covered by cracked boots from Walmart. She said she’s been stolen from and men have tried to pick her up as if she were a prostitute.

She stays away from the shelters because of the drug and alcohol use there. Instead, she sleeps in an unheated tent in the woods. The nights are so cold it’s hard to sleep, she said. The mornings aren’t much better.