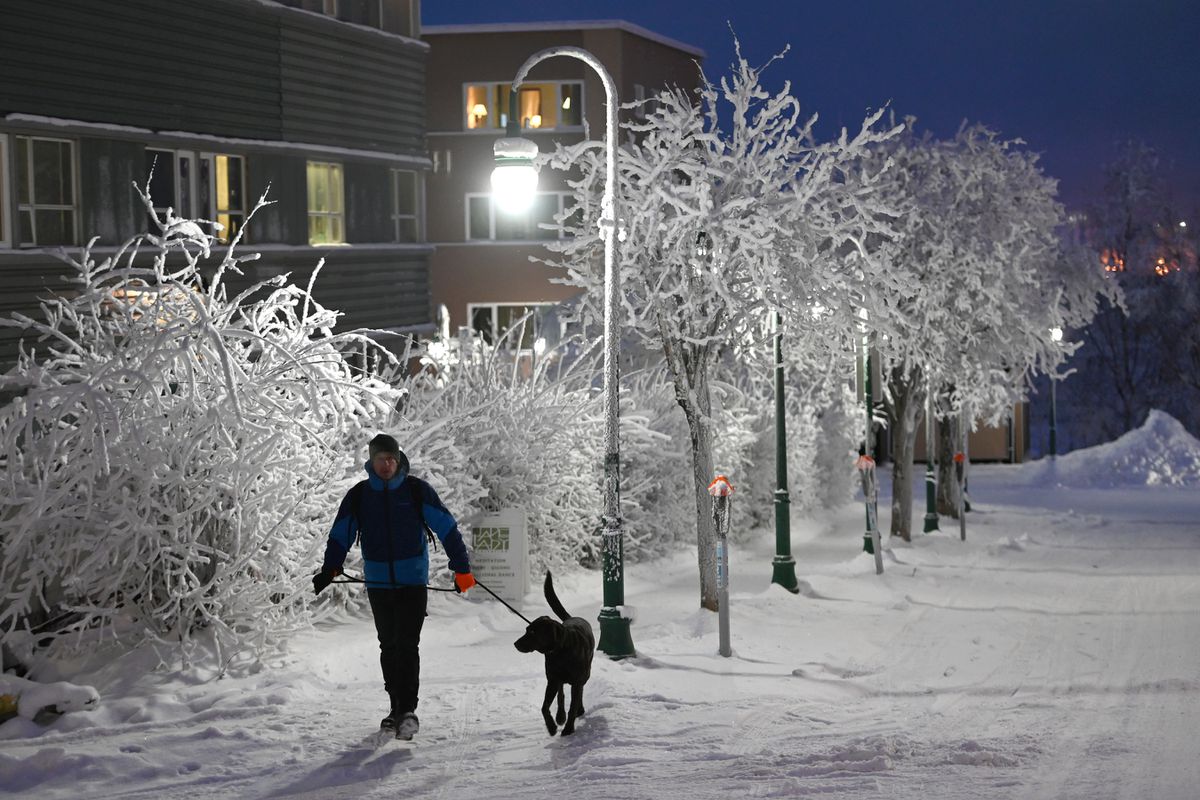 The white light from an LED street lamp brightens E Street as Andrew Hartsig walks with 5-year-old chocolate Labrador retriever Agnes on Monday. The conversion from orange-glowing high-pressure sodium bulbs throughout Anchorage was completed in 2017, but a recent audit found the utilities were charging the city a fee calculated for the less energy-efficient sodium bulbs. (Bill Roth / ADN)

The white light from an LED street lamp brightens E Street as Andrew Hartsig walks with 5-year-old chocolate Labrador retriever Agnes on Monday. The conversion from orange-glowing high-pressure sodium bulbs throughout Anchorage was completed in 2017, but a recent audit found the utilities were charging the city a fee calculated for the less energy-efficient sodium bulbs. (Bill Roth / ADN)

An internal audit by the Municipality of Anchorage has found that for years, the city has unknowingly been paying for streetlights outside of its service areas, or to illuminate state roads.

The audit also determined that after a public campaign to switch streetlights over to LED bulbs, the city is still paying utilities a higher electricity fee based on old, less-efficient bulbs.

The audit did not calculate the total overpayment for streetlights, but it shows the city overpaid by hundreds of thousands of dollars per year. Municipal Manager Bill Falsey said the city is working to calculate that figure.

The 2019 audit scrutinized city billings from January 2017 to June 2019, but auditor Michael Chadwick said some of the issues go back “years and years and years.”

There are 26,000 streetlights in the municipality, owned and maintained by various entities.

In 2017, Anchorage completed its conversion of Municipal Light & Power streetlights to LED bulbs throughout the municipality. The campaign started under former Mayor Mark Begich and continued under Mayor Ethan Berkowitz, who said he would spend $4 million to $6 million to finish the conversion.

In 2016, Berkowitz ceremonially installed an LED bulb to kick off a bond-funded $200,000 project to install high-efficiency bulbs in ML&P areas like Government Hill, Fairview and Mountain View.

The campaign was centered around LED bulbs being more environmentally friendly, rather than more economical.

Still, the city promised savings, which were supposed to come from the utility adjusting its flat-rate fee for streetlamps. (The fee was calculated with the older sodium bulbs in mind.) That never happened.

“As a result, the savings from the LED Conversion Project were never passed on to the customer, the Municipality,” the audit states. “ML&P estimated a $400,000 savings per year in combined power, operating and management costs.”

To change the flat fee requires a drawn-out process during which the utilities propose a new fee to the Regulatory Commission of Alaska. Several entities, such as the Alaska Attorney General’s Office and big ratepayers, often have attorneys intervene to have a say in the eventual new rate.

Because the process is expensive and time-consuming, it doesn’t happen annually, Falsey said, so city leaders never anticipated rates for the new LEDs would kick in immediately.

The audit also found ML&P and Chugach Electric Association billed the city for lights that didn’t exist. A project on Abbott Road led to the removal of nine lights in September 2018. But the audit found the city was billed for those lights until June 2019.

Overpayment to ML&P is different from overpayment to Chugach since the former is a city-owned asset, but the result is the same — tax dollars went to ML&P when they weren’t supposed to, and now the city has to try to get that money back.

“The punchline might well be the same,” Falsey said.

The audit was requested by the municipality after city leaders discovered it was paying for lights on Jewel Lake Road, which the state should have been paying for.

Falsey said it’s an example of why internal audits are helpful. It turned out the problem was larger than just the Jewel Lake area. ML&P billed the city for 221 lights that are not covered by a responsibility agreement between the state and city. Those lights are estimated to cost the city $170,000 per year. Chugach billed the city for 21 lights on state roads.

Falsey said that could be due to looser agreements that were put in place years ago, during prosperous oil boom times.

“I gather that in the times of plenty, when the state was giving us $50 million per year to build roads, there were times where we probably said, ‘We’ll pay for that street light,’ ” he said.

Now that the problems are identified, the city has to figure out how to solve them.

Sending the bill to the state might not be an option, as Falsey said there is concern the state would let the lights go dark rather than pick up the costs, which would negatively impact city residents.

“I know there are parts of town that will not appreciate being plunged into darkness and then having two governments point fingers at each other," Falsey said.