A Midtown hotel melee, a permanent scar and an endless quest for criminal charges 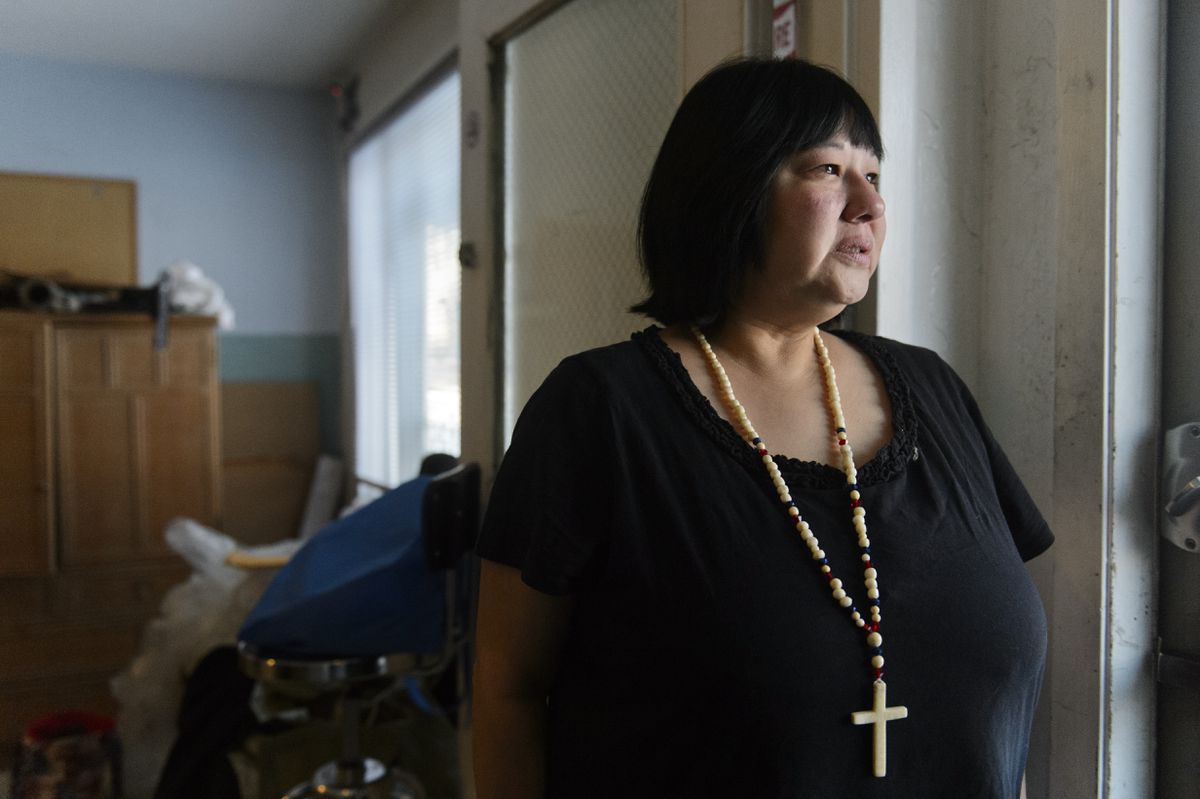 Flossie Spencer said she was assaulted by a guest while working at Arctic Bed and Breakfast on New Year’s Eve in 2018. She was left with nerve damage and scarring when she was struck with a frying pan. No charges were filed against the alleged assailant. (Marc Lester / ADN)

Flossie Spencer said she was assaulted by a guest while working at Arctic Bed and Breakfast on New Year’s Eve in 2018. She was left with nerve damage and scarring when she was struck with a frying pan. No charges were filed against the alleged assailant. (Marc Lester / ADN)

This is a Midtown Anchorage tale, about a man who threw a frying pan that hit a woman in the face.

It is the story of an encounter in a low-rent hotel that prosecutors decided was too messy to take up, and of the aftermath of that decision:

A woman left with constant pain, a permanent scar and a sense of being failed by everyone she thought would help her.

A man who didn’t go to prison but ended up evicted, unemployed, living in his car and nursing his own anger.

In this story, nobody wins.

‘I had to get out of there’

Flossie Spencer, 51, an Inupiaq artist known for her meticulous sewing of sealskin purses and neckties and a veteran of the Alaska Army National Guard, was at work on the last day of 2018.

She managed the office of Arctic Bed and Breakfast, a two-story hotel that sits just before Arctic Boulevard dips into the Valley of the Moon neighborhood.

The job supplemented her work promoting Alaska Native artists. The hotel’s clients could be salty but enjoyable, she said in an interview.

On that day, Spencer believed a tenant had allowed a nonresident inside the hotel.

The man — known only as “Florida” — had been hanging out in the communal bathroom for long stretches of time, bothering other residents.

Spencer went to confront him and kick him out.

She said she armed herself with a handgun because she was afraid of the guy, and with trepidation asked him to leave, showing him the gun.

Florida spit at her but left, she said.

For the moment, she thought the conflict had ended.

An hour later, Spencer found herself at the door of a 57-year-old named David Mosley -- the tenant she believed had invited Florida inside the hotel.

Mosley worked as a mechanic for a snowplowing business. He and his girlfriend had recently moved into a room on the ground floor of the inn.

Spencer said she was unarmed when she approached Mosley’s door. She said she knocked on the door, telling him she was starting eviction proceedings against him.

He opened it and threw a cup of urine at her, she said. Her pregnant daughter was standing next to her.

“I had to get out of there. ... I didn’t want him hitting my baby with a shovel,” said Flossie’s daughter Celena Spencer.

A neighbor, Andrew Damato, joined the fracas in the hallway, wielding a canister of pepper spray. Spencer said Damato then pepper-sprayed Mosley to defend her.

Spencer said she took steps back away from the door, until she was about 12 feet away.

Mosley threw a frying pan at her with such force that it tore Spencer’s right cheek, tearing a gruesome wound that a doctor later noted went down to the bone.

Afterward, "all I could see was blood,” she said.

She told her daughter to call the police.

Mosley’s version of the story is different.

He said he was minding his own business in his room when three people -- Spencer, her daughter and Damato -- showed up at his door, armed variously with a Taser, a small handgun and pepper spray.

(Spencer and her daughter deny this. Damato could not be reached.)

Mosley said he grabbed a shovel to defend himself but didn’t hit anyone with it.

He contends that as he tried to work his way to the bathroom, he flung a frying pan “like a Frisbee” to defend himself from the pepper spray.

“I was trying to hit that guy,” Mosley said. “The way I look at it, it went past him and got her. I didn’t even know.”

He denies flinging a cup of urine at Spencer, or brandishing a knife.

Mosley also said he wasn’t the person who let Florida into the Arctic Bed and Breakfast.

Police showed up to interview witnesses. They ended up arresting both Mosley and Damato.

Mosley said he wasn’t sure why he was being arrested, because in the chaos he didn’t know Spencer had been hit by the frying pan.

Spencer drove to the emergency room, where the on-call doctor asked a surgeon to look at her wound because it was so severe. She had layers of painful stitches put in and went to bed planning to attend Mosley’s court appearance the next day.

But that didn’t happen.

But when she talked to the Anchorage district attorney, he said the state wasn’t filing charges.

Even Mosley admits to being a tiny bit surprised when he was released without charges. He attributes it to Spencer, whom he said is “rotten."

“If she was such a good person, they would have prosecuted me,” he said.

John Novak, the Anchorage district attorney, said he’d arrived that morning to a large stack of files on his desk to screen. It had apparently been a raucous New Year’s Eve in Anchorage.

He read through the Arctic Bed and Breakfast case. Witnesses gave conflicting accounts of what happened, he said. He felt that the available evidence suggested Mosley could have been acting in self-defense. Some versions involved a shovel, some didn’t.

He decided no charges would be filed. Damato wasn’t charged for the pepper spray, either.

Though invisible to the public, it’s common practice for prosecutors to evaluate cases and decline to file charges, Novak said.

If there’s doubt that a jury could be convinced beyond a reasonable doubt “that someone did a crime, we have no business filing charges,” he said.

He stands by that decision today, a year later. Novak said he’d spent hours explaining the rationale for the decision in Spencer’s case, and asked a second attorney with his office to review it. The attorney reached the same conclusion.

“I am very confident and comfortable with my determination and I’ll take credit for it,” said Novak. “It was my decision. Charges were not warranted.”

Letters, emails and nothing

Novak’s explanation didn’t add up for Spencer. She couldn’t believe Mosley would face no consequences.

Her anger intensified as it became clear her injury was more than a cut on her face: She endured three surgical procedures on the wound. Sewing, her livelihood and her joy, became impossible for a time because of constant nerve and eye pain that felt like electric shocks on her face.

“What could I have possibly been doing to him for him to do this to me?” Spencer said.

She contacted the Office of Victims’ Rights, a state agency that advocates for crime victims.

The agency’s executive director, Taylor Winston, reviewed her case and asked Novak to reconsider his decision not to file charges. She questioned whether all the available evidence had been looked at.

“We thought there was some viability to the case,” Winston said in an interview.

In a letter, Novak responded that it was “less than clear” Spencer’s confrontation with Florida earlier in the day was legal. He said statements were inconsistent.

“It is this office’s evaluation that it cannot prove beyond a reasonable doubt that the assaultive conduct in Mr Mosley engaged (sic) was not justified under the applicable law of self-defense,” he wrote.

Winston also asked the municipal prosecutor’s office, which prosecutes lower-level misdemeanor offenses, to look at the case. The office declined.

The Office of Victims’ Rights could do no more.

“I feel really bad for Flossie. She’s a very sweet, smart lady. A veteran,” Winston said. “A lovely lady and this horrible thing happened to her. She just didn’t get that justice in the criminal justice system.”

Undeterred, Spencer called the governor’s office, the mayor and other officials. She said she was dismissed by all of them.

She also asked for the police report -- the document prosecutors relied on to make their judgment about the case.

She was told it could take a while. She didn’t realize just how long.

A long wait for a police report

The current wait for a police report or record is 10 months to one year, Anchorage Police Department Chief Justin Doll said in an interview.

The department has a backlog of 4,800 unfulfilled records requests -- including Spencer’s police report.

The wait is “shockingly bad” and clearly unacceptable, Doll said.

Police are asked for their reports for all kinds of reasons, including insurance claims and civil lawsuits. But they can’t just hand them over, Doll said. APD employees redact them to remove personal information such as the Social Security numbers of witnesses.

Right now, that’s being done by hand, a time-intensive process, he said.

Doll pointed to understaffing combined with an increase in requests for reports as the reason for the backlog. As the department has added officers over the last few years, records department staff hasn’t grown to keep up.

Right now 33 people work in the department, fulfilling lots of other duties beyond responding to public requests for documents. Eight positions are open.

“It’s not because people aren’t working as hard as they possibly can,” Doll said. “They are.”

Reducing the wait to no more than 10 business days is the department’s top internal goal for 2020, he said.

Without the police report, Spencer is out of options even in civil court, said Winston.

“If she can’t get the police report it’s pretty hard for her to take her case to any lawyer,” she said.

There is no tidy resolution to the story of the frying pan that hit Flossie Spencer in the face. It’s still jagged and painful, like Spencer’s scar.

Mosley is living in his car, unemployed and stewing in anger over the Arctic Bed and Breakfast.

“They about killed me with that pepper spray!” he said. “I should sue them.”

Spencer isn’t giving up. Her best hope is to find a private attorney who will pursue a civil lawsuit.

But for now, she’s deep in a swamp of frustration.

Frustrated with the notion that she somehow brought the injury on herself, or broke the law. Spencer said if she were in the wrong, the Office of Victims’ Rights wouldn’t have taken up her case.

“It’s like the (district attorney) is saying I deserved it, somehow,” she said.

Frustrated she still doesn’t have the police report. Frustrated that no one has yet faced any consequence for an injury she’s reminded of constantly.

Spencer still works at the Arctic Bed and Breakfast. These days, she doesn’t go to tenants’ doors.